VIENNA - Image display firm Barco is treating attendees at ECR 2016 to a look at its updated line of Coronis Fusion medical display monitors.

Barco has refreshed the Coronis Fusion family in 6-megapixel (MP) and 4-MP configurations -- with improved technical specifications and other enhancements. For example, the new generation sports brightness of 600 candelas, a 50% improvement compared with 450 candela brightness on the older Coronis Fusion monitors.

The new monitors also have better contrast ratio, of 1,500:1 compared with 1,000:1 on the previous line. The monitor also corrects automatically for pixel nonuniformity at the pixel level, according to the company.

The result of the enhancements is a monitor with less noise and sharper, crisper images, with darker blacks. The displays come with Barco technology found on the previous generation of Coronis Fusion, such as the company's iGuard luminance stabilization technology and SpotView Mag mode, which enables users to focus on details in a region of interest with a highlighted area while the rest of the area on an image is darkened.

Barco is also offering an improved warranty on the monitors, consisting of five years for all components. The 4-MP version will begin shipping soon, with the 6-MP version following in the third quarter. 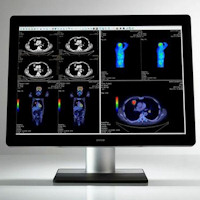 Barco unites medical displays with Uniti launch at JFR
In the world of medical displays, a gulf has existed between grayscale and color, with imaging facilities maintaining separate types of monitors for optimal...
Copyright © 2016 AuntMinnie.com