March 10, 2015 -- Researchers from Centre de Recherche of the Hospitalier Universitaire de Sherbrooke (CHUS), working in conjunction with the University of Alberta and Advanced Cyclotron Systems, have achieved a major advance by affirming that use of cyclotron-produced technetium-99m (Tc-99m) results in image quality equivalent to that of Tc-99m manufactured in a nuclear reactor.

The findings could significantly affect the quality of patient care and public safety. Producing Tc-99m with a cyclotron powered only by electricity and natural nonradioactive material makes the process more environmentally friendly than the conventional route starting from low- or high-enriched uranium to make molybdenum-99 (Mo-99), the parent radionuclide of Tc-99m, in a nuclear reactor.

What's more, the technology could lead to a regional-based model of Tc-99m production that is more stable and possibly even cheaper than the current system, which relies on a single nuclear reactor prone to downtime -- disrupting the entire radioisotope supply chain.

The exploration to find alternative production sources for technetium-99m, the most commonly used cardiac imaging isotope, stems from a severe shortage in 2009 and 2010 of Mo-99. At the time, a nuclear reactor operated by Atomic Energy of Canada (AECL) was unexpectedly offline for 16 months, severely straining worldwide supplies of Tc-99m.

The disruption spurred the quest to find alternative ways to produce isotopes.

"From that time, the idea of using a cyclotron to produce technetium-99m for human use grew very rapidly in Canada," said Dr. Éric Turcotte, clinical head of Centre d'Imagerie Moléculaire de Sherbrooke.

Indeed, Canada arguably has been at the forefront of innovative Tc-99m production. In January, researchers in British Columbia manufactured a large enough quantity of Tc-99m in a six-hour production run to service some 500 nuclear medicine scans.

At that rate, a single production run would be enough to satisfy the daily demand for a population the size of British Columbia, according to the research team from TRIUMF, the BC Cancer Agency, the Centre for Probe Development and Commercialization, the Lawson Health Research Institute, and the University of British Columbia.

The production process uses molybdenum-100 as a target, which is irradiated with a proton beam from the cyclotron to directly transform it into Tc-99m. To a lesser degree, Mo-99 is also produced during the same bombardment as a side product and could potentially serve as a generator.

"It is a direct production of technetium-99m," Turcotte explained. "You end up with an isotope with a half-life of six hours, which can be used directly without further processing, in contrast to Mo-99 produced in a nuclear reactor that needs to be purified and packaged into a generator to supply the Tc-99m. Of course, you need to distribute and use it as soon as possible." 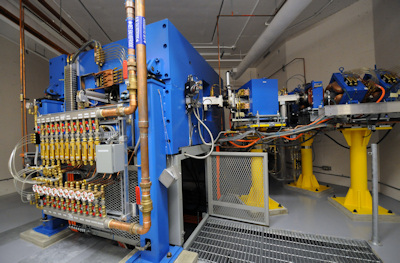 A medium-energy cyclotron with a high current, such as what's installed in Sherbrooke and Edmonton, is the preferred equipment to produce the optimal volume of Tc-99m. These cyclotrons, developed by Advanced Cyclotron Systems, would be useful for provincial production of Tc-99m. Alone, Sherbrooke's cyclotron could produce enough Tc-99m to fulfill 50% of Quebec's needs, the most active province in nuclear medicine in Canada, with 54 centers.

The good news is that Sherbrooke's technology can be replicated in existing cyclotrons.

Global demand for Tc-99m is currently estimated to be about 40 million doses per year, but it's thought that the need will increase by 15% over the next 10 years due to an aging population.

AECL's National Research Universal (NRU) reactor can produce enough medical isotopes to satisfy 30% to 50% of the world's demand, but the reactor is scheduled to permanently shut down in October 2016. The Canadian Nuclear Safety Commission is considering extending NRU's life until 2018 to help with the demand for Tc-99m until other sources are developed.

What Turcotte and colleagues have done is validate the quality of images created with their cyclotron-produced Tc-99m. They did this by injecting 11 patients who had thyroid gland disorders with the isotope.

"We used a thyroid scan because it is one of the only nuclear medicine procedures using pure technetium-99m without labeling," he said.

With the cyclotron-generated Tc-99m, the researchers were able to visualize thyroid disease (autoimmune hyperthyroidism, thyroiditis, and thyroid cancer/nodules) among all 11 patients, just as they would with Tc-99m from a nuclear reactor.

"The human body reacted exactly the way we expected from technetium-99m," Turcotte said. "There were no adverse events."

To confirm image quality, the researchers injected a control group (matched for age and gender with the 11 thyroid patients) with reactor-generated technetium-99m.

"Technetium-99m made from the cyclotron equals technetium-99m from the nuclear reactor," Turcotte concluded. The results show that no matter the source of Tc-99m, "technetium is still technetium."

One noteworthy finding from the Sherbrooke study is that Tc-99m produced with a cyclotron, rather than a nuclear reactor, does not increase the dose to patients by more than 3%.

"It is the impurities in the cyclotron-produced technetium-99m that cause the 3% increase in overall dose to the patient," Turcotte said. "That is not really an issue, but we need to be aware of it. This can largely be avoided by using highly enriched Mo-110 targets."

The Sherbrooke researchers envision extending the use of cyclotron-generated Tc-99m to musculoskeletal and cardiac imaging and possibly ventilation/perfusion studies for pulmonary embolism. Turcotte estimated that those clinical applications account for approximately 80% of the Tc-99m used in nuclear medicine departments.

One important issue that remains is the cost of creating Tc-99m with a medium-energy cyclotron, such as Sherbrooke's, compared with Tc-99m from a nuclear reactor.

"The cyclotron-based production could well be competitive, but we don't know yet the economics of that," Turcotte said. "However, we do know right now that we are paying less than the actual cost to produce technetium from a nuclear reactor, because they are largely subsidized."

The group is now focused on larger-scale production of Tc-99m and distributing the isotope to area hospitals in Quebec in 2016.

If you like this content, please share it with a colleague!
Related Reading
Canadian group reaches milestone on Tc-99m project
Canadian researchers say they can now produce sufficient quantities of the isotope technetium-99m (Tc-99m) in a six-hour production run to satisfy demand... 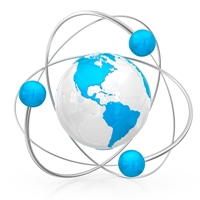 SNMMI: Mo-99 supply issues still shape nuclear medicine
The tenuous supply of molybdenum-99 (Mo-99) in recent years has resulted in a double-digit price increase at many nuclear medicine facilities across the...
SNM: Tc-99m can be produced in cyclotron
A University of Alberta group has determined that high-quality technetium-99m (Tc-99m) can be produced in commercially viable quantities on a 19-MeV cyclotron.
Canadian group hopes to develop technetium-producing cyclotron
The Canadian government has awarded a $3 million grant to the University of Alberta in Edmonton and the University of Sherbrooke in Quebec to develop...
Canada makes investment in isotope production
The Canadian government will allocate $48 million Canadian ($45 million U.S.) in its 2010 budget to support the research, development, and demonstration...
Copyright © 2015 AuntMinnie.com

3/11/2015 11:42:15 AM
TarverForPresident
Well, does that mean Iran can no longer use the "we need reactors to produce radiopharmaceuticals" excuse?


Well, does that mean Iran can no longer use the "we need reactors to produce radiopharmaceuticals" excuse?

Excellent work.  Way to guarantee that this thread ends up knocked over to OT.  ;)

3/17/2015 7:01:21 PM
Thomas McCloskey
An interesting article with potentially large impact for nuclear medicine. Comming from an age where each department milked a generator and ran their own pharmacy I would say this is a transformative event. Things get simpler and easier as well as cheaper.
Post your comment ...