Siemens Healthineers plans to use ECR 2017 this week as the platform to launch Magnetom Vida, a new 3-tesla MRI scanner. Vida is the first system based on BioMatrix, a new Siemens technology that adapts scanning parameters to patient anatomy and physiology.

Magnetom Vida was designed with a variety of new technologies that have a single goal: to make MRI more efficient by adapting scanning protocols to the patient, rather than the other way around, according to Andreas Schneck, vice president of sales and marketing for the company's MR business line. 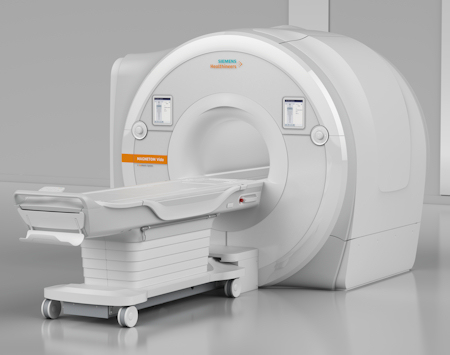 Patient variability such as obesity and respiratory difficulties can make MRI more challenging, especially at the 3-tesla field strength. So Siemens developed BioMatrix to help healthcare providers automatically compensate for this "biovariability."

How does BioMatrix work? One example is the technology's BioMatrix Sensors, which are embedded in the scanner table and track patients' breathing and the ability to hold their breath during a scan. Data from the sensors are fed into the system and help users select the optimal scan protocol, also saving time during the examination.

Meanwhile, BioMatrix Tuners are what the company calls "intelligent" radiofrequency (RF) coil technology that automatically sets optimal scan parameters based on the anatomy of individual patients, without requiring any additional user interaction. The company believes the tuners will help avoid rescans, particularly for whole-body exams.

Finally, BioMatrix Interfaces accelerate the scanning process by up to 30%, according to the company, and enable automated patient positioning based on intelligent body models that automatically move the patient table to the correct scan position. A touchscreen user interface is integrated into the scanner to support one-touch positioning, while a new motorized patient table further simplifies examinations, especially for immobile and trauma patients.

Whole-body scanning is a particular focus of Magnetom Vida. The scans can be challenging as they require highly trained users to cover multiple scan sections. However, the company's new Whole-Body Dot Engine allows whole-body scans to be performed in time slots as short as 25 minutes through automation that enables planning and execution of scans in just a few clicks.

A Vida scanner is already in operation at University Hospital Tübingen in Germany, where users are reporting decreased measurement times for musculoskeletal and prostate imaging studies compared to previous MRI systems, and signal-to-noise ratios for clinical images are up to 30% higher than with previous systems.

Technical specifications of the system include its 60/200 XT gradient system, rated at an amplitude of 60 millitesla/meter and a slew rate of 200 tesla/meter/second that provides more than 2.7 megawatts of power on a system with a 70-cm bore scanner. Siemens is also touting Vida's field-of-view, at 55 x 55 x 50 cm.

Magnetom Vida will occupy a position in Siemens' 3-tesla product line between the Magnetom Skyra scanner and the Magnetom Prisma. Siemens has positioned Prisma as the benchmark for research applications, with gradients rated at 80 millitesla/meter, but that system only has a 60-cm bore, compared with the 70-cm bore on Vida that is friendlier for clinical use.

The company anticipates that clinical shipments of Vida will begin in the summer, following appropriate regulatory clearances in global geographies; a 510(k) submission has been filed in the U.S., for example. Siemens will show a full-size mock-up of the system in its booth at ECR 2017.