April 27, 2016 -- With each new discovery, the Egyptian mummy project inches ever closer to optimizing knowledge about this fascinating ancient civilization. Launched in 2005, the project that studies human remains from the New Kingdom, aims to shed light on both the royal individuals examined and on the civilization in general, including its science, mummification methods, and importantly, the prevalence and treatment of diseases compared with those encountered in modern times.

"The royal mummies of the Ancient Egyptian New Kingdom are by far the best preserved ancient human remains ever discovered," said Dr. Sahar Saleem, a professor of neuroradiology who also specializes in CT mummy imaging. 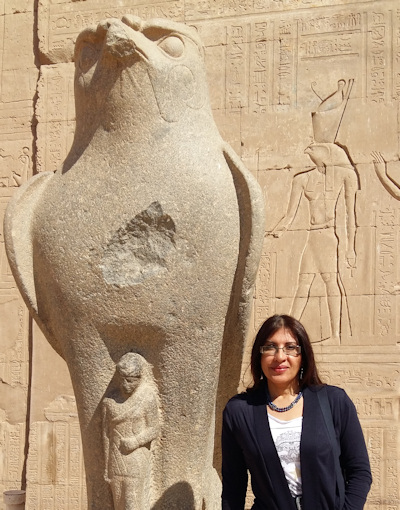 To discover how a subject lived and died, it is important to understand the findings related to mummification procedures, desiccated bodies, and postmortem trauma so as not to mistake them for truly pathological findings, according to Saleem, who cites the broken knee of Tutankhamun, the slashed neck of Ramses III, and the arrowhead inside the chest of the mummy known as Thutmose I as real pathological findings.

Saleem is a veteran of mummy imaging, and in 2012 was part of the research team led by Egyptologist Dr. Zahi Hawass that authored a paper on the results of the CT scan of Ramses III.

In Saleem's most recent research for her newly-launched book, Scanning the Pharaohs, co-authored with Hawass, a new discovery by Saleem herself has led to the hypothesis that Ramses III was probably murdered by multiple assailants owing to various wound types made by different weapons.

"While preparing the book, I re-examined all the CT scans of the royal mummies including Ramses III, which is when I discovered a chopped toe that had previously been missed," she said in an interview. "The edges of the fractured bones of the toe show no evidence of healing; so this must have happened around the time of death. The remaining part of the toe has sharp edges. This type of injury is usually inflicted by a sharp, heavy weapon such as an axe." 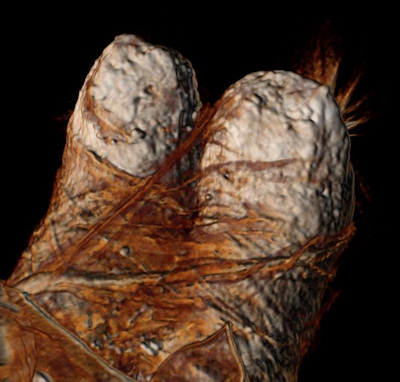 A 3D CT image of the feet of Ramses III: The wrappings are glued with resinous material to hide the injured foot.

Contrary to the injury to the foot, all the soft tissues in the front part of the lower neck of Ramses III were severed, Saleem noted. There was also a small bony defect in the vertebra opposite the wound. This indicates that a sharp weapon such as a pointed knife or a dagger was used.

"The foot is anatomically far from the neck and its injury was likely caused by another assailant who used a heavier weapon that caused amputation of the big toe," she added.

Because the embalmers took good care of the royal bodies, Saleem believes it is unlikely they would have caused such damage to the body. Indeed, there are no signs indicative of postmortem damage induced by embalmers or by tomb robbers on Ramses III. Furthermore, the embalmers made a replacement for the missing toe using linen, similar to how modern prostheses are created in part to visually compensate for missing limbs. 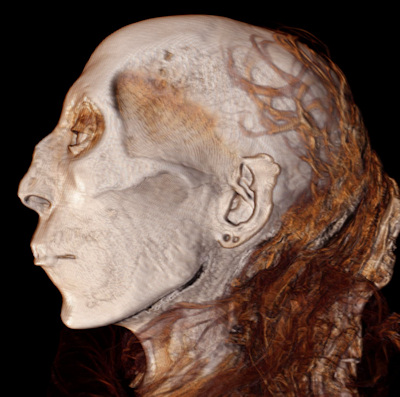 This 3D CT image of the profile of Thuya, great grandmother of Tutankhamun, depicts her facial features, even the two openings in her ear lobe for ear rings, in vogue at the time.

In this case, each foot was wrapped separately with several layers of linen, and glued with resinous material.

Another truth uncovered since the launch of the project, and previously unknown in the literature, concerns the mummy known as Thutmose I.

"The mummy turned out to be that of a young man who had the head of an arrow inside his chest, typical of death on a battle field or in combat. However, history states that Thutmose I died at an older age and nothing is written about his being killed in a war. So we assume that this mummy is for an 18th Dynasty royal or noble but probably not Thutmose I," Saleem said.

The mummies of ancient Egypt also offer a wealth of information regarding the history of disease. 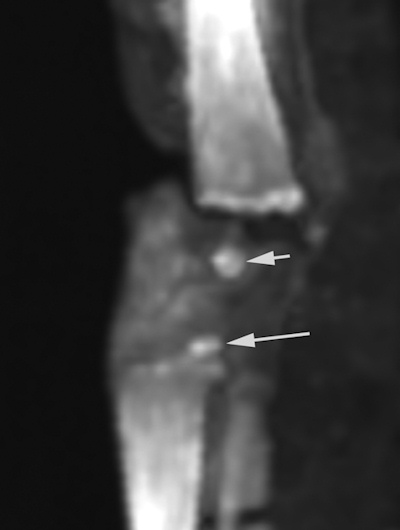 A 2D CT image of the knee of a mummified fetus discovered in the tomb of Tutankhamun and proved to be his daughter by DNA. This CT study was the first ever performed on mummified ancient Egyptian fetuses and is considered a model for any future studies of mummified fetuses. This study estimated the gestational age, gender, and searched for possible anomalies. CT study of the knee of this mummified fetus (assigned as 317b) shows ossified knee epiphyses that helped to estimate an age of 9 months' gestation.

"Using CT, I found that ancient Egyptian royal families suffered from a degenerative spinal disease (DISH) rather than ankylosing spondylitis, an inflammatory type of arthritis, as previously diagnosed from plain-film studies. The research may help illuminate how diseases develop and suggest ways modern people could be affected," Saleem noted. "We aim to continue our studies of mummies from both earlier and later during the New Kingdom era to study differences in style of mummification; mummies of commoners and nonroyal persons; animal mummies; and even objects related to mummies such as coffins and cartonages."

Pharaohs' special beauty treatment for the next world

Ancient embalmers skillfully placed packing material beneath the skin of royal mummies' faces so they would look life-like for the next world, a precursor to modern plastic surgery fillers. Pharaohs' limbs were also stuffed with packing material. Tutankhamun, Ramses III, and most of the mummies of royals of New Kingdom (18th-20th Dynasties) of Ancient Egypt underwent this treatment. It was believed in the literature that such procedures were not performed till a later period (21st Dynasty and afterwards). Saleem's discovery shows the advanced surgical skills and tools of the ancient Egyptian embalmers.

Amulets and jewelry of the Ancient Egyptian royals

CT of the royal mummies helped Saleem to identify objects hidden inside their bodies or beneath the remaining wrappings. In 15 royal mummies, she found 25 objects. The existence of many of these had previously gone undetected by x-ray. The objects included amulets, jewelry, beads, and an arrowhead, among other unusual items. 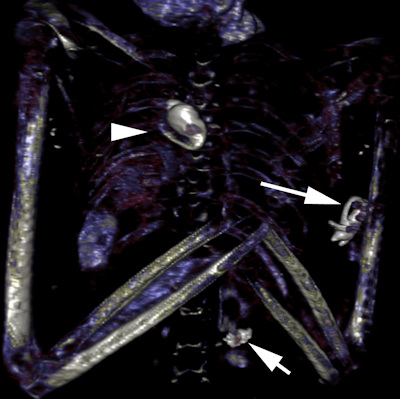 CT attenuation values of the objects suggested they were made from metal (most probably gold), faience, and clay, in addition to other materials. The 2D and 3D reconstruction showed the location and shapes of these objects clearly, which helped Saleem and the team to identify most of the items accurately.

Eleven objects were found hidden in the body of Ramses III and between the wrappings of the body. This was the largest number of objects found in one individual, and they included four sons of Horus (with human, falcon, baboon, and jackal heads) accurately depicted by 3D CT images, as well as several Eye of Horus amulets, and beads. The most peculiar amulet was located inside the chest of Ramses II and measured more than 17 cm in length. 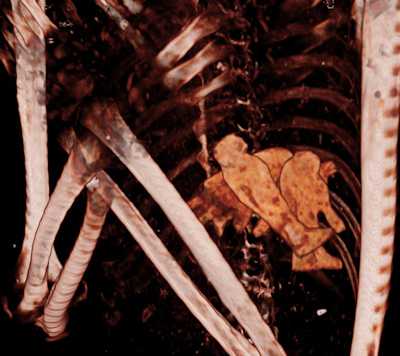 A 3D CT image showing the four sons of Horus within the chest of Ramses III. The head of each statue is well depicted in the 3D reconstruction: a human, baboon, jackal, and falcon.

Another surprise was that Thuya (great grandmother of Tutankhamun) was still wearing beautiful golden sandals hidden beneath the wrappings and no one knew before the CT study. 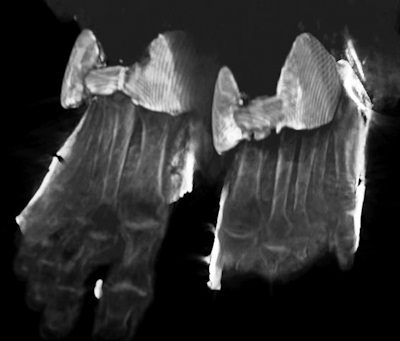 A 3D CT image of the golden sandals worn by Thuya (great grandmother of Tutankhamun) that were hidden beneath her wrappings, a discovery made by Saleem from this CT study.

3D reconstruction of the faces of the royals has provided a closer look at the facial features of the pharaohs and queens.