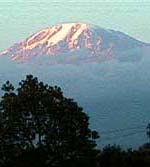 It's a given that radiology practices vary by location, and one might expect extreme differences in a place like impoverished east Africa. But the surprise for U.S. radiologists visiting the Kilimanjaro Christian Medical Center in Moshi, Tanzania, is that even when resources are extremely limited, dedicated individuals can achieve quality radiology.

Dr. Douglas P. Beall, director of interventional services at Sheppard Air Force Base in Wichita Falls, TX, gained this perspective personally late last year, when he spent eight weeks volunteering at KCMC. He's one of several U.S. radiologists who have traveled to Tanzania under the auspices of the East Africa Medical Assistance Foundation, supporting the lifelong work of another American radiologist.

"It is an absolutely unique experience to work in a somewhat technologically dependent specialty in the Third World," says Beall, who has also authored a detailed description of what he saw and experienced in Tanzania. "It was also an opportunity to work with the legendary Dr. Helmut Diefenthal."

Diefenthal, a German-born U.S. citizen, is the driving force of radiology at KCMC and has spent much of his career in medical missionary work, mostly in Tanzania. Prior to his radiology residency at the University of Minnesota, he practiced general medicine in Tanzania from 1960 to 1965. After his residency, Diefenthal returned in the early 1970s to work at the newly constructed KCMC for two years, then resumed a radiology practice with the University of Minnesota and the Veterans Administration for 16 years in order to put his four children through college. He now works at KCMC without salary and personally finances the education of Tanzanian radiology students through his annual six-week working visits to the U.S.

After learning about Diefenthal and the East Africa Medical Foundation from a colleague from Minnesota, Beall travelled in September to KCMC, a 500-bed medical center near Mt. Kilimanjaro and the Serengeti Plain. He wasn't disappointed.

"Working in this environment is so different than in the United States," says Beall. "Your contributions can be literally lifesaving, and small efforts yield large returns in that environment."

While the environment is a challenging one, KCMC's radiology program is a bright spot on a bleak background.

In a country with a population of 32 million and just nine radiologists, KCMC is relatively well-staffed referral and teaching center. In addition to Diefenthal and department head Alpha P. S. Lyimo, a Tanzanian-born, Cuban-trained radiologist, there are four radiology residents and seven assistant medical officers with training in radiology. Other staff include four radiology technologists, one nurse-midwife, one transcriptionist, and four office attendants.

By looking at the images generated by referring centers, one can immediately see the higher quality of radiology at KCMC, says Beall. He gives much of the credit to Dr. Diefenthal's wife, Rotraut (Ro) Diefenthal, who gave up her Ph.D. studies in literature to become a radiologic technologist.

"Her experience as a radiologic technologist allowed her to considerably improve the film developing and the quality assurance processes," Beall writes in his article. "Her attention to detail and leadership by example was also very important in improving patient preparation and positioning to the point that it could be considered outstanding, especially compared to the work produced by departments in surrounding clinics."

But the absence of equipment and other resources at KCMC is also abundantly clear to U.S. visitors.

"The daily work is ... replete with numerous cost-saving measures that would be considered dramatic by Western standards," Beall writes. "The latex gloves are all cleaned and reused. The sheets and pillowcases covering the ultrasound table are left in place for a week and are visibly very soiled by the end of this time period. The primary ultrasound scanning room is divided into two areas by wires and bed sheets hung from the walls, and Dr. Diefenthal's office is used as an additional ultrasound scanning room during the day."

The hospital also has a new government-purchased Philips Tomoscan SR 4000 helical CT scanner. However, since Tanzanians pay their medical bills out of pocket and the charge for a head scan is, at $70.51, "approximately 70% of the monthly salary of an attending specialist physician working at the Medical Center," Beall says, the unit is significantly underutilized.

Finally, there is case after case of pathology seldom or never seen in the U.S, Beall writes, including conditions that allow for a $3.80 ultrasound exam in lieu of a head CT. Beall notes: "(S)ome of the referring pediatricians did not hesitate to order transcranial ultrasounds on children older than five years old because of the high prevalence of intracranial masses so large that the overlying calvaria was thin enough to scan through using almost any available probe."

"The presence of cross-sectional imaging has proven to be very beneficial in evaluating some of the very complex disease that is commonly seen," writes Beall. Also, "Cases seldom or never seen in the Western world, such as rickets or congenital syphilis, are seen with regularity at the KCMC. Plain-film diagnoses of congenital heart disease is not unusual and manifestations of untreated disease are routine."

Because of the complex Tanzanian work-permit process, visiting radiologists are not allowed to participate directly in the daily work environment and cannot generate written reports. Still, by teaching residents and assisting with interpretations, the visitors provide immense benefits, according to Beall. "The visitors are relied upon by the radiology residents and by the personnel from other departments for their diagnostic expertise and their imaging experience," he writes.

"The Diefenthals have managed, through teamwork and persistence, to bring East African radiology out of a primitive state and create an environment where high-quality imaging can be practiced in an austere environment," Beall concludes. "Critical to that success will be an increased willingness of volunteer radiologists to provide humanitarian aid and increased participation by the radiologic equipment corporations to donate and/or maintain the needed equipment."

And for visiting radiologists, Beall says, there is "a guaranteed once-in-a-lifetime experience."

The American Board of Radiology accepts three months at KCMC as part of its radiology residency requirements, Beall notes.

For a more complete description of Beall's recent trip to east Africa, go to our White Papers section.

Let AuntMinnie.com know what you think about this story.