June 13, 2022 -- With the volume and complexity of imaging studies continuing to rise, improving ergonomics in the reading room is more vital than ever, and radiologists may want to consider a "Han Solo" approach, said presenters at the Society for Imaging Informatics in Medicine (SIIM) annual meeting.

A team from Saint Vincent Hospital in Worcester, MA, discussed the importance of ergonimics for relieving common problems that can affect productivity in the radiology reading room, such as neck and back pain. 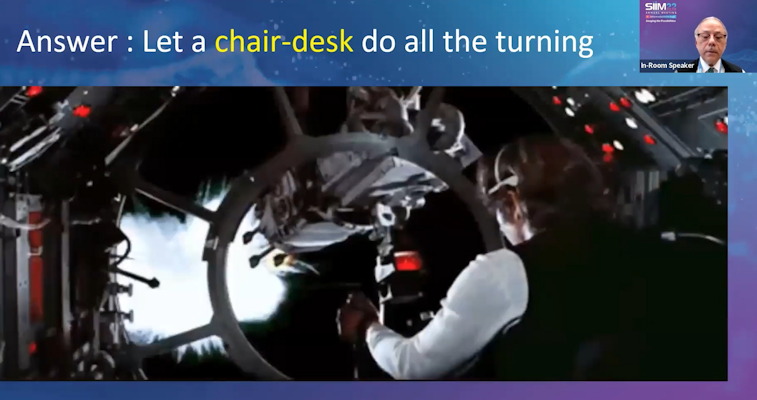 "That's what I feel like when I'm looking for 4-millimeter nodules on lung screening ... if you notice, he did not move his body at all. His head, his neck, his shoulders, and his arms were all set. His chair-desk system moved him," Mukai said.

Radiologists are tied for fourth as the most burned-out specialists, behind urologists and neurologists, according to recent survey findings. Little can be done to fix contributing factors such as increasing workloads or expectations of referring physicians who sometimes want results in under 15 minutes, said co-presenter Dr. Kuldip Mann, a radiology resident.

Variables that can be controlled, however, include improving the setup of hardware and ergonomics. Importantly, optimizing the work environment can be achieved to increase productivity without at the same time increasing stress levels, Mann said.

In a study that considered radiologists' field of vision when studying images, Mann found the "sweet static spot" includes a visual field between 30° and 35° on the x-axis, approximately 15° below the eyeline on the y-axis, and between 20 and 40 inches on the z-axis (distance from the monitor).

"There's less fatigue under these distances," he said.

"You can fit in three 30-inch portrait monitors within the 67-inch diagonal space, and that is what we use at our work to maximize the visual space without causing any stress to the eyes," Mann said.

Then how do I turn my head?

The answer is to let a chair-desk (a la Han Solo) do all the turning, which reduces neck strain, according to Mukai. While few commercial options are available, chairs designed for computer gamers are a good start. But these can be limited in how much they swivel, he said.

The group's latest prototype involved the modification of a standard chair with the help of a local welder at a motorcycle shop, Mukai said. The proof-of-concept chair allows the reader to move to view images on the monitors without moving the head, neck, or torso.

"We can't do the job anymore without something like this. This is mandatory, we must figure out how to do this to survive the ergonomic onslaught," he said.

Dr. Eliot Siegel, a professor of diagnostic radiology at the University of Maryland, closed the session with a discussion of a promising trend for increasing productivity -- the use of human scribes in reading rooms.

Estimates suggest the efficiency of radiologists for performing diagnostic image interpretation is around 15%, meaning that 85% of the time is spent waiting for images, on hanging protocols, and other tasks, Siegel said.

One program headed by Dr. Faisal Sami of Chicago Telerad has seen increases from 15% to up to 70% and a fivefold increase in productivity with the use of scribes, he said. With trained radiologists already in short supply, however, the use of artificial intelligence (AI) software can have a significant impact.

"AI software and natural language software and products that are out there already allow us to do many of the functions the scribes are doing," he said.

Ultimately, AI may allow significant jumps forward -- on the order of magnitude of efficiency increases of up to 200% -- as far as being able to be more productive while minimizing stress, Siegel said. 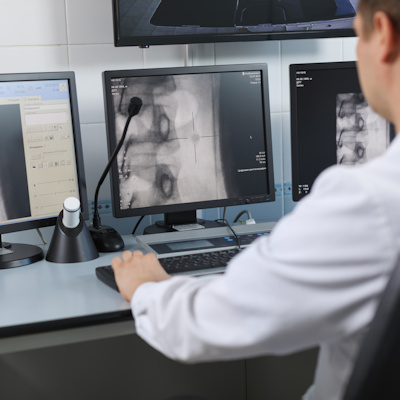 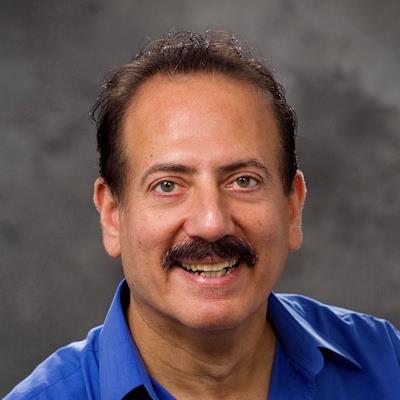 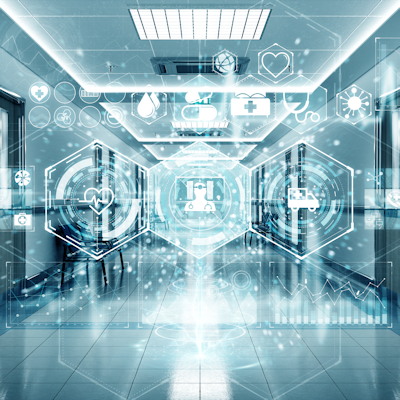 Forum Comments
14 comments so far ...
6/13/2022 6:44:15 AM
Midwest Eastern Rad
Go tell it to the IT department who in my experience, continue to strongly and rudely push back on any request I have for ergonomic devices and so on. And when I have asked lately, they report me to their higher ups for being negative.

It’s a huge issue. How do we try creative solutions when every big institution pushes back and really has the power?
6/13/2022 7:07:57 AM
FlyNavy
Vote with your feet?  Workmen's comp claim? Or point out that the price of a medical malpractice lawsuit settlement would far exceed any IT costs for improved ergonomics ... if leadership is that deaf to the issue however then voting with your feet may be only alternative.  Cost of a Physician search in this current job market would also far exceed any IT accommodations IMO ... perhaps draw up a 2 column comparison with IT ergo costs on one column and Physician search costs on the other

They keep trying to get me to switch to unwired gamer mouses that are more ergo but always interfere with our PACS.

I used to unplug them at every computer I worked at and bought my own mouse.

They also invested THOUSANDS in ergo chairs that kept breaking... so I used to steal chairs from the receptionists and the break room.

6/13/2022 9:16:50 AM
sartoriusBIG
Bring it up directly to higherups. Make a plan to leave and head to greener pastures
6/13/2022 12:53:22 PM
Midwest Eastern Rad
My problem is that I like wireless mice and other devices that need software to be installed. I understand the fears from the owner standpoint but they purposely use their power to smash down any innovation. Moving with feet is hard due to income, and due to the fact that other IT will be just as strict and nasty