May 17, 2018 -- Researchers are developing a PET radiotracer designed to adhere to and illuminate immune cells in cancer patients. They believe it could offer an earlier look at treatment response compared with tracers such as FDG that focus on cancer cells, according to a study published May 14 in the Journal of Clinical Investigation.

The immuno-PET tracer is designed to attach to T cells -- a type of white blood cell -- when they become active and attack cancerous tumors. By viewing their progress on PET images, the approach opens a molecular window to what is going on inside cancer patients, and it could potentially help them avoid toxic radiation and chemotherapy (J Clin Invest, May 14, 2018).

"With a lot of therapies and diseases, we cannot visualize what is going on deep within the human body. It is not the same thing as taking a CT or MRI scan and utilizing anatomy," said senior author Dr. Sanjiv "Sam" Gambhir, PhD, radiology department chair at Stanford University. "We need to visualize molecules, and that is what a PET scan does best. By visualizing molecules, we can elucidate the underlying mechanisms of different diseases and different treatments. Otherwise, we are shooting blindly."

Gambhir has been actively involved in the development and testing of novel PET radiopharmaceuticals and immuno-PET tracers to determine how well they can identify molecules in cancer cells that might prevent a person's natural immune system from attacking the disease.

In an April 2017 paper, Gambhir and colleagues discussed how immune checkpoint inhibitors have emerged as a promising tool for monitoring cancer treatment. However, the lack of imaging methods to noninvasively assess immune checkpoint expression has been a major stumbling block to predicting and monitoring response to therapy.

Gambhir eventually came to collaborate with Dr. Ronald Levy, a professor of oncology at Stanford: By coincidence, both men were investigating uses for a protein known as OX40, which can be activated on T cells.

Levy was working with OX40 to create a tracer that would activate T cells to attack tumors. Gambhir, meanwhile, was looking at OX40 and its role as a checkpoint inhibitor and potential biomarker to assess the efficacy of immunotherapy.

"He wanted to use that target to rev up the immune system," Gambhir told AuntMinnie.com. "We wanted to use OX40 as a marker for highly activated T cells, so we could predict whether a given therapy would work or monitor whether it is working."

Levy's PET tracer features two stimulating agents: One part coaxes T cells into producing OX40 on the cell surface, while the other binds to OX40 and enables the T cells to interact with tumor cells. Overall, the tracer energizes immune cells to destroy tumors. 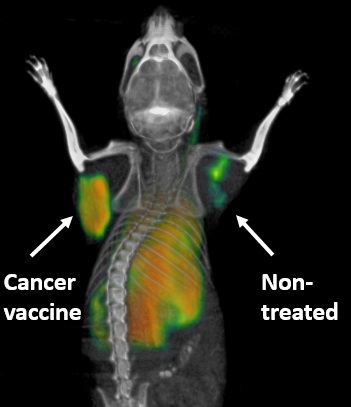 PET scanning technique highlights activated immune cells fighting cancer in a mouse in real-time. The tumor that received a direct injection of the cancer vaccine lights up, whereas the nontreated tumor is quiet. Courtesy of Dr. Sanjiv Gambhir, PhD.

When the PET tracer is injected, it seeks the cancer-killing T cells. As it binds to the OX40, the accumulation glows on PET images, showing the T-cell activation. Little or no such activity on a PET scan would indicate that immunotherapy is not working and the treatment should be adjusted or changed.

This use of PET differs from conventional scans with FDG, which is taken up by tumors.

"Because tumor cells love to eat sugar, they also love to eat FDG," Gambhir said. "That is what produces a hot signal on a PET scan. On a PET scan with FDG, we are looking at where tumors are, not where the immune cells are. So this new scan is not measuring tumor metabolism with FDG, but is measuring activated T cells in the body. By doing that, we can know much earlier whether someone is responding to immunotherapy."

Naturally, if patients are not responding to immunotherapy, it is advantageous for them to find out sooner rather than later.

"If they are not responding, you don't want to wait months to find out because then we are losing time," Gambhir said. "A tumor might grow and become more heterogeneous and that much more difficult to treat.

The primary objective of immunotherapy is to activate T cells and prompt them to kill tumors. From a patient's perspective, immunotherapy also can be advantageous because it relies on natural processing within the body. When successful, a patient might avoid having to undergo radiation or chemotherapy.

"[Immunotherapy] potentially would be less toxic in that we don't have to give all kinds of things that not only hurt tumor cells but also hurt regular cells," Gambhir said. "The whole idea of immunotherapy is giving something that is less toxic and is not dependent upon some very toxic approach that, unfortunately, hurts the tumor but also the patient."

In about four months, Gambhir and colleagues plan to begin a phase I trial to see how well the immuno-PET approach works in humans. Thus far, they have experimented solely on mice.

"Just because things work in mice, of course, does not mean they will work in humans. So there's a big jump now to go to humans," he said. "This approach of using OX40, which sits on T cells, is a good way of therapeutically approaching cancer and, from an imaging perspective, letting us track these immune cells in a new way."

If the combination of PET, OX40, and tracking activated T cells is not successful for cancer, Gambhir speculated that the approach might be helpful for other disorders such as rheumatoid arthritis and multiple sclerosis. 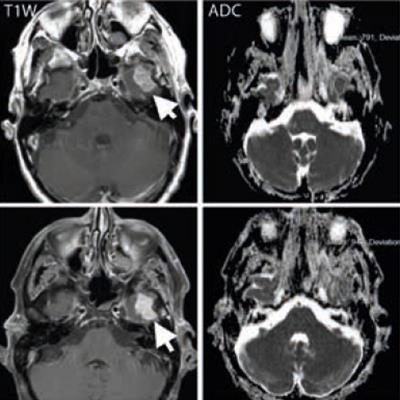 MRI holds promise for immunotherapy but needs more research
Immunotherapy is a booming field, and recent trials have shed light on the effects of these drugs on cancer. A panel of experts will unveil the latest... 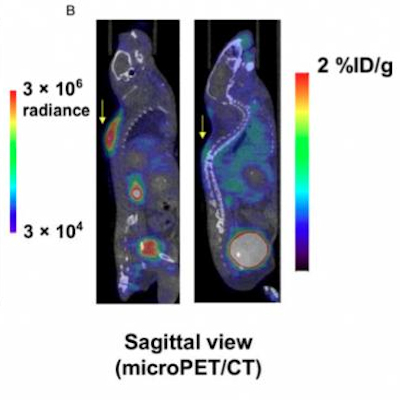 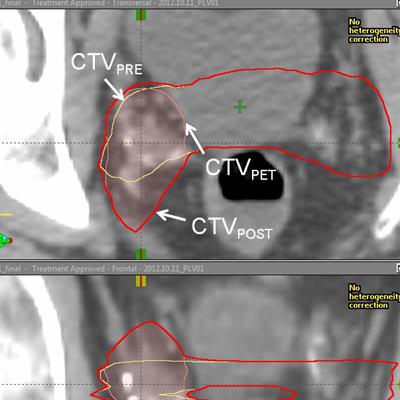 Novel PET tracer aids recurrent prostate cancer patients
A study in the March issue of the Journal of Nuclear Medicine is touting the PET radiotracer fluciclovine F-18 for its ability to guide and monitor...
Radiation, immunotherapy form best team against melanoma
The combination of radiation therapy and two immunotherapies may be optimal for treating metastatic melanoma, according to research published online March...
Copyright © 2018 AuntMinnie.com