November 11, 2016 -- Can mathematical functions from 19th-century France help improve the quality of ultrasound images today? Researchers from the University of Rochester in Rochester, NY, say they can, serving as the basis for a method that uses color coding to reveal fine details that have previously been obscured.

Making use of functions devised more than 125 years ago by French mathematician Charles Hermite, Kevin Parker, PhD, developed what he calls H-scan, an imaging format that can classify tissue structures by size and assign colors based on their ultrasound scatter properties. The method hasn't been tested yet clinically, but Parker believes it could ultimately prove useful in a range of applications, such as identifying and characterizing lesions in the thyroid, liver, and breast. 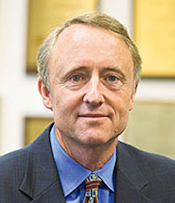 Kevin Parker, PhD, from the University of Rochester.

"It remains to be seen how powerful H-scan will be, but we know that when there is change in cellular-level architecture, then there are changes in the color pattern [assigned by the algorithm]," Parker said. "Potentially, all of the pathologies that actually change cellular-level structure are targets for H-scan."

A typical B-mode ultrasound image is in black and white, with image features displayed in varying shades of black, white, and gray to indicate different densities. These image features are based on the ultrasound scanner's analysis of the reflection and scattering properties of ultrasound echoes -- the sound waves that bounce back to the transducer after encountering acoustic impedance changes in the body.

However, it can be difficult to ascertain finer levels of detail on images, as tissue is essentially displayed as black and white blobs, Parker said.

"The issue of scattering and what's under those black and white dots is a longstanding problem in ultrasound," he said.

One day Parker came across Gaussian-weighted Hermite functions while looking at an ancient math textbook.

"We don't use [these functions] much in the world of engineering that many of us live in who work on ultrasound, but I saw that they had beautiful mathematical properties that looked very applicable to ultrasound and specifically scattering," Parker said. "So that set off a what-if [question]: What if these could be used to understand what is causing the scattering in the echoes that come back? With a little digging around and some research, I was able to develop a whole framework around that." 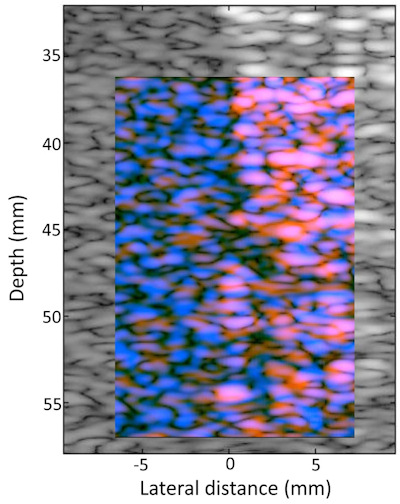 H-scan image of a phantom. The pinkish-red colors indicate larger scatterers, while the blue color indicates smaller scatterers. All images courtesy of Kevin Parker, PhD, and the University of Rochester.

The H-scan technique uses mathematical analysis and, specifically, a matched filter, which matches certain mathematical functions to the ultrasound echo and seeks to determine the best match.

"If it's a really great match, that means it fits a certain pattern and comes from a certain kind of scatterer," he said. "Then we assign colors to that -- typically red, green, and blue colors -- if we get a strong, direct match to these different Hermite functions."

An arterial wall, for example, would represent a larger scatterer, while microvesicles would be a smaller scatterer, he said. Red color shown on the image would indicate a larger object, while blue would be displayed for smaller objects. 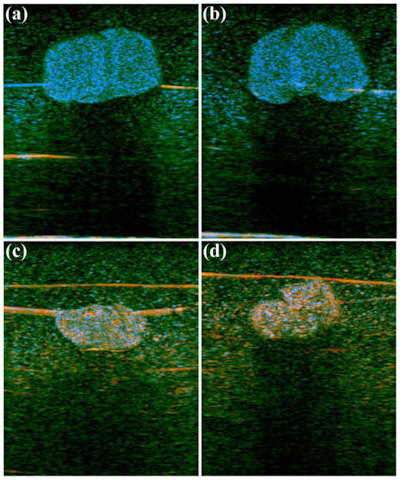 H-scan images showing an increase in fatty lipids in liver tissue (a and b) as well as a normal liver (c and d). The fat deposits in the liver are small scatterers and are shown accordingly as blue dots.

The technique has not yet been applied to real-time imaging, however. Further development of the technology will require getting it in the hands of radiologists, who then would be able to establish typical color patterns for normal findings as well as pathological conditions, Parker said.

"We actually have some data already from Peru that we've been analyzing where a normal thyroid might have a green and blue pattern of color," he said. "However, thyroid cancer would not have that pattern; there would be an absence of blue that would be typical. We have preliminary data on a few pathological conditions such as fatty liver, thyroid cancer, liver fibrosis, and so forth. Where you have pathologies that change the underlying parenchyma, the underlying cell structures, the underlying composition of the tissue, you should see differences in colors [on H-scan]."

Parker envisions that H-scan could be used as an ultrasound mode that can be turned on as needed during scanning. No special hardware would be required.

He believes H-scan will be useful in a variety of specific indications, such as distinguishing between normal and fatty liver as well as characterizing lesions in the liver, breast, and thyroid. H-scan's sensitivity will need to be determined in clinical studies, however.

Parker has worked with UR Ventures -- the University of Rochester's technology transfer office -- to secure a provisional patent for the H-scan technology. They hope to license the technology to vendors, which would evaluate it in clinical trials.

"That's the way to move the technology forward -- get it into systems and get it into clinicians' hands," he said.

While Parker and his team are continuing to refine some aspects of H-scan, such as its signal processing, they are focusing now on researching the range of clinical uses that could benefit from the technology and determining what will be the most important applications, he said.

"Hopefully within the next few months we'll have a much better idea as to a range of applications that look promising," Parker said. 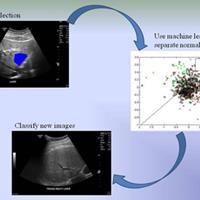 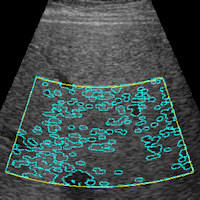 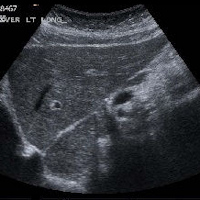 US surveillance of HCC subject to image quality issues
Ultrasound may be the imaging modality of choice for surveillance of hepatocellular carcinoma (HCC) in high-risk patients, but variance in exam quality...
Copyright © 2016 AuntMinnie.com