December 17, 2013 -- In the first study to examine physician burnout using functional MRI (fMRI), researchers found that residents' clinical reasoning is more profoundly affected by the syndrome than that of faculty physicians. Results were published in Frontiers in Psychiatry.

Investigators from Uniformed Services University of the Health Sciences and several other institutions used whole-brain fMRI scans to determine blood-oxygen-level dependent (BOLD) signal in residents and physicians. Higher depersonalization and emotional exhaustion scores were linked with lower and higher BOLD signals, respectively, in certain areas of the brain when residents addressed clinical questions, suggesting an impairment in their clinical reasoning skills.

On the other hand, faculty burnout had no effect on BOLD signals, possibly because cognitive reserves are greater among faculty members, the authors speculated.

"Residents appear to be more susceptible to burnout effects on clinical reasoning, which may indicate that residents may need both cognitive and emotional support to improve quality of life and to optimize performance and learning," wrote Dr. Steven Durning, from Uniformed Services University's department of medicine, and colleagues (Front Psychiatry, October 15, 2013).

Characterized by "emotional exhaustion, depersonalization, and a low sense of personal accomplishment," burnout has been identified in 40% to 50% of physicians, residents, and medical students, the authors wrote.

"It is believed that recurrent stressful interactions with patients lead to high emotional exhaustion and depersonalization (e.g., burnout)," they wrote. "This high prevalence is alarming as multiple studies have found that burnout can negatively impact self-reported quality of care rendered to patients."

"Cognitive control is experience-dependent, and encompasses information-processing ability, attention allocation, and resultant behavior," the group explained. "The prefrontal cortex is central to this process, integrating sensory information, goals and rules, and influencing the coordination of behavior via temporal, parietal, and motor cortices. Deficits in cognitive control can manifest as limitations in attention, memory, and comprehension, which are all relevant to clinical reasoning."

Outside the MRI magnet, study participants completed a two-item burnout scale, which included an assessment of emotional exhaustion and another item assessing depersonalization. The researchers then correlated these scores with BOLD signals from fMRI scans acquired while participants considered and answered clinical questions from U.S. medical licensing exams.

Among faculty, covariate analysis of measures of depersonalization, emotional exhaustion, and overall burnout showed no significant correlation with BOLD signals while answering and reflecting. In this group, the results suggest there is no relationship between degree of burnout and activity in cognitive control regions such as the prefrontal cortex.

The results from residents told a different story, however. Among residents who self-reported emotional exhaustion, covariate analysis showed increased BOLD signal in the right middle frontal gyrus and right posterior cingulate cortex while they answered clinical problems. No significant link was found between emotional exhaustion and BOLD signal while residents reflected on clinical problems.

For those who reported depersonalization, covariate analysis showed significantly decreased BOLD signal in the bilateral precuneus during the question-answering phase. In addition, statistically significant decreases in BOLD signal were found during the reflecting phase in the right middle frontal gyrus and the right dorsolateral prefrontal cortex (DLPFC). 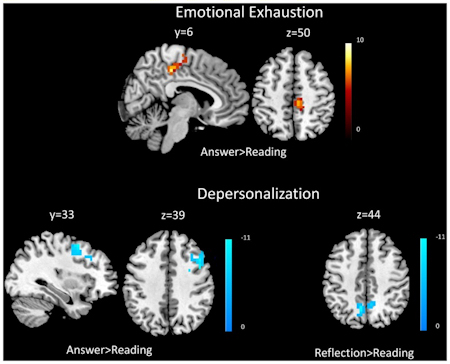 Top: Covariate results for emotional exhaustion and beta values for the answer phase compared with the reading phase for residents. Bottom row: Covariate results for depersonalization and answering vs. reading (left) and reflection vs. reading (right) for residents. The color bar denotes the t-scores of the estimated slope of the beta values versus the covariate. Image republished from Durning et al in Frontiers in Psychiatry.

Finally, a composite burnout score showed a statistically significant increase in BOLD signal in the right middle frontal gyrus and right posterior cingulate cortex during the answering phase; it also showed a decrease in the right DLPFC during the reflecting phase, the researchers found.

"This is the first study to demonstrate associations between burnout, a prevalent phenomenon in physicians, and functional MRI findings," Durning and colleagues wrote. "Specifically, we found that depersonalization scores are associated with reduced BOLD signal in the DLPFC, precuneus, and middle frontal gyrus, and that emotional exhaustion scores are associated with increased BOLD signal in the posterior cingulate cortex and middle frontal gyrus among resident physicians."

Also, consistent with previous studies on burnout, residents were found to have significantly higher measures of depersonalization and emotional exhaustion than faculty. The findings support the group's hypothesis that residents are more susceptible than faculty to the cognitive effects of burnout, specifically while solving multiple-choice questions assessing clinical reasoning.

"This may be due to such examinations being more emotional to this group, given the relevance of needing to pass a [multiple-choice question] exam to achieve board certification," the authors wrote. "Educational theory would suggest that residents may have less cognitive reserve due to less expertise."

The findings support limiting residents' work hours to reduce emotional exhaustion and depersonalization, though more studies are needed to determine if such limits would, in fact, improve performance and reduce burnout, they noted.

Toward this end, strategies are needed both to prevent burnout and to help residents recover from it, the authors concluded. 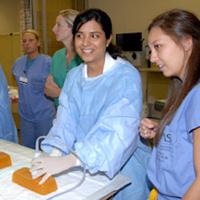 Residency boot camp steels interns for road ahead
When the directors of an Arkansas residency program saw their interns having a hard time transitioning to their second-year radiology residency, they...