CHICAGO -- The diagnosis of electronic cigarette (e-cigarette) or vaping-associated lung injury (EVALI) on imaging exams continues to evolve as reports of new cases emerge daily. A panel of experts on the subject shared their insights into the epidemic in a special interest session at RSNA 2019.

Anecdotal cases of EVALI have been identified in various hospitals throughout the U.S. as far back as 2014, but it was not until examining the flurry of reports released earlier this year that scientists and clinicians have been able to piece together a somewhat fluid set of criteria for diagnosing the condition.

Still, EVALI diagnosis remains relatively uncertain in more cases than not. For instance, a 48-year-old woman recently assessed by Dr. Travis Henry and colleagues at the University of California, San Francisco seemed to meet all of the criteria for an EVALI diagnosis: She had vaped e-cigarettes within the past 90 days, showed pulmonary infiltrates on an imaging exam, and had other possible causes of injury ruled out. Yet the group was unable to state conclusively that her symptoms were entirely due to vaping.

The uncertainty surrounding EVALI stems in large part from the novelty of the condition and not knowing the long-term effects of the disease, Henry told session attendees. "What is certain is that e-cigarettes aren't going away -- there's too much money involved, too much politics, and there is some potential benefit for specific populations."

What we know thus far

As of late November, roughly 2,300 cases of EVALI have been reported to the U.S. Centers for Disease Control and Prevention (CDC) from 49 states (all but Alaska); Washington, DC; Puerto Rico; and the Virgin Islands. The median age of the cohort is 24 years, 95% of the cases have required hospitalization, and nearly 50 patients have died.

Dr. Mark Schiebler from the University of Wisconsin School of Medicine and Public Health mentioned several other findings that help characterize the vaping epidemic, including the following:

For radiologists, perhaps the most important thing is keeping an eye out for lung disease patterns that could indicate EVALI, noted Dr. Seth Kligerman, division chief of cardiothoracic radiology at the University of California, San Diego (UCSD).

"Because many people are just not thinking about it," he said. "And I believe it's very beneficial to think about it because you can help these patients start getting better by getting them on steroids quickly."

After examining at least 65 EVALI cases in just the past several months, Kligerman and colleagues at UCSD recognized four patterns on chest x-ray and CT scans that appeared more often than the rest: 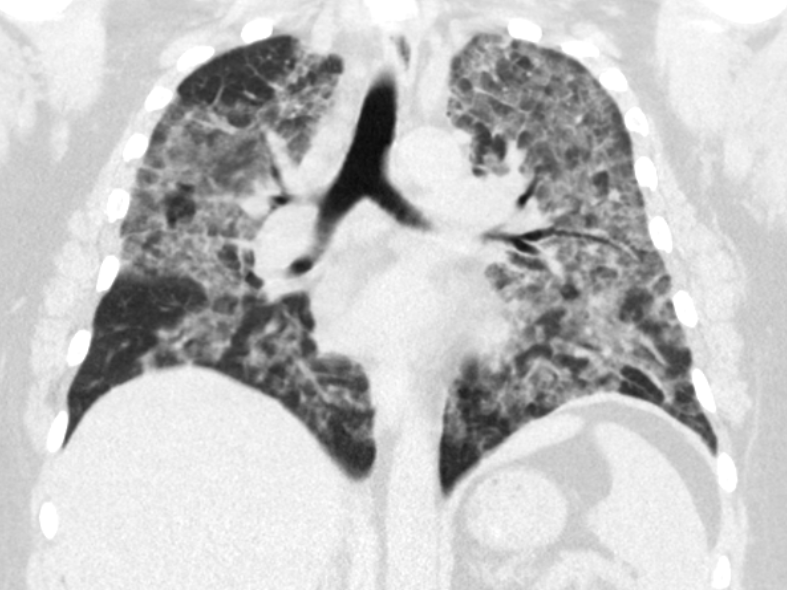 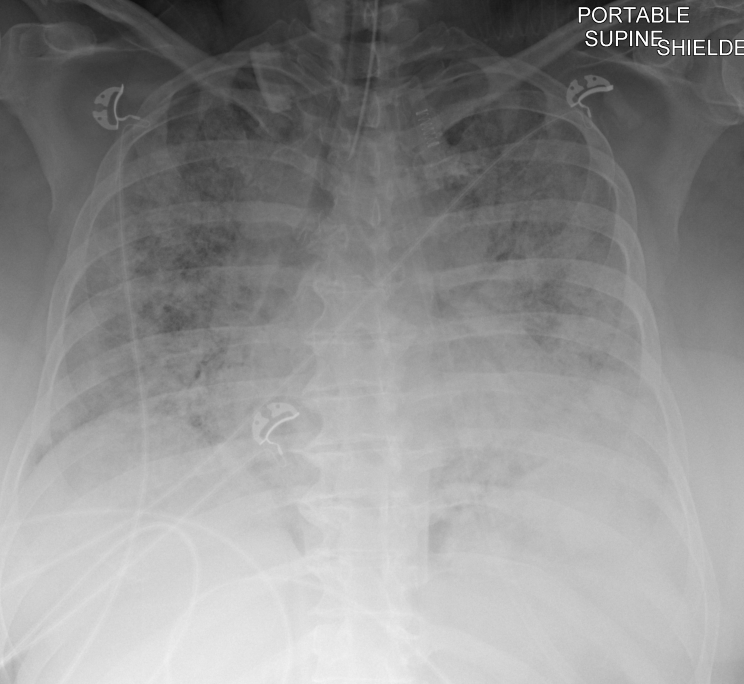 At the Mayo Clinic in Phoenix, Dr. Brandon Larsen, PhD, and colleagues examined histologic sections of cryobiopsy samples and identified centrilobular nodules even at the lowest magnification. Higher magnification of the slides showed acute lung injury patterns marked by fibrin and chronic inflammatory cells, interstitial and submucosal edema, and sloughing of epithelial cells with foamy macrophages and other debris in the airway lumen, among other pathologies.

They also found that many EVALI cases showed lipid-laden macrophages in their bronchoalveolar lavage fluid. The most common pathology injury was organizing pneumonia, but EVALI was not linked to exogenous lipoid pneumonia; pneumonia is characterized by large white holes, whereas EVALI displayed a wide range of injuries in various stages of organization, according to Larsen. Collectively, there was no overarching finding that united all the cases, and the disease processes appeared to be very different on different pathology slides.

What's more, histology confirmed that the presentation of EVALI changed over time, with the first few days dominated by edema and fibrin, inflammation setting in roughly five or six days after diagnosis, and fibroplasia appearing after about seven days. This suggests that the time of biopsy after EVALI presentation could make a big difference, Larsen noted.

"This is the first time I've seen systematic destruction of the lungs like this," Kligerman said to conclude the session. "And these are just the acute injuries. We don't know about the long-term consequences of this. ... In 20 to 30 years -- or maybe in five years -- are we're going to be having an outbreak of a severe interstitial lung disease we haven't seen before? We just don't know." 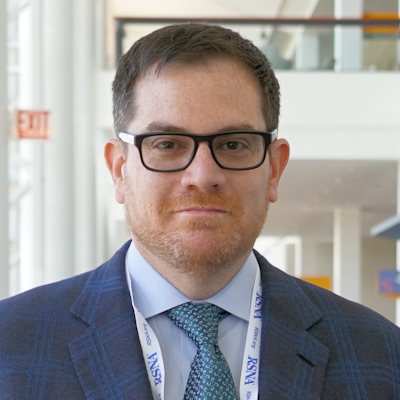 Video from RSNA 2019: Vaping and lung disease
CHICAGO - The connection between e-cigarette vaping and a series of mysterious lung ailments in young people has mystified healthcare providers and the... 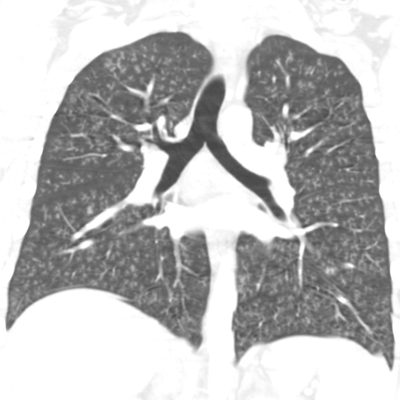 Vaping case in Canada unearths new lung injury on CT
As the vaping epidemic continues to unfold, a new case study centered on a previously healthy 17-year-old male has revealed yet another clinical indication... 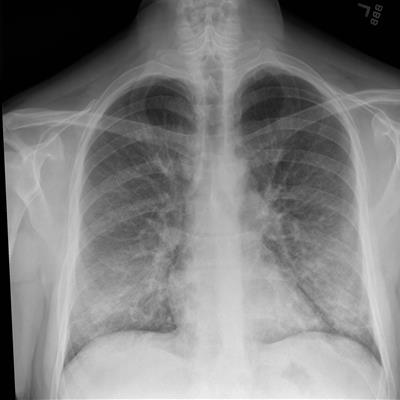 Researchers propose guideline for EVALI diagnosis
Researchers have developed a preliminary guideline for the clinical management of cases of electronic cigarette, or vaping, product use-associated injury... 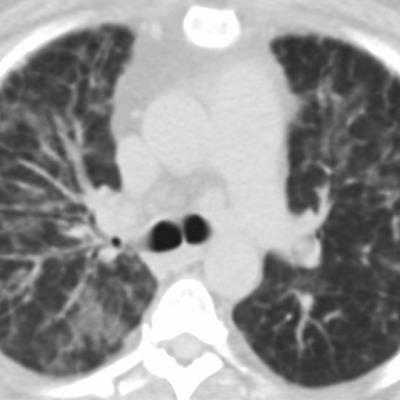 How to spot vaping-associated lung injury on imaging exams
Lung injury linked to electronic nicotine delivery systems -- or vaping -- is recognizable on medical imaging exams, and radiologists are key to identifying... 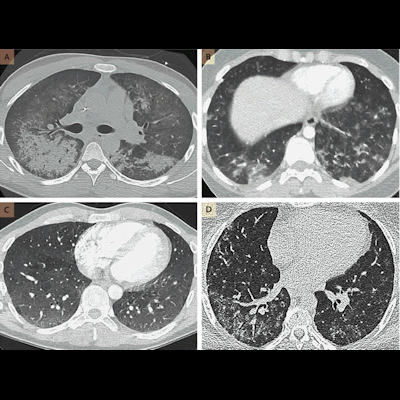 Vaping provokes lung disease in healthy individuals
Researchers from the U.S. have linked vaping to the development of severe respiratory illnesses identified on CT scans, according to a report published...
Copyright © 2019 AuntMinnie.com