It's always a challenge to encapsulate an extravaganza as sprawling as the RSNA conference into neat little compartments. The fable of the blind men trying to describe an elephant comes to mind -- an apt analogy for trying to get a handle on a six-day tour de force that often leaves attendees exhausted and overwhelmed. 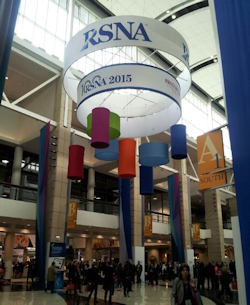 But some trends can be derived from this year's meeting. The future of the RSNA show -- and radiology in general -- has been under heavy scrutiny since the medical imaging market turned south several years ago. This year's show prompted renewed concern as traffic on the exhibit floor was shockingly light on Sunday -- informally known as "International Day" for the number of attendees from outside the U.S.

Fortunately, more attendees showed up on Monday, and traffic levels returned to those seen in the past several years. We won't have a clear idea of where attendance stands until final audited numbers are released later this month.

Until then, the following article reviews the major trends at RSNA 2015. We enjoyed bringing you our coverage of this year's show; be sure to check our RADCast @ RSNA for all of our reports.

At last year's RSNA show -- its 100th edition -- the meeting focused on radiology's illustrious past, from the discovery of x-rays by Wilhelm Roentgen in 1895 up through the latest hybrid imaging technologies such as PET/MRI. This year, RSNA cast its gaze forward, looking at the trends that will shape medical imaging in the years to come.

In his opening address, RSNA President Dr. Ronald Arenson paraphrased a line from the classic 1970s science fiction TV show "Star Trek," urging radiology professionals to "go boldly" into the uncertain future of healthcare. That may be easier said than done, though. 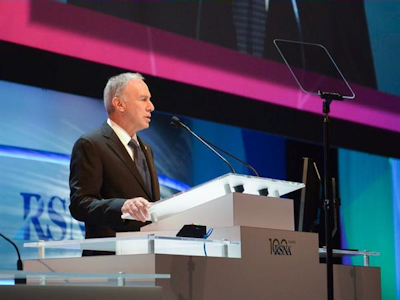 Radiologists are being told to "add value" to the healthcare experience by interacting more with patients, but it's not a role that most radiologists are comfortable with -- and it's not totally clear that it's what patients want either (previous research has indicated that most patients prefer communicating with their referring physicians).

But some trends may be working in radiology's favor. The move toward personalized medicine and data analytics will enable radiologists to find circumstances where imaging can be used most efficiently and economically. There is no doubt that the future of healthcare will be technology-driven, and it's hard to find a medical specialty more grounded in technology than radiology.

Still, thriving in the future healthcare environment will require more flexibility and willingness to change than what many in radiology have been used to in the past. That sentiment was echoed in a follow-up to Arenson's address, by keynote speaker Dr. Darrell Kirch, president and CEO of the Association of American Medical Colleges (AAMC).

Kirch sees academic medical centers as leading the charge into the new future, and he offered seven suggestions for how they can do it. Key to the transformation will be an evolution from hierarchical, expert-based medical care into a new paradigm that is team-oriented and holistic.

Does radiology have the wherewithal to manage the transition? Only the future will tell.

The power of data analytics

Those who have only been to the RSNA conference in the past few years might find it hard to believe, but radiology's preeminent annual meeting used to be dominated by big iron -- i.e., new, splashy introductions of various imaging modalities. With vendors now largely choosing to debut their latest imaging technologies at other times of the year, informatics has increasingly been in the spotlight on the exhibit floor. 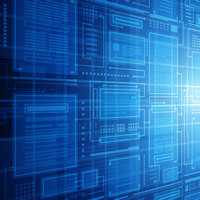 At RSNA 2015, data analytics was among the hot imaging informatics topics in the educational program as well as the subject of several large-scale initiatives from vendors.

Analytics isn't a new concept in radiology. But interest is being propelled by the looming transition from volume- to value-based care. In this new world, radiology practices will have to operate efficiently and, most importantly, produce the highest-quality service and value for referring physicians and patients.

Early applications of data analytics tools such as dashboards that track basic radiology statistics like report turnaround times and imaging volume have been useful, but even more value is just waiting to be extracted from information contained in prior imaging studies and radiology reports. With technology such as natural language processing for analyzing text in reports, data mining and analytics software can also offer the potential of unlocking meaningful improvements in quality for radiology practices, enabling them to demonstrate value and thrive in the future.

A plethora of scientific presentations at RSNA 2015 showed how data analytics can yield real and quantifiable benefits, such as reductions in average scan times and variability in MR studies, as well as shorter waiting times for patients.

On the vendor side, smaller companies may have been among the pioneers for developing data analytics software, but a number of larger firms are also getting involved. For example, GE Healthcare and Dell each announced major initiatives in cloud-based data analytics at the meeting, and IBM's Watson artificial intelligence (AI) software also attracted considerable attention.

Driven by the confluence of market forces and the growing power of commercial software, a new era of data analytics in radiology may be at hand.

If radiology needs a dose of good news in what has been a tough decade for the specialty, the burgeoning science of 3D printing surely qualifies.

Over the course of just a year, 3D models based on CT, MRI, and sometimes ultrasound scans have outgrown their limited role in surgical planning to become an indispensable tool in almost every imaginable application. New 3D printers for the myriad applications come equipped with different kinds of plastics suitable for creating everything from implantable heart valves to quality control phantoms and specialty prosthetics. 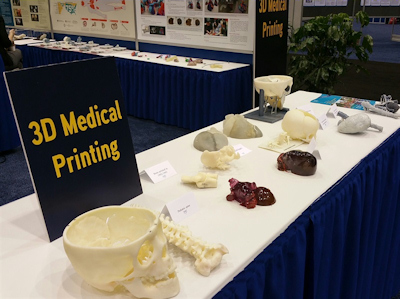 At RSNA 2015, meeting organizers gave the nascent industry room to show off its newfound versatility as well, with a hands-on 3D printing exhibit in the education center. Meanwhile, courses and scientific presentations ran the gamut from cardiovascular applications to how to convert standard DICOM CT images into a 3D model using free open-source software.

One presentation showed how 3D printing is improving the results of breast reconstruction by creating prostheses precisely tailored to the anatomy of breast cancer patients. 3D printing is also helping wounded warriors lead better lives, according to a study from Walter Reed National Military Medical Center. Soldiers who lost arms and legs in Iraq and Afghanistan are able to run on the beach, skate across ice, rediscover weightlifting, and toast a sweetheart by lifting a delicate champagne glass without breaking it, thanks to rapidly created and durable custom prostheses.

As an educational tool, 3D-printed deformable models are invaluable in surgical training to convey complex anatomy and the spatial relationships between organs. An educational session on Tuesday discussed the emerging science of regenerative medicine. Among the examples cited of bioprinting in action, researchers have used biocompatible materials to create complex and functional living tissues to replace defective anatomy, such as to repair a congenital defect in a child's heart.

Breast density notification laws are on the books in 24 states in the U.S., and a federal version is being developed. So it's not surprising that at this year's RSNA meeting, researchers explored not only how to take breast density into account when assessing a woman's risk and which modalities work best with dense tissue, but also questions such as whether the laws have affected radiologists' reporting and who is actually talking to women about breast density and supplemental screening.

One common theme on the clinical side was how automated volumetric software performs in analyzing breast tissue. Dr. Delia Keating at Memorial Sloan Kettering Cancer Center and colleagues compared radiologists' assessment of breast tissue density with that of an automated system. They found that automated breast density software tends to underreport breast density in a clinical setting.

On the practice side, researchers considered whether the laws have affected radiologists' reporting patterns -- and how women are actually getting information about their own breast density. A team led by Dr. Manisha Bahl of Duke University School of Medicine found that breast density notification laws seem to temporarily affect reporting patterns, with radiologists downgrading density assessments in the months after their state passed the legislation. Why? Perhaps because radiologists want to avoid the new reporting requirements, or because they fear their facilities could be overwhelmed by large numbers of women seeking supplemental screening, Bahl said.

Meanwhile, Dr. Shadi Aminololama-Shakeri of the University of California, Davis, and colleagues found that women are seeking information about their breast density and possible supplemental screening from the providers they often encounter first in their screening journey: technologists. But that doesn't let radiologists off the hook, she said: They still have a responsibility to educate women about breast density.

In any case, research presented at RSNA 2015 made it clear that breast density as a risk factor -- and as a clinical challenge -- has become a key part of comprehensive women's breast health care.

Radiologists continue to be worried about job security, as evidenced by talk both in presentation rooms and in the halls of McCormick Place.

One poster presented during the week suggested that radiologists are working twice as hard for the same level of reimbursement paid in 2001. Researchers from Thomas Jefferson University (TJU) found that from 2001 to 2013, the workload of radiologists had nearly double the growth of what they were getting paid, at least in the Medicare system. In particular, things turned south in 2006, with the beginning of a series of reimbursement cuts.

Another study from TJU tracked a steady decline in noninvasive diagnostic imaging per 1,000 Medicare beneficiaries, due to a variety of factors such as reimbursement cuts, radiology benefits managers, and code bundling. The good news is that the once-relentless growth in imaging use has largely been arrested, meaning radiology may escape the scrutiny of federal bean counters in future years.

Anecdotal evidence indicates that the job market could be improving somewhat for radiologists, but there are still perceived threats on the horizon. Some radiologists are viewing the rise of artificial intelligence with trepidation, fearing a future in which scans are read by computers (a fear that most experts believe is misplaced).

Could reducing the number of residency slots help? Most likely it would in the short term, but there are still regional imbalances with respect to where radiologists are working that might result in boom and bust scenarios. And some experts even believe that a shortage of radiologists could be developing as more baby boomers retire and require higher levels of healthcare. 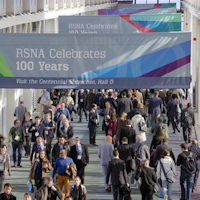 Top 5 trends from RSNA 2014 in Chicago
With RSNA 2014 in the books, now is a good time to look back on the Chicago meeting to identify the major trends affecting radiology. Top stories circulating... 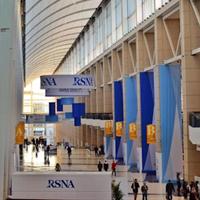 Top 5 trends from RSNA 2013 in Chicago
As it always does, this year's RSNA meeting in Chicago offered an invaluable glimpse of the major issues affecting radiology in 2013. Important trends...
Copyright © 2015 AuntMinnie.com