3D MRI has found evidence of intraplaque hemorrhage (IPH) among diabetics who have no signs of atherosclerotic disease -- a finding that could greatly increase their risk of an adverse vascular event, according to a study scheduled for presentation at RSNA 2015 in Chicago.

Canadian researchers discovered intraplaque hemorrhage in approximately one-fourth of diabetics who had no signs of stenosis or blockage in their carotid arteries. Intraplaque hemorrhage is a stage VI lesion known to increase the likelihood of an adverse vascular event, such as a stroke or heart attack, by five- to sixfold.

Even though IPH is predictive of an adverse event, the condition is not currently part of routine clinical guidelines due to a lack of major trials, said lead study author Dr. Tishan Maraj, an imaging analyst at Sunnybrook Research Institute and Master of Science degree candidate at the University of Toronto. 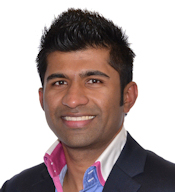 Based on previous research, intraplaque hemorrhage appears to be associated with increasing age, a history of smoking, hypertension, and male gender. There may also be a genetic predisposition to the condition, but Maraj said that hypothesis has not been confirmed.

"Diabetes has not previously been shown to be a risk factor for IPH, but [diabetes] is a known risk factor for vascular and cardiac disease, as well as stroke," he said. "We are thinking that [diabetes] may serve as a link to show one reason why this population may be more prone to developing IPH."

The study being presented at RSNA 2015 is part of an ongoing, prospective dietary clinical trial in which researchers are exploring the effect of a low glycemic index on plaque progression.

Maraj and colleagues analyzed 159 asymptomatic type 2 diabetics with a mean age 63.1 years (± 7.9 years). Approximately two-thirds of the subjects were male, 18% had a history of smoking, and 69% were taking hypertension medication.

"An MRI scan is generally unwarranted if there is no carotid artery blockage, but it is done when there is a cause for concern due to certain symptoms or if the patient has stenosis of greater than 50%," Maraj said. "We took patients who had zero stenosis and performed MRI scans on them."

"The major advantage of MRI is that it has high resolution and can distinguish the different components of plaque: not just intraplaque hemorrhage, but other features such as lipid, calcium, or fibrous tissue," Maraj added.

The difference in vessel wall volume "may sound a bit obvious, but we found it was not exclusively due to hemorrhage itself, but most likely due to other factors related to the hemorrhage," Maraj said. 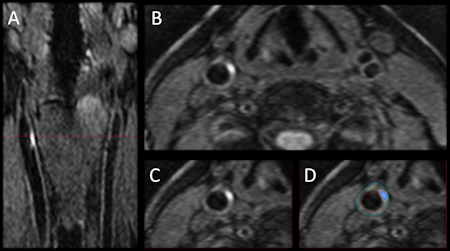 The 3D MRI intraplaque hemorrhage sequence (A) is acquired in the coronal plane. The red dotted line indicates the level at which the reformatted axial plane (B) was obtained. The section of the right carotid artery (C) with a region of high signal is consistent with hemorrhage. Contours are drawn (D) for the outer wall (green) and lumen (red) with the area of hemorrhage (blue). Images courtesy of Dr. Tishan Maraj and RSNA.

The researchers cited other contributing factors, such as age, gender, and body mass index, when adjusted for disease duration, smoking status, high blood pressure, and medications including statins.

More research is needed to determine the clinical significance of the study's findings, Maraj noted.

The researchers plan to follow these IPH patients and monitor the size of their plaques and vessel walls over the next three years. The group is also starting a new study to investigate the prevalence of intraplaque hemorrhage in the general population.

If you like this content, please share it with a colleague!
Related Reading
US spots subclinical atherosclerosis in low-risk women
Carotid intima-media thickness measured on ultrasound can identify asymptomatic cardiovascular disease in most middle-aged women considered to be low-risk... 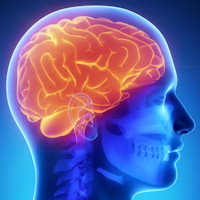 Napkin-ring sign at CT shows vulnerable plaque
CT appears to have a useful way of demonstrating the noncalcified lipid-rich plaques that are at risk of rupturing -- at least the larger ones, according...

Atherosclerosis markers can unravel paradox of Churchill et al
VIENNA - Winston Churchill smoked heavily and was overweight, yet he lived to the age of 90. Others live healthily and die well before 60. Emerging techniques...
Copyright © 2015 AuntMinnie.com