CHICAGO - Although cancers in the U.S. that may be attributable to radiation from CT are low -- estimates range from 1.5% to 2% -- patients still need to be shielded as much as possible, according to a presentation at the RSNA 2014 meeting. And with reusable, lead-free shields, it's not hard to do.

CT represents 10% of all imaging studies performed and 67% of all imaging radiation, according to presenter Dr. Luke Byers, from Imgen in Las Vegas, and colleagues. And about a third of patients who undergo CT have more than three exams.

"It's estimated that approximately 30 million patients accounted for the 85 million CT scans in 2012," Byers said. "It's clear that proper patient radiation shielding is important."

The effectiveness of using CT personal radiation protection has been demonstrated, but no universal policy has been established, he said. For their study, he and his colleagues assessed how effective a reusable, lead-free shielding pad was in lowering radiation exposure for patients undergoing CT.

"The use of ionizing radiation is not without risk, and the amount of radiation that an individual receives is cumulative," Byers told session attendees. "And we're performing more CTs: In 1993, for example, 18.3 million CT exams were performed, while in 2012, there were 85 million."

Byers' group developed a policy under which all patients undergoing CT examinations over a five-year time period (2008 to 2013) were offered a shield developed by Kansas City-based RadPad to protect parts of the body not included in the CT examination.

Between 2008 and 2013, a total of 28,715 CT examinations were performed; 9,331 were of the head and 19,384 were of the body, Byers said. Technologist training and the cost of the shields were minimal, and none of the patients refused the shielding. The researchers monitored the radiation exposure of 112 patients over the study time frame, obtaining 145 CT radiation dose measurements.

The results were dramatic, Byers and colleagues found. "This method of providing personal radiation protection during CT procedures is simple and well-accepted by patients," he said.

Not just for patients

In related research highlighted on Tuesday, Byers and colleagues presented results from a study they conducted to investigate the effect of head shielding for interventional radiologists.

"There is increasing concern that there is a possible causal relationship to occupational radiation exposure," Byers said. "But half of interventional radiologists say that protection isn't readily available, or if it is, it doesn't fit."

Byers' group evaluated the effectiveness of using a disposable, lead-free surgical cap -- also made by RadPad and called the "No Brainer" -- to reduce the risk of radiation exposure for one interventionalist and one assistant during 45 fluoroscopic procedures.

Four levels of shielding were tested:

Dose reductions were high for all four levels of shielding, at 100%, 100%, 96%, and 78%, respectively. Neither the interventionalist nor the assistant reported discomfort from the caps.

"The 'No Brainer' is aptly named, since this simple, inexpensive approach to cranium protection is easy to use, comfortable, and highly effective at decreasing brain radiation exposure," Byers concluded.

Interventional radiologists need to follow shielding protocols
Patients must be protected from unnecessary radiation exposure, but what about radiologists who perform interventional exams, particularly CT-guided procedures?... 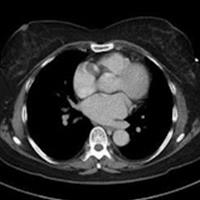