This year marks the 100th annual meeting for RSNA, and the society is pulling out all the historical stops to celebrate. RSNA 2014 attendees will be able to diagnose vintage x-ray images, see Wilhelm Roentgen's laboratory, and check out antique equipment, kicking off a yearlong centennial celebration that will end at the 2015 meeting.

The 2014 meeting will focus more on the history of RSNA and radiology, while the 2015 meeting -- which closes out the 100th year of the society's history -- will look more toward future goals, according to Roberta Arnold, assistant executive director for publications and communications at RSNA.

"Throughout the past 100 years, the histories of RSNA and medical imaging have been closely intertwined," she told AuntMinnie.com. "For the society, it's an opportunity to pause, to reflect on what's happened in the past -- not just to look back, but also to see how innovation has come to be and to foster that innovation for the future."

The centerpiece of the celebration is the Centennial Showcase, which will appear at both meetings but with different content. At the 2014 showcase, visitors will be welcomed by a virtual version of German physicist Wilhelm Roentgen, who discovered x-rays in 1895. In addition, an "Our Milestones" multimedia presentation will cover significant events in radiology and the history of RSNA.

The showcase will also include "Cases of the Century," which will offer a selection of older, classic x-ray images. Touchpads will accompany the images, and visitors will be challenged to come up with the correct diagnosis using only the information available to radiologists in the past. RSNA has also created a series of five galleries that will reflect the organization's mission and core principles: community, research, education, innovation, and patient care.

There will also be a memory book, in which people can share comments or memories of past meetings, and for the equipment buff, vintage technology from several companies will be interspersed throughout the showcase. This includes the first CT scanner used in North America, provided by the Mayo Clinic.

"I think that will be fascinating because so many people do CT now, so to see the very first one, I think, will be pretty eye-opening," Arnold said.

Moving from historical works to artistic ones, the "Art & Science" part of the showcase will feature a gallery of scientific and artistic images. As part of the celebration, RSNA launched an image contest on its Centennial Website: Images in three categories -- radiology art, most unusual case, and best medical image -- were submitted by users and voted on leading up to the meeting. Winners will be shown in the gallery.

Attendees can also find radiology art in the technical exhibits, which will commence this year with a special opening ceremony led by RSNA President Dr. N. Reed Dunnick. Approximately 30 x-ray "nature scenes" by Dutch medical physicist Arie van 't Riet, PhD, will be shown in a centennial booth. Also in the technical exhibits, visitors can pose with a life-sized Roentgen and see a replica of his lab at the University of Wuerzburg.

After taking in the sights, attendees can move on to the Sip & Savor Social, which will offer drinks, tastings from several local restaurants, and entertainment by the Matt Stedman Band. Also, for those who want to commemorate their visit, RSNA plans to have a photo opportunity, likely featuring the centennial logo, Arnold said.

"It's always exciting and kind of heartwarming how people really get into the meeting, taking pictures, and especially sharing them through social media," she said.

For those who can't make the trip to Chicago, the Centennial Website will stay up through the meeting and during the year, with highlights from the showcase and other content. Looking ahead to RSNA 2015, the anniversary celebration will continue with a black-tie gala for RSNA's Research and Education Foundation, capping off a major fundraising campaign that will launch at the 2014 meeting.

Based on feedback RSNA has received so far, there seems to be a marked level of excitement about the centennial in the U.S. and internationally, Arnold said. They hope the special events will show appreciation for the society's volunteers, as well as give everyone a chance to reflect on and take pride in RSNA, medical imaging, and their own accomplishments.

"This is our chance to celebrate and remember that when there were breakthroughs in radiology, RSNA was part of it -- either showcasing the speakers, [showcasing] the technological innovation, or educating radiologists about it -- so it's very exciting to try to pull this all together at one meeting," Arnold said. "I think people will feel very proud. Not just of RSNA, but of their profession and the part they've all played." 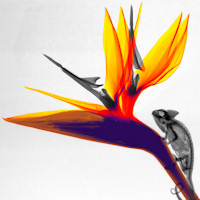 RSNA to show x-ray 'nature scenes' by Dutch medical physicist
What happens if you combine x-rays, creatures large and small, and a diorama? You get a "biorama," as Dutch medical physicist and artist Arie van 't...
RSNA 2014 to celebrate centennial
RSNA will kick off its 100th annual meeting on November 30 with a look back at the organization's role in the history of radiology.

Moments in Radiology History: Part 9 -- RSNA centennial
As RSNA plans to convene its 2012 meeting in just a few weeks, plans are already being laid for the 100-year anniversary of the Chicago congress. In his...
Copyright © 2014 AuntMinnie.com