CHICAGO - More than 30 of Germany's brightest researchers have grabbed the opportunity to display their talents to a global audience at RSNA 2013 in a lavish government-funded initiative. 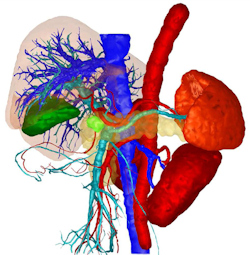 The Quantitative Imaging in Oncology research network is one of the eight research networks featured in the RSNA exhibition. It has developed a workflow software solution that creates visualizations, schematics, and statistics according to quantitative criteria based on image data. Image courtesy of BMBF.

For the second consecutive year, the German Federal Ministry of Education and Research (BMBF) has laid on an exhibition at RSNA showcasing the work of eight groups. The 90-sq-m booth, located in the South Hall of McCormick Place (No. 2965), is part of the international marketing initiative "Germany -- Partner for Medical Technology" under the umbrella of "Research in Germany -- Land of Ideas." The BMBF aims to promote the merits of Germanby as a hot spot for scientific research and industrial innovation.

"Our main aim at the congress is to establish contacts to get evaluation and feedback on the project," he said. "It's so far so good. One senior radiologist from Germany has already told me he wants to try it out in his department."

Teistler has collaborated with Dr. James Brunberg and J. Anthony Seibert, PhD, of the University of California, Davis, and Dr. Jeremy Collins and Pattanasak Mongkolwat, PhD, of Northwestern University in Chicago. By twisting and turning the controller, radiologists can see the beating heart or blood vessels in the brain from any angle. This navigation advancement may help doctors plan complicated cardiac procedures more effectively because the technique makes image viewing easier, more precise, and faster. 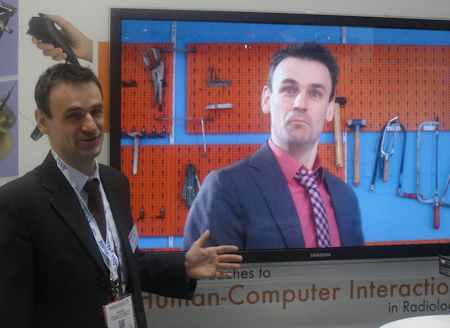 Teistler meets Teistler: As part of the Flensburg University of Applied Sciences' RSNA exhibit, Dr. Michael Teistler has starred in a video himself -- though he stressed that the distinctive pink shirt and tie are not his own.

Leif Schröder, PhD, of the Leibniz Institute for Molecular Pharmacology (FMP) is another beneficiary of the ministry's investment. His work is designed to provide insights at the cellular level. Using xenon gas biosensors, he combines the advantages of MRI with those of PET. Hyperpolarized xenon emits stronger signals in MRI than hydrogen atoms, and this nontoxic inert gas is simply inhaled and then "trapped" in a cage of biosensors within the body, which attach themselves to certain cells. Thanks to the strong signals of the xenon, the biosensors are clearly recognizable in the MR image, which is color-coded. Therefore, differences in the tissues are visible at the cellular level -- without the requirement of mass quantities, as is required with MRI.

Not only tumors, but in theory all pathological changes in the body with a certain molecular signature can be diagnosed using this technique, such as plaque deposits in atherosclerosis or inflammation in cardiac tissue. This would help doctors diagnose cancer patients earlier. 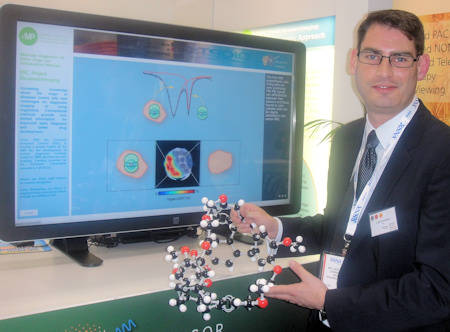 Schröder works closely with researchers at the University of California, Berkeley, who are experts in the chemical synthesis of the biosensors. The team of physicists has developed advancements in the hyperpolarizer, which is important in the magnetization of xenon; they incorporated a more powerful laser and designed a targeted temperature management to counter the overheating of the device that interrupted the hyperpolarization process.

The 3D Imaging in Medicine research network uses a time-of-flight camera mounted on an MRI or CT machine to record movements in 3D. This method of respiratory gating can more accurately target tumors in the lung, for example, sparing surrounding tissues. Image courtesy of BMBF. 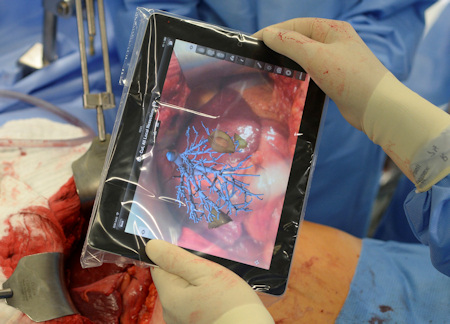 Germany is a leader in the international medical technology community, boasting between 5% and 20% of scientific publications related to medical technology (depending on the topic). According to the BMBF, the German medical technology sector has a world market share of 14.6% and ranks second behind the U.S. No decision has been made yet about whether the BMBF plans to exhibit at RSNA again next year, but it remains a possibility, the organizers said.

Allez-y! French charm offensive hits RSNA 2013
CHICAGO - Gallic genius, flair, and innovation came under the spotlight at the RSNA annual meeting on Monday during a celebration of France's many contributions... 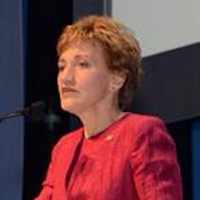 Patients must know your name, RSNA president urges
CHICAGO - Patients should be actively encouraged to know the names of their radiologists, and patient-driven care must become a vital part of radiologists'...
Copyright © 2013 AuntMinnie.com