CHICAGO - An analysis of data from an international study of coronary CT angiography (CCTA) shows that men and women with mild coronary artery disease and similar cardiovascular risk profiles share similar prognoses, according to a study presented December 3 at RSNA 2013.

From the registry, Leipsic's group identified 18,158 patients without known coronary artery disease whose CCTA results were normal or indicated nonobstructive disease, in which coronary arteries were less than 50% blocked. These patients, including 8,808 women and 9,350 men, were then matched on the basis of pre-existing cardiovascular risk factors and the extent of their coronary artery disease as determined by CCTA, resulting in a one-to-one cohort of 11,462 patients.

Analysis of the matched cohort showed that, controlling for all cardiovascular risk factors, nonobstructive coronary artery disease suggested a similar adverse risk of death or heart attack in both men and women. Conversely, the absence of plaque on CCTA suggested a good prognosis for both men and women. Of the patients in the cohort, only 251 experienced a heart attack or cardiac-related death during an average follow-up period of 2.3 years, according to Leipsic's team. 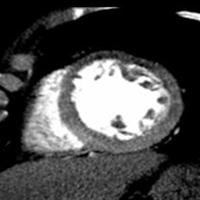 CORE320: CTA-CTP matches SPECT for gauging cardiac disease
The accuracy of 320-detector-row coronary CT angiography (CTA) combined with CT perfusion (CTP) is equivalent to that of SPECT myocardial perfusion for... 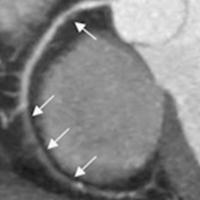 Iterative recon delivers quality CCTA at well under 1 mSv
Researchers from China and the U.S. have succeeded in producing ultralow-dose coronary CT angiography (CCTA) exams in a wide range of patients using iterative...
Same CCTA results mean different risks in men and women
CHICAGO - Researchers have long known of differences between men and women in the rate of cardiac disease and resulting morbidity, but a new study presented...
JACC: CT calcium screening cost-effective only in men
CT-based coronary artery calcium screening in individuals at intermediate risk of heart disease is probably cost-effective for men but not women, according...
Copyright © 2013 AuntMinnie.com