May 2, 2014 -- Researchers from GE Healthcare have set out on their own with Blue Earth Diagnostics, a start-up with plans to commercialize a PET radiopharmaceutical they hope will prove more useful than FDG for detecting and assessing recurrent prostate cancer.

London-based Blue Earth is working with Emory University and GE to continue the development of fluciclovine (also known as FACBC, or anti-1-amino-3-F-18-fluorocyclobutane-1-carboxylic acid), a synthetic amino acid that has shown early promise in phase I and II clinical trials. So far, FACBC has demonstrated the ability to detect local or metastatic recurrent prostate cancer and help determine appropriate follow-up treatment.

The new venture is being headed by Jonathan Allis, PhD, former molecular imaging PET segment leader for GE, who began the entrepreneurial quest about a year ago.

"Last year, I said to my colleagues at GE, 'If I found some money, could we go into FACBC for prostate cancer?' " he said. "They said it sounded like a good idea."

So Allis approached U.K. venture fund Syncona Partners about investing in a new start-up company. Syncona Partners was created in 2012 by the Wellcome Trust, the second-largest medical charity in the world after the Gates Foundation.

Syncona liked the business plan enough to invest 12.8 million pounds ($21.5 million U.S.) in March in Blue Earth, which chose the name based on the history of Wellcome Trust founder Henry Wellcome, who grew up in Blue Earth County in Minnesota.

"We thought we should honor him with Blue Earth Diagnostics," said Allis, who now serves as the company's CEO.

Blue Earth has an exclusive agreement with GE to license FACBC, which was developed at Emory University. Emory initially licensed FACBC to Nihon Medi-Physics in Japan and then to GE for the European and U.S. markets. Under the R&D pact, GE will collaborate with Blue Earth and supply the company with materials for clinical trials. About half of Blue Earth's 10 employees come from GE.

Dr. David Schuster, an associate professor of radiology and imaging sciences at Emory, joined the development of FACBC when he arrived in Atlanta several years ago. At the time, Dr. Mark Goodman, the director of radiochemistry at the university, was primarily testing the radiotracer on patients with brain lesions.

Emory researchers also noticed little renal excretion of FACBC during whole-body PET imaging, so they explored the efficacy of the radiotracer for renal tumors through a grant that Schuster received from the Society of Nuclear Medicine and Molecular Imaging (SNMMI).

It was through this investigation that researchers stumbled upon FACBC's benefits in prostate cancer, thanks to a patient with a large renal mass and many enlarged retroperitoneal lymph nodes.

"Putting two and two together, one would think this is a renal cell cancer with lymph node metastasis" Schuster said. "When we did the FACBC study, the renal mass did not have much more uptake than normal renal tissue, but the lymph nodes had very intense uptake. This was a very strange thing to us. Why would the lymph nodes have higher uptake necessarily than this large mass that was renal cancer?"

Surgery revealed that the renal tumor was benign but the nodes had prostate cancer. They knew the patient had prostate cancer, but the consensus was that the disease was quiescent, said Schuster, who is also director of Emory's division of nuclear medicine and molecular imaging.

"This led us to see if this radiotracer would be good for looking at prostate cancer, specifically because of its low native urinary excretion," he said. "If you look at the history of medical science, it is taking advantage of the unexpected."

Schuster and colleagues followed their discovery with a pilot study of FACBC for primary and recurrent prostate cancer. With just a few patients, they began to see the utility of FACBC with PET/CT for detecting lymph nodes that would be considered normal with other modalities.

The promising results led to a grant from the U.S. National Institutes of Health, with study findings published in Radiology in 2011 (Vol. 259:3, pp. 852-861). In the study, Schuster and colleagues compared FACBC-PET/CT to SPECT/CT with indium-111 capromab pendetide (ProstaScint, Cytogen) for detecting recurrent prostate cancer. 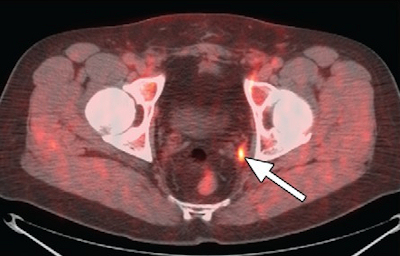 Images of a patient who underwent a radical prostatectomy. Fused PET/CT scan with FACBC (above) shows 5-mm recurrence in the left obturator lymph node. There is no uptake of indium-111 with SPECT/CT (below) in same region (arrow). Images courtesy of Radiology. 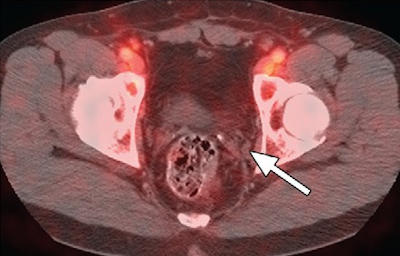 So far, more than 500 patients have been evaluated using FACBC, and multiple research studies are ongoing in the U.S., Europe, and Japan. While the early results are "very promising," according to Schuster, more patients must be investigated in a multicenter trial.

"Nothing is perfect," he added. "Every single technique that we have ever looked at, especially for prostate cancer, has advantages and disadvantages and benefits and limitations. They key is, is it going to be an incremental step forward from what we have? Right now, it looks like it will be an incremental step forward, but it has to be tested within a multicenter trial with many more patients than have been studied to date."

Schuster is also collaborating with Dr. Ashesh Jani in Emory's department of radiation oncology to investigate FACBC in patients with suspected prostate cancer recurrence after prostatectomy.

"We use FACBC to determine how to modulate the radiation therapy these patients receive," he said. "The study is randomized with half of the patients receiving FACBC, while the other half have only conventional imaging."

The goal is to determine whether adding FACBC to the patients' workup results in a more durable cure when radiation therapies are used. "In other words, helping to direct radiation therapy to the correct areas," Schuster added.

Another project uses FACBC with patients who have not had a prostatectomy, but who have received radiation therapy or cryotherapy. "We are evaluating both FACBC [PET] alone and MRI alone, and fusing [the images] together to help determine areas of potential recurrence," Schuster said.

Blue Earth is in the middle of designing a phase III trial for FACBC and hopes to begin the study sometime this year. In the meantime, Allis and colleagues plan to speak with the U.S. Food and Drug Administration (FDA) in June about a pathway to regulatory clearance for FACBC.

And as for his entrepreneurial adventure with Blue Earth, Allis described it as "exciting."

"Obviously, it is a hugely different experience being part of an enormous company and now all of a sudden being part of a small company," he said. "So, we have to work out how we buy envelopes, paper, and other things. We are having a lot of fun actually."

New tracer shows promise for PET/CT prostate imaging
One in six men in the U.S. will get prostate cancer during his lifetime, according to recent data. Unfortunately, conventional imaging techniques are...
Copyright © 2014 AuntMinnie.com