March 29, 2013 -- One of the most remarkable U.S. radiologists in the second half of the previous century was Dr. Russell H. Morgan, the chairman of radiology and the dean of medicine at Johns Hopkins University in Baltimore.

Morgan was a consultant and commander for the U.S. Public Health Service (PHS), helped develop world health chest x-ray protocols for the United Nations International Labour Office, and was the principal inventor of photoelectric x-ray cells and the primary developer of sophisticated chest fluoroscopes.

Morgan was born in 1911 in London, Ontario. His father was an engineer, and young Russell chose a career in medicine, attending the University of Western Ontario in his home town. He moved to Detroit for his internship and a possible degree in pathology. However, he then moved in 1940 to the University of Chicago for a radiology residency with Dr. Paul Hodges, founding chairman of the department of radiology at the university.

During Morgan's first months in his residency, he developed a phototimer to be used on x-ray devices to improve the quality of images. The concept was presented in several journal articles and was adopted by some x-ray manufacturers. 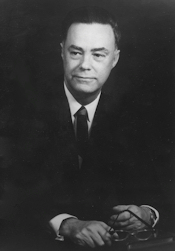 Morgan also worked to refine the x-ray devices to be used for making chest survey films of millions of Americans to detect the presence of tuberculosis. Shortly after he reported the findings of his chest x-ray projects, the U.S. Public Health Service adopted his phototimer techniques and supported him for further improvements.

In 1944, during World War II, Morgan was summoned to military duty. He was commissioned as a commander in the U.S. Public Health Service and assigned to a laboratory in Rockville, MD, next to the nation's capital, where he found himself involved in various Public Health Service activities that also had an impact on military medical units.

With Rockville being a short distance from the Johns Hopkins School of Medicine in Baltimore, Morgan was asked to visit its radiology facility to offer advice on improvements. After several visits, he was offered the position of chairman of radiology, which he began serving in January 1947.

At the same time, he continued his contact with PHS leaders and requested funds to establish research projects for radiology experiments.

Some years earlier, another leading radiologist, Dr. Edward Chamberlain, chairman at Temple University in Philadelphia and a chairman and president of the American College of Radiology (ACR), made a speech at the RSNA meeting, stating that it was important to improve the quality of fluoroscope x-ray devices. With these improvements, radiology body examinations could record and preserve more solid and accurate results for radiologists to report to gastroenterologists, surgeons, and internal medicine physicians for patient treatment.

After he had established his leadership at Johns Hopkins, Morgan added a physicist, Ralph Sturm, who worked on fluoroscope development projects for several years.

"The x-rays produced by the fluoroscope generator pass through the anatomical structure under examination and enter the x-ray image detector unit," Morgan stated in one of his publications on the system. "Within this unit, the radiation first passes through a stationary wafer grid, then impinges upon a fluorescent screen of a conventional zinc sulfide type. The images appearing on the fluorescent screen are then focused on the sensitive surface of an image orthicon by a folded Schmidt optical system consisting of three plane mirrors, a corrector plate, and a special mirror."

"The image orthicon, an electronic tube used in many television cameras, converts the fluorescent images into an electric current which is amplified many times, first by a preamplifier and after that by a final amplifier," the description continued. "Finally, the amplified current is applied to a television viewing tube or kinescope where it produces on the viewing surface of the tube a brightened or intensified reproduction of the anatomical structure being examined."

While Morgan had obtained PHS funds for improvement of the fluoroscope, he made no efforts to patent his inventions and relied on x-ray equipment manufacturers and marketers to adopt his technologies.

As radiology at Johns Hopkins continued to grow in the 1960s, Morgan agreed to adopt a unit of nuclear medicine diagnosis, to accept radiation oncology cancer treatment devices, and to link his radiology department management with the creation of a newly conceived radiology division with the Hopkins School of Public Health. He acquired a large computer and applied his skills for Public Health Service projects and to study the extent and exposure of diagnostic radiology examinations.

He continued as a major advisor of various Public Health Service agencies, and helped to implement the organization of a PHS radiology department. In the early 1970s, he was assigned to a PHS committee that worked with the ACR and the International Labour Office to educate radiologists and pulmonologists about diagnosing and treating coal miners, asbestos miners, and other mineral excavators for lung disease.

At the request of the U.S. National Institute for Occupational Safety and Health, he developed a protocol for the "B reader" program, which oversaw the testing of doctors who wanted to interpret chest x-ray studies of miners and mineral workers.

In 1970, Morgan was considering resigning as chairman of the Johns Hopkins radiology department. With a shift in university management, he was appointed as dean of the university's School of Medicine. He remained on the ACR's task force on pneumoconiosis, and he also served as chairman of the International Labour Office's working committee to define the categories of chest x-ray examinations of coal miners and other such occupations.

As an emeritus faculty member, Morgan died in February 1986; the Johns Hopkins radiology department was named for him at that point.

Otha W. Linton, MSJ, retired in 1997 as the associate executive director of the ACR after 35 years. He also served as executive director of Radiology Centennial in 1995. Mr. Linton holds a bachelor's degree in journalism from the University of Missouri and a Master of Science in journalism from the University of Wisconsin. His work has been published widely in the U.S. and abroad, and he is a regular contributor to several journals including Academic Radiology, the American Journal of Roentgenology, Radiology, and the Journal of the American College of Radiology. He joined the ACR staff in 1961 and had a key role in its growth. Over the years, his responsibilities with the ACR included government affairs, public relations, marketing, publishing, industrial liaison, and international relations. Just before his ACR retirement, he became the executive director of the International Society of Radiology and served in that role until 2012. Also, since his retirement, he has written and published 14 histories of radiology societies and academic centers.

Moments in Radiology History: Part 11 -- The 1st residents
The early years of radiology saw many physicians take up the new discipline with little or no formal training. That soon began to change with the establishment...

Moments in Radiology History: Part 10 -- RSNA show's early days
When RSNA held its first meeting in December 1915, the conference attracted 30 of the nascent society's 62 members to a Chicago hotel. Now closing in...

Moments in Radiology History: Part 9 -- RSNA centennial
As RSNA plans to convene its 2012 meeting in just a few weeks, plans are already being laid for the 100-year anniversary of the Chicago congress. In his...

Moments in Radiology History: Part 8 -- Imaging of black lung
In 1969, the U.S. Congress passed a new piece of legislation on coal mining that called for compensation to miners who had developed pneumoconiosis, or...
Copyright © 2013 AuntMinnie.com