April 29, 2008 -- Researchers are peering through a proverbial glass, darkly, to study the features of ground-glass opacities (GGOs), those hazy, granular-appearing solitary pulmonary nodules that do not obscure the view of underlying structures at CT. GGOs are being detected with increasing frequency as more thin-section CT lung scans are performed to check for cancer in smokers and former smokers.

Distinguishing benign from malignant GGOs is a hit-or-miss task for CT, one that could potentially improve if researchers are able to find reliable signs of malignancy or benignity, thereby reducing the need for invasive biopsy.

GGOs are mysterious at CT due to their varying presentation -- from large to small, focal to diffuse, central to interstitial -- and also owing to the wide range of etiologies they represent. Atypical ductal hyperplasia, fibrosis, organizing pneumonia, adenocarcinoma, and bronchoalveolar cell carcinomas are all possibilities. Most GGOs are benign, but they have an overall higher malignancy risk than other solitary pulmonary nodules.

At the 2008 European Congress of Radiology (ECR) in Vienna, three lung cancer screening studies sought to expand the understanding of GGOs by finding features that heightened the malignancy risk.

A French team evaluated the frequency and natural history of GGOs, while Korean researchers followed GGOs in their screening cohort for five years. A second group from Korea compared CT findings of malignancy and benignity in ground-glass nodules.

Overall, the researchers found that patient age, persistence of GGOs over time, irregular shape, the presence of pleural retraction, and other factors generally yielded a higher risk of malignancy. However, some features such as large size, normally suggestive of an elevated malignancy risk, were also associated with benign etiologies, highlighting the need for frequent follow-up.

All but 2% of the participants in the French lung screening program were smokers or former smokers; the cohort had a mean smoking history of 40 pack years (the equivalent of smoking a pack of cigarettes a day for 40 years).

"Our objectives in this study were first to evaluate the frequency and growth rate of nodular ground-glass opacities ... and second to know the natural history of ground-glass opacities in a screening program for lung cancer," said principal investigator Dr. Gilbert Ferretti, who heads Hôpital Michallon's radiology department.

The subjects underwent low-dose thin-section CT lung screening. The GGOs were first evaluated at baseline and classified according to density, solid or mixed morphology, frequency, and malignancy rate. Patients with GGOs smaller than 30 mm were followed annually for a mean of 24 months. The CT images were reviewed in axial, coronal, and sagittal planes to distinguish nodular, lobular, and flat GGOs, Ferretti said.

Over a two-year period, a total of 867 scans were performed in the 280 patients; 37 had at least one localized GGO and this group had more follow-up scans than the group as a whole, Ferretti said.

The differences in malignancy rates among the studies may be related to different acquisition parameters, such as collimation, as well as reading methods, Ferretti said.

A total of 75 localized GGOs were found in 37 patients, including 41 (54.7%) that were present at baseline and 34 (45.3%) that were detected at one-year follow-up. Of these, 83% were pure GGOs, which were less frequently malignant than mixed GGOs.

The GGOs that resolved were significantly more often lobular (p = 0.006) and polygonal in shape (p = 0.02) compared to persistent GGOs. Most surprising to the researchers were disappearing nodules that were larger at baseline in both axial diameter (p < 0.0001) and height (p = 0.0002) compared to localized GGOs that did not disappear at follow-up. Finally, the vanishing GGOs were more often of mixed density (p = 0.003) compared to persistent nodules, Ferretti said.

"Malignancy (patterns) are clearly different from other studies," he said. "We showed that mixed GGOs are more often malignant than pure GGOs. We also demonstrated that lobular and polygonal-shaped GGOs are a sign of benignity, as demonstrated by other series.... (Large) size, which is usually a sign of malignancy in other nodules, is also a sign of disappearance in our study -- which indicates we should follow these patients."

Differentiation of flat from nodular morphologies is crucial to the prognostic value of the studies, Ferretti added. At baseline screening and follow-up, sagittal and coronal reconstructions should be performed to distinguish flat GGOs from true nodular lesions.

CT images of a 64-year-old man with history of cigarette smoking. Above, thin-section CT reveals two pure 11-mm localized GGOs in the right lower lobe. The two nodules represent different pathologies, however. With the addition of sagittal and coronal reformations in addition to axial images (below), localized GGOs can be separated into those with nodular and lobular opacities, and another group with flat opacities. Nodular lesion at left represents a mixed-subtype adenocarcinoma with bronchioloalveolar component; flat lesion at right represents a region of desquamative interstitial pneumonia. Thus, shape distinctions are important to the prognostic value of the exam. Images courtesy of Dr. Gilbert Ferretti. 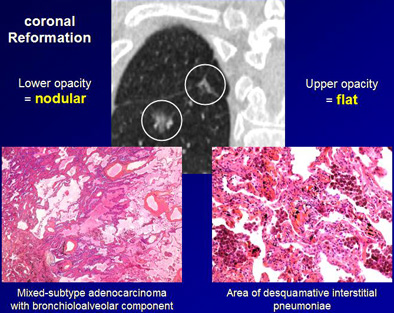 "Some CT characteristics of resolving GGOs and malignant lesions are the same, which indicate that we should follow these patients with short-term follow-up and histological verification," he said.

In another ECR presentation, Dr. Chang Min Park from Seoul National University Hospital in South Korea discussed a study to compare clinical and thin-section CT findings of malignancy and benignity in GGOs.

The study was limited to pure nodular ground-glass opacities (pnGGOs) that did not resolve during a six-month follow-up.

"PnGGOs have been reported to consist of 5.5% to 12% of all CT-detected pulmonary nodules, but pnGGOs are a kind of nonspecific CT finding," Park said. When pnGGOs persist, they have a suggestion of malignancy, but even most of these are benign.

Studies have shown pnGGO malignancy rates of 18% to as high as 48%, but biopsy is often necessary to find the malignant lesions. What's needed is an "accurate estimation between malignant and benign pnGGOs in order to reduce the number of unnecessary surgeries," Park said. "However, most studies had small populations, and do not provide practical differentiation points" between benign and malignant lesions.

Patients with malignancy were significantly older than those with benign lesions (57.83 ± 8.57 years versus 52.19 ± 10.71 years, p = 0.005). Unlike the Ferretti study, but in line with most previous research, the size of malignant lesions was larger than that of benign lesions (10.37 ± 5.74 mm versus 7.93 ± 5.01 mm, p = 0.026). Lesion size 8 mm or larger was determined to be the optimal threshold for differentiating malignancy and benignity with balanced sensitivity and specificity. 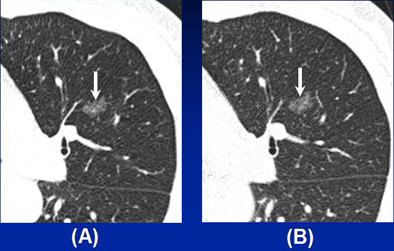 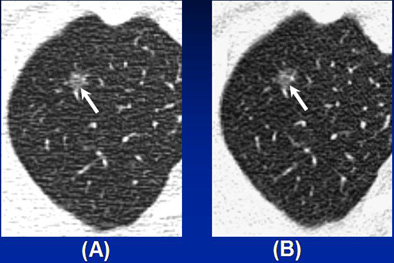 An audience member asked how the findings might affect patient management in borderline cases. "If you find a person on a routine CT scan who is 65 years old and has a 9-mm pnGGO and pleural retraction, would you recommend follow-up or biopsy?" he asked Park.

"It could be a tough question, because we provide a kind of recommendation to a (hospital) panel," Park said. "We should think of the patient's life expectancy. Because, as you may know, the natural course of pnGGO is kind of slow or indolent, and it might not be aggressive compared to a solid mass. So if patients don't have a life expectancy less than five to 10 years, we tend to recommend surgical resection."

In all, the researchers examined 70 patients with pure GGO nodules on a four-slice scanner (MX 8000, Philips Healthcare, Andover, MA). They also recorded the clinical findings, such as age, sex, carcinoembryonic antigen (CEA) levels, and the size of nodules at presentation, along with any changes over time.

At follow-up CT at a mean of 55 months (range, seven to 73 months), GGOs disappeared in 11 subjects. Another 25 subjects were lost to follow-up, leaving 34 patients (17 men, 17 women; mean age 50) with 37 nodules that persisted more than six months or were surgically removed. Lesion size at presentation ranged from 4 mm to 15 mm (mean 8.5 mm).

"Most were 5 mm to 10 mm in size," Kim said. "Twenty-seven (54%) nodules were round, 23 (46%) nonround, and the mean density was -631 HU. Over the follow-up period, 18 nodules in 10 patients changed, most increased in size and density or density alone, she said. "Among these nodules, only one GGO was resected and proved to be adenocarcinoma," she said. That resection was performed after 34-month follow-up showed growth. Two other patients had bronchoalveolar cell carcinomas.

Pure GGOs may not need short-term follow-up, as most cases did not progress to clinical disease, Kim said, adding that more long-term studies with larger cohorts are needed.