Azurion is the product of a multiyear development effort at Philips to provide the interventional tools for this new environment, according to Bert van Meurs, business leader for image-guided therapy at the company. The company worked with leading clinicians around the world on the project. 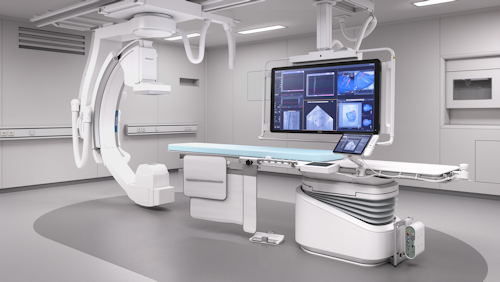 On the hardware side, Azurion includes upgrades to the angiography technology found on the company's previous platform, the Allura and Allura Clarity systems. The design of the C-arm has been modernized, with new flat-panel digital detectors and a new version of the Philips MRC x-ray tube. Philips has also streamlined user controls, with more controls packed into displays so fewer monitors are necessary.

While hardware is important, it's in the software arena that Philips has made major investments in Azurion technology. The company has completely rewritten its interventional operating software, coming up with a new operating system called ConnectOS that enables better integration of real-time information from all the technologies that might be found in an interventional lab or hybrid OR. This is increasingly important as new modalities such as ultrasound and even CT are being used along with angiography x-ray, according to van Meurs.

"The interventional lab needs to support a more broad array of procedures, and more complex procedures," van Meurs told AuntMinnie.com. "It is no longer just about x-ray."

What's more, Philips has also taken a step forward in system design and operation, developing a tablet computer that interventional personnel can use at tableside to control the system. The tablet displays all the information relevant for a particular interventional procedure, and the interface can even be customized for the particular physician performing the procedure.

The new Azurion technologies work together to create what Philips calls parallel working, which enables teams of clinicians to complete different tasks simultaneously in the interventional room, saving time and improving quality of care. Azurion also employs what Philips calls procedure cards, which enable interventional personnel to preprogram routine tasks and user preferences. This reduces errors in patient preparation and can speed up procedures.

The company hopes that Azurion will help users adapt to a healthcare environment that is asking providers to do more with less.

"We see the need for a more economic value proposition," van Meurs said. "How can we do these procedures more efficiently?"