February 23, 2016 -- A solid footing is undergirding the optimism of radiology administrators regarding their business prospects in the first quarter of 2016, according to the latest figures from the Medical Imaging Confidence Index (MICI).

The index for the current period generally continued a recovery that began eight quarters ago, when MICI (a basket of five leading economic indicators that represent radiology administrator sentiment) hit rock bottom in the first quarter of 2014. Since then, the composite index has witnessed steadily rising scores.

MICI is a forward-looking index designed to provide an early view of trends as they develop. It is based on the responses of imaging directors and hospital managers who are members of the AHRA medical imaging management association. Members of the MICI panel are asked about five key trends typically encountered by radiology administrators and what they expect in these areas in the upcoming quarter. The MICI survey is produced by AHRA and market research firm the MarkeTech Group.

Participants were asked to rate their optimism about the five topics, and a single composite score including all five categories also was tabulated. Scores ranged from 0 to 200 and can be interpreted as follows:

MICI scores for the first quarter of 2016 and their relationship to the eight previous quarters are shown in the following chart and table. 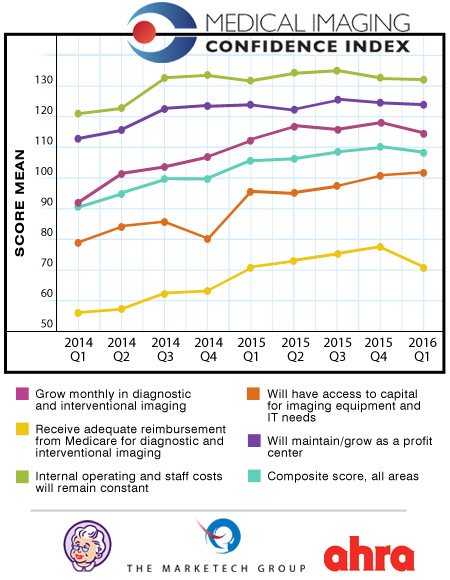 Although the index and several component measures appeared to dip slightly in the first quarter of 2016, the changes were not statistically significant, according to the MarkeTech Group analysts.

At the other end of the scale was confidence in adequate Medicare reimbursement for diagnostic and interventional radiology procedures, with a low confidence score of 71. This countered a trend toward growing (albeit still low) confidence in this MICI metric, although the change from the fourth quarter of 2015 to the first quarter of 2016 was not statistically significant.

As in past surveys, radiologists remained neutral on their confidence in having access to capital for imaging equipment and IT needs, with a score of 102. 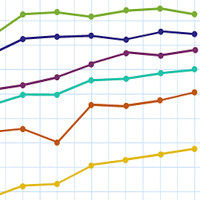 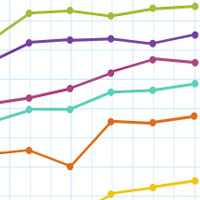 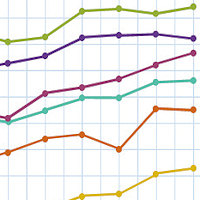 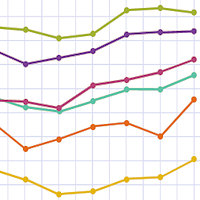 MICI Q1: Positive trends grow as radiology sentiment improves
Radiology administrators in the U.S. continue to show a more positive outlook on their future business prospects, if the latest numbers in the Medical... 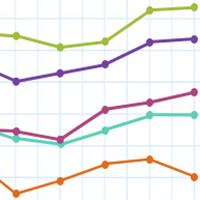 MICI Q4: Rad administrators show acceptance of new reality
It's been said that acceptance is the fifth and final stage of loss. If that's the case, then radiology administrators appear to have accepted that the...
Copyright © 2016 AuntMinnie.com

Forum Comments
28 comments so far ...
2/23/2016 8:48:58 AM
Brian Casey
Please join us starting at 2 pm Eastern time Tuesday February 23 for an AuntMinnie Open Forum in which radiology administrators will discuss the MICI  Q1 numbers and how they reflect their own business operations. This thread will be opened at that time and will be available for your questions.

The goal of this thread is to discuss the first-quarter 2016 numbers in the Medical Imaging Confidence Index (MICI), an ongoing collaboration between AuntMinnie.com, the AHRA, and the MarkeTech Group. MICI is a forward-looking index that measures sentiment of radiology administrators using a basket of important indicators, based on answers to the following questions:


Joining us on this thread through the rest of this week are three radiology administrators who will discuss the Q1 MICI numbers and how they reflect what's going on in their facilities:


The thread is open to everyone's participation, so let's get started! For point of reference, above is a chart indicating the Q1 2016 MICI numbers, compared to the previous 8 quarters. Our full article on the first-quarter numbers is at http://buff.ly/1QwqgJe

2/23/2016 12:09:04 PM
Brian Casey
First question for discussion: The numbers seem to indicate a recovery that began in medical imaging starting in the first quarter of 2014. Does that roughly correspond to what you're seeing at your institution?

2/23/2016 12:32:07 PM
EllenMoss
Brian We ciontinue to see volumes that fluctuate +/- 3% on the outpatient side. Inpateints have been up a bit for the past 2 quarters but early on (July, august) the inpateint volume went the way of the Titanic..The odd thing is all of the modalities seem to move in unison..up or down together