December 30, 2014 -- New research with CT supports the hypothesis that lung adenocarcinoma may spread through the airways and not just through the blood. So-called aerogenous metastasis of lung cancer has implications for staging, management, and prognosis and may be underrecognized, the authors report in the American Journal of Roentgenology.

Lung cancer, the most common cause of cancer death worldwide, has a five-year survival rate of 6% to 18%, the authors wrote. Adenocarcinoma accounts for as many as 30% of cancer cases.

The article, by Dr. Anand Gaikwad and colleagues from the University of Ottawa in Canada, aims to summarize relevant literature on aerogenous metastasis, and explain the likely pathogenic mechanism of aerogenous spread, showing characteristic imaging and pathologic features.

Local venous spread can occur via pulmonary venous invasion and proximal venous metastasis within the lung, but systemic spread is much more common, the authors wrote. Cancer cells pass through common sites of metastatic disease, such as the liver, adrenal glands, bones, and cerebrospinal fluid, before they return to the heart and pulmonary arterial circulation, and ultimately back to the lungs, they explained.

At CT, lesions of such lung metastases spread via the circulatory system are characteristically distributed randomly; round nodules are easily recognizable at CT and pathologic examination. On the other hand, aerogenous metastasis is defined as discontinuous spread of cancer cells from the primary tumor through the airways to adjacent or distant lung parenchyma.

Nodules suggestive of aerogenous spread tend to be clustered, and they always show evidence of growth on serial images, they wrote. In some cases, they progress to confluent air-space disease.

When these metastases are remote from the primary lesion, the nodules tend to have a dependent distribution in the lower lobes. The appearance on CT "reflects cancer cells lining the small airways and alveolar spaces in a lepidic pattern with variable amounts of intra-alveolar material," the authors explained. 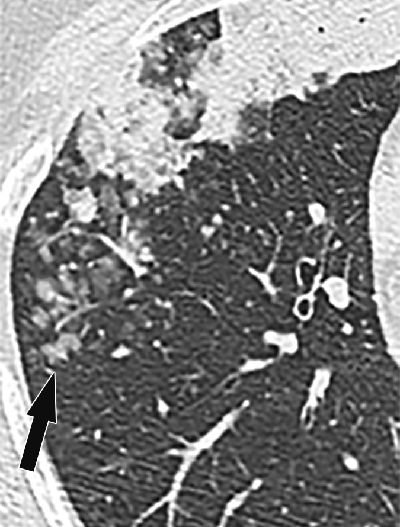 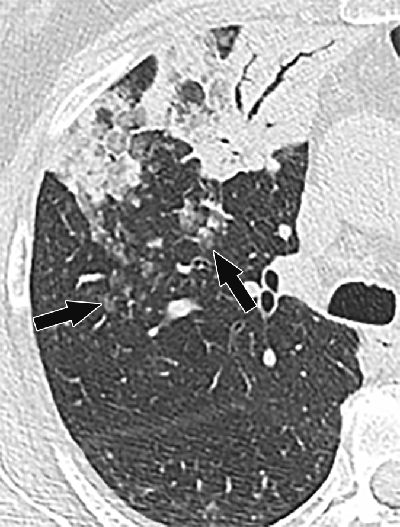 "Growing evidence in the literature suggests that aerogenous spread of lung adenocarcinoma is an underrecognized form of tumor progression, having distinct pathologic and imaging findings and potentially major management implications," the authors concluded. "The presence of persistent or growing centrilobular nodules on CT images should be considered suspicious for aerogenous spread in patients with primary lung adenocarcinoma, particularly those with invasive mucinous, papillary, and micropapillary subtypes."

Aerogenous metastases must be differentiated from multiple synchronous lesions in the spectrum of lung adenocarcinoma, they wrote. Appropriate diagnosis and treatment requires a multidisciplinary approach that includes radiologists, thoracic surgeons, pathologists, and geneticists. Genetic profiling can help provide proof of monoclonality in cases where aerogenous metastasis is suspected.

If you like this content, please share it with a colleague!
Related Reading
Chest CT referrals from x-ray yield high rate of abnormalities
Nearly half of patients who receive radiologist recommendations for chest CT to evaluate abnormal findings on chest radiography have clinically relevant...
Nonsolid lung nodules found on CT screening harbor few cancers
Nonsolid nodules detected with CT lung cancer screening are often indolent, and even when they do harbor cancer, the long lead times before such nodules... 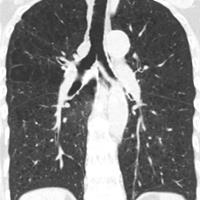 CT ties emphysema to mortality, independent of other risks
CT scans show that people with emphysema are at risk of earlier death than those without the disease, even if they have no evidence of chronic obstructive... 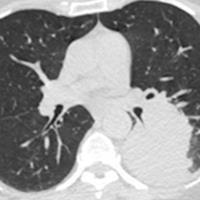