CT hits the road in Houston with stroke ambulance project

October 13, 2014 -- Houston doctors have launched a CT-equipped mobile stroke unit to start clot-busting treatment sooner after 911 is called. The University of Texas team also hopes to learn whether patients have better long-term outcomes when they're treated sooner rather than later.

There's little information in the literature on patients treated in less than 80 minutes after calling for help, according to Dr. James Grotta, a neurologist with Memorial Hermann Healthcare System and director of the city's first mobile stroke unit.

"What we don't really know is how much better patients will be if they're treated faster," he said. "Is it worth the effort?"

Grotta believes they'll do much better, but a study is needed to settle the issue, he told AuntMinnie.com.

The mobile stroke unit is the subject of a three-year prospective randomized study that began in August after a successful pilot study by the University of Texas Health Science Center and Houston Fire and Emergency Medical Services, which are coordinating the operation of the unit. The study will assess treatment times and long-term outcomes in ischemic stroke patients during weeks when the ambulance is in operation and compare them to outcomes in alternate weeks during which the ambulance is parked. 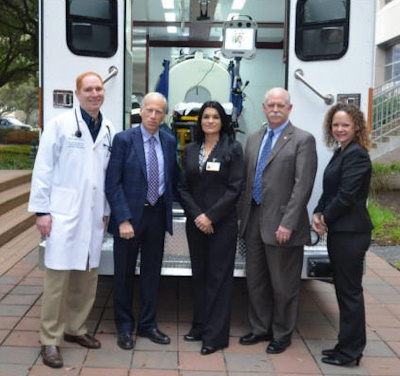 The Texas team's work was inspired by German researchers, who two years ago showed that the time to treatment decision after calling for help could be cut by more than half with the use of a similar mobile stroke unit, also equipped with experienced medical personnel and a conebeam CT scanner to distinguish ischemic from hemorrhagic stroke (Lancet Neurology, May 2012, Vol. 11:5, pp. 397-404). But questions about the experience remain unanswered, Grotta said.

"They measured treatment times and discharge status, but they didn't measure long-term clinical outcomes," he said. Equipped with the mobile stroke response unit, "patients were discharged more frequently, but that doesn't say what condition they were in. In the U.S. a lot of people go home who are totally devastated because they don't have insurance or anything else. So just going home doesn't necessarily mean a good outcome."

In addition to examining how well patients treated sooner do over time, the researchers will investigate whether a CT mobile stroke unit can be operated cost-effectively in the U.S.

As the saying goes, time is brain when it comes to stroke. Delayed treatment time for patients with symptoms of acute stroke means that only a small percentage receive tissue plasminogen activator (tPA), a clot-busting drug that can restore blood flow to critical brain regions and prevent significant neuronal loss.

Houston's mobile stroke unit is an ambulance equipped with all the diagnostic equipment and staff needed for prehospital stroke assessment and treatment.

The equipment includes a portable CT scanner (CereTom, NeuroLogica) to rule out bleeding in the brain before treatment is administered. Approximately one out of five strokes turns out to be hemorrhagic rather than ischemic. 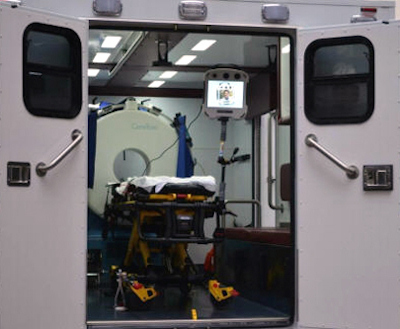 The mobile stroke unit is equipped with a conebeam CT scanner to rule out hemorrhagic stroke before administration of tPA.

A point-of-care laboratory system on board provides the tests necessary to determine the safety of tPA administration. Finally, a fast teleradiology/teleneurology connection is available to send and receive data to and from a teleradiology physician.

The project's catchment area will be a three-mile radius around the Texas Medical Center. When a 911 call indicates that a patient could be having a stroke, the mobile unit is dispatched, and EMS paramedics will directly solicit the patient history and perform a physical evaluation, followed by CT and tPA if necessary.

When symptoms suggest a stroke, a noncontrast brain CT will be performed by a certified radiology technician; the images will be reviewed by a vascular neurologist onsite or using PACS via telemedicine. If the patient meets inclusion and exclusion criteria for thrombolysis according to the latest published guidelines, tPA will be administered immediately and continue en route to the stroke center and after arrival.

The rolling acute stroke care center carries a vascular neurologist, a critical care nurse, a paramedic, and a radiologic technologist -- though the number of personnel is expected to be pared back depending on the results of another portion of the study, Grotta said.

"One of the other things we're trying to tell is whether a doctor or nurse on board can be replaced by remote telemedicine physician who can instruct an extra paramedic," he said.

In the mature mobile ambulance program, a city the size of Houston might have four or five vehicles deployed at a time, and a teleradiology physician would then direct treatment as indicated, according to Grotta.

The 300-patient trial -- half with the ambulance and half without -- is expected to last three years. The 150 patients receiving conventional acute stroke care will be rushed to one of three stroke centers. Every other week, ambulance patients will begin treatment before they arrive at one of the stroke centers.

The project is funded largely from "grateful" former stroke patients and philanthropists, Grotta said. A nonrandomized pilot study successfully treated 20 patients, and the randomized study began in August; it is currently treating about two patients per week with tPA, he said.

"We pick up about twice that number, but we only take on board the unit the patients we think are having a stroke in the time frame in which we can treat them," he said. "So far we've raised $1.5 million, and we think we can keep it on the road for a year and a half to do this study."

In addition to investigating the delay between the 911 call and treatment time, the researchers will document important information on the rate of administration of recanalizing treatments, safety, clinical outcomes, and cost-effectiveness.

"My hope is that we'll complete the study and learn what the costs are in comparison to the benefits," he said. "My hypothesis is that it will be cost-effective, and if so, then I see this as a paradigm shift in the way we treat stroke patients, in that every city will have cost-effective [mobile] stroke care." 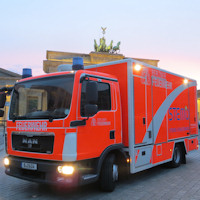 Ambulance with mobile CT cuts stroke treatment times
An ambulance equipped with a mobile CT scanner and thrombolysis equipment reduced treatment times for stroke patients without a corresponding increase...
Stroke victims not receiving timely imaging
"Time is brain" in stroke care -- and far too much of both are being lost, according to a neurologist-led study in Stroke that documents the delays...

Did anyone read the article about the CT on an ambulance for stroke program in Houston?  It seems there is no radiology involvement.

10/14/2014 9:26:33 AM
IGotKids2Feed
Well, sounds like the purpose of the mobile CT is only to look for blood. And it says either the neurologist or via PACS. With increasing data speed, rad can look at it just as quickly as the mobile neurologist.


Well, sounds like the purpose of the mobile CT is only to look for blood. And it says either the neurologist or via PACS. With increasing data speed, rad can look at it just as quickly as the mobile neurologist.

Exactly.  They could, but they aren't.

What is the average time to the nearest hospital once in an non-CT ambulance? 15 minutes?

How long on average do you have to wait for the CT-ambulance if there's only 1, or even if there's 4 to cover each quadrant of the city? To even be of benefit, the CT-ambulance can therefore be no slower than 23-24 minutes to the scene of a stroke, or the non-CT-ambulance (arriving in 7-8 min and getting to hospital in 15min) would be faster. This is, of course, assuming an equal amount of time for the EMTs to set up and scan the patient in the ambulance when compared to the time it takes to scan a patient on arrival to the hospital (which may definitely be significantly longer). Particularly in rush hour times, I think it would be difficult to have a CT-ambulance-to-stroke-patient time of 30 minutes or less in a large city like Houston unless there are a lot of CT-ambulances.

It seems like it would be better to concentrate more on having education on stroke symptoms/presentation and knowing the time of onset as well as on improving the speed of getting an ambulance patient into the hospital CT rather than on putting a CT in the ambulance.

Another wrinkle: the Texas project was based on a German pilot. My understanding is that often a physician rides in the ambulance to the scene in Germany. What happens when we allow EMTs to decide a patient is having a stroke and then giving TPA if the CT is clear? Is there no benefit to having an ER doc or neurologist make sure the patient is truly having a stroke before getting TPA?