January 17, 2014 -- In a study of coronary artery calcium (CAC) and heart disease, researchers found that greater plaque density appears to protect against cardiovascular events. The finding is at odds with existing assumptions about the implications of coronary calcium, according to an article in the Journal of the American Medical Association.

Based on the large Multi-Ethnic Study of Atherosclerosis (MESA) of more than 3,000 men and women, the new analysis from the University of California, San Diego School of Medicine found that MESA participants who did not experience adverse events over more than a seven-year follow-up period had denser calcified plaque than those who experienced cardiovascular events.

Patients with larger CAC volumes had more events related to coronary heart disease (CHD) and cardiovascular disease (CVD), while those with higher calcium density had fewer events, the study team wrote. They recommended further review to determine the predictive value of Agatston scoring.

"Current scoring systems assume that denser heart plaque is more hazardous, but we found the opposite," said lead author Dr. Michael Criqui in a statement accompanying the release of the study. "It's not good to have CAC, but it is less hazardous if it's more dense."

The study is not the first to suggest that denser calcified plaque may lead to fewer cardiovascular events, the group noted, but it is the first to compare the predictive power of scoring tests -- and, specifically, to find the Agatston score lacking. The semiautomatic Agatston scoring software calculates the product of the CAC plaque area within a CT slice and incorporates a plaque-specific density factor of 1, 2, 3, or 4.

Decades of research have confirmed the power of CAC tests for predicting cardiovascular disease. However, there has been little study of which specific measure of CAC is most predictive, or whether weighting a calcium score upward for increased density, as Agatston does, is appropriate for predicting risk, wrote Criqui and colleagues (JAMA, January 15, 2014, Vol. 311:3, pp. 271-278).

The assumption that greater density equals greater risk has been coming under more and more scrutiny.

Considering this evidence, the group aimed to determine the independent associations of CAC volume and CAC density with cardiovascular events, using patients from MESA.

The 3,398 participants were 45 to 84 years of age and free of cardiovascular disease, but they had calcium scores greater than 0 at baseline. For the current analysis, participants were followed for a mean of 7.6 years until October 2010.

The researchers used Spearman correlation coefficients to assess the degree of association between Agatston, volume, area, and density scores for plaque. Cox models were used to adjust for age, sex, and ethnicity, as well as for the general Framingham risk score, a measure that includes cholesterol, blood pressure, smoking, and diabetes status. Statin use was also accounted for. Criqui and colleagues assessed the incremental value of CAC density in predicting events by the increase in the area under the receiver operator characteristics curve (AUC).

There were 175 CHD events and an additional 90 CVD events during the follow-up period, for a total of 265 events.

With both CAC volume and CAC density scores incorporated into the same multivariable model, the study team found CAC volume to be independently associated with incident coronary heart disease, with a hazard ratio (HR) of 1.81 per standard deviation increase, and an absolute risk increase of 6.1 per 1,000 person-years. For cardiovascular disease, HR was 1.68, with an increase in absolute risk of 7.9 per 1,000 person-years, the group reported.

On the other hand, plaque density was inversely associated with heart disease. CAC density had an HR of 0.73 per standard deviation increase for coronary heart disease, with a decrease in absolute risk of 5.5 per 1,000 person-years. Similarly, for cardiovascular disease, HR was 0.71, with an absolute decrease in risk of 8.2 per 1,000 person-years.

There were only minor differences in predicting coronary heart disease and cardiovascular disease risk, owing to high correlation of the Agatston score with other coronary calcium scores, they wrote. "However, the data here suggest that the Agatston area or volume scores alone are not optimal measures to use in CVD risk prediction since the demonstrated inverse association with density also needs consideration," the authors noted.

Calcium measurements appear to be most useful in individuals at intermediate risk of events, in whom treatment decisions can be influenced by better risk predictions based on CAC, they wrote.

The findings are consistent with several previous studies that showed a modest correlation between CAC and coronary stenosis. Studies have also shown that patients with stable angina were more likely to have calcified plaque than patients with unstable angina, which carries a higher risk of heart attack.

Among the limitations of the analysis, the assessment of plaque density was crude and based on a four-point scale rather than a continuous Hounsfield unit scale, the group noted. Also, participants were told their CAC scores at baseline, which could have led to increased intervention.

Calcium scores rise and fall based on scanner vendor
CHICAGO - What's your coronary calcium score? The answer may well depend on who made your CT scanner, according to a Monday session at RSNA 2013. Dutch...

320-detector-row CT accurate for in-stent restenosis
CHICAGO - 320-detector-row CT diagnoses in-stent restenosis accurately, even in small stents, researchers from Japan reported in a Sunday session at the...
Cardiac imaging unsuitable for screening asymptomatic athletes
Despite technological advances in imaging in recent years, a new review has concluded that cardiac imaging cannot yet be recommended as a first-line screening... 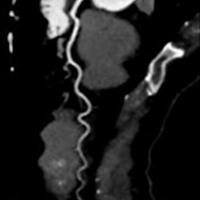