August 21, 2013 -- An advanced MR analysis method can reveal new information on blood vessel type function, enabling physicians to determine within days whether brain tumor patients are responding to antiangiogenesis therapy, according to a report published online August 18 in Nature Medicine.

After testing their method in a retrospective analysis on MR data acquired in a phase II trial of the antiangiogenesis drug cediranib in patients with recurrent glioblastoma, the researchers found that VAI was able to identify changes in the shape of blood vessels that reflected vascular normalization in the tumors after 28 days and sometimes as early as the next day after treatment.

"Using VAI, we found that antiangiogenic therapy led to a reduction in tumor vessel calibers and improved hemodynamic efficiency and oxygen saturation, and, more importantly, that subjects with these responses had prolonged survival," the authors wrote (Nature Medicine, August 18, 2013).

Currently, similar data on tumor blood vessels can be obtained only via biopsy, an invasive procedure, or a PET scan, which provides limited information and exposes patients to a dose of radiation, Emblem said in a statement.

With MRI, vessel caliber can be assessed by comparing the changes in observed proton relaxation from simultaneously acquired contrast-enhanced gradient-echo (GE) and spin-echo (SE) sequences. While cerebral vessel caliber can be assessed in practice by MRI using the quotient of gradient-echo and spin-echo blood volume or by direct assessment of the point-to-point difference in the contrast-agent relaxation rate curves, an apparent variation in the respective MRI signal readouts will occur depending on the hemodynamic properties of the tissue, according to the researchers.

"The outcome of this is a relative shift in the shapes and peak positions of the two relaxation rate curves," the authors wrote. "When visualized in a parametric plot, depending on tissue type, the pairwise gradient-echo and spin-echo data points may form a vortex curve of a certain shape and transverse in a clockwise or counterclockwise direction."

VAI analysis is derived from these vortex curves. Both the VAI method and the GE-SE echo-planar imaging (EPI) sequence were developed at MGH. The vessel-caliber MRI technique that formed the basis for VAI was also developed in part at MGH's Athinoula A. Martinos Center for Biomedical Imaging in the early 1990s, Emblem said.

In the retrospective analysis of data from the cediranib phase II trial, VAI showed that 10 of the 30 patients were true responders to cediranib, while 12 had a worsening of disease and were characterized as nonresponders to chemotherapy. The remaining eight patients had data that suggested stabilization of their tumors. 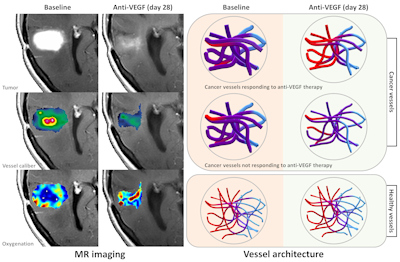 Click image to enlarge.
Left: VAI during antiangiogenic therapy in recurrent glioblastomas reveals new information on therapy response, including changes in vessel caliber, vessel type, and relative oxygenation in the tumor. Right: Patients who respond to antiangiogenic therapy by reduction of abnormal cancer vessel calibers, normalization of the artery-to-capillary-to-vein vessel branching hierarchy, and improved oxygen saturation levels were found to have prolonged survival compared to nonresponders. All images courtesy of Nature Medicine.

Patients who responded to chemotherapy survived six months longer than nonresponders, a significant difference for patients with an expected survival of less than two years, according to the researchers. Quickly identifying those whose tumors don't respond would allow discontinuation of the ineffective therapy and exploration of other options.

"Whereas traditional MRI of cancer in vivo is con­founded by haphazard and heterogeneous vessel architecture with limited or redundant perfusion, the VAI technique exploits these properties and provides further insights into the complex nature of tumor vascularity," the authors concluded.

Emblem noted that the VAI technique works with any type of MR scanner as long as the user has access to a GE-SE-EPI sequence for the perfusion MRI study. 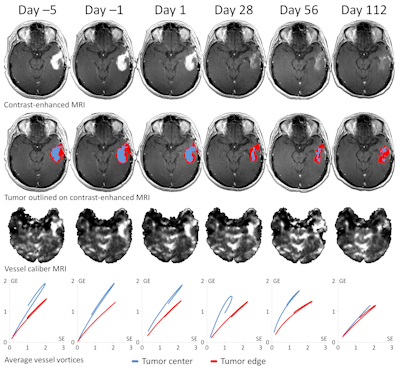 "This sequence is also used in traditional vessel caliber MRI," he told AuntMinnie.com. "We used MATLAB for VAI analysis and to make the resulting images shown in the paper. However, the user can make vessel vortex curves simply by deriving region-based standard relaxation rate curves from the GE and SE images, and combining these two curves in a scatter plot."

The VAI method is currently being explored in the clinic, both at MGH and at Oslo University Hospital in Norway, where lead author Emblem is also affiliated.

The researchers are also investigating the VAI technique in other forms of brain cancer and in cancers outside the brain, Emblem said.

"The latter may require some modifications in terms of the contrast agent type used and also the imaging sequence parameters," he said. "Furthermore, in the brain, we are currently exploring the use of VAI in stroke patients, where information on oxygen saturation levels in areas of risk is vital." 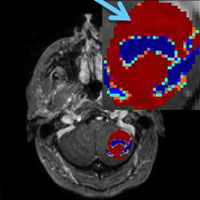 AAPM: MRI shows early brain tumor response to treatment
By using dynamic contrast-enhanced MRI and diffusion-weighted MRI, physicians can determine if a brain tumor is responding to treatment as soon as two... 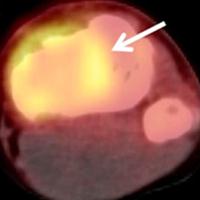 FDG-PET, DWI-MRI help predict osteosarcoma chemo response
Combining FDG-PET/CT and diffusion-weighed MRI (DWI-MRI) may be useful for predicting the histologic response of osteosarcoma to neoadjuvant chemotherapy,...
Imaging biomarkers show promise for cancer treatment response
Imaging biomarkers show promise as tools to assess patient response to chemotherapy and radiation therapy. Research on the use of biomarkers for brain...
RT of the brain effective with smaller margins
Patients who undergo radiation therapy (RT) for glioblastoma experience the same patterns of failure regardless of whether smaller or larger radiation...