April 3, 2013 -- For more than 30 years, women with breast implants have said they feel strange sensations when flying at high altitudes in commercial airplanes -- sensations that can persist even after landing. Long considered a myth, a radiologist explained the cause in a letter published in the March issue of Plastic and Reconstructive Surgery.

The culprit is peri-implant gas, and women with augmented or reconstructed breasts have been experiencing a phenomenon similar to decompression sickness, aka the bends. Dr. John M. Lewin, a mammographer in the breast imaging section of Diversified Radiology of Colorado in Lakewood, resolved the mystery based on chest CT of a woman who had undergone breast reconstruction following a bilateral mastectomy.

After receiving a negative breast ultrasound, the patient also underwent a chest CT exam at a local hospital to investigate mild shortness of breath. Findings were negative except for a small amount of gas that could be seen surrounding the breast implants within the implant capsule. The woman had flown the day before from New York to Denver, also known as the Mile High City for its altitude. From Denver, she drove over a mountain pass with an elevation of 10,600 ft to her home in a town with an elevation of 8,000 ft above sea level (Plast Reconstr Surg, March 2013, Vol.131:3, pp. 465e-467e).

Decompression had caused dissolved gas in the blood to come out of solution and fill a potential space between the implant and the capsule, Lewin explained. Because the compressibility of tissue is much greater than that of silicone gel or saline, the surrounding tissue expanded to a much greater degree than the implant. This created an empty space between the capsule and the implant, and dissolved gas from the blood came out of solution to fill the vacuum. 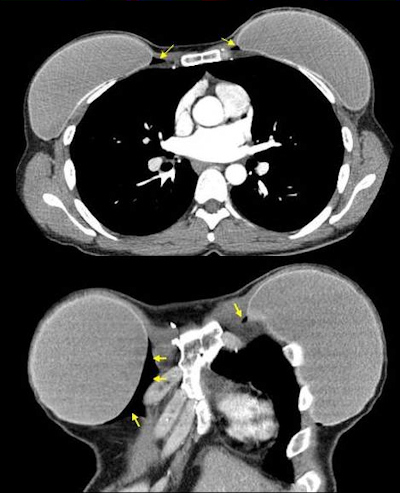 The sensation reported by women hadn't previously been identified because the gas is gradually reabsorbed after pressure is restored when a plane lands. Because the patient landed in Denver and immediately traveled to an even higher elevation, pressurization did not occur as rapidly. The woman remained relatively depressurized.

Lewin had seen a similar phenomenon on a screening mammogram acquired in Denver of a flight attendant a number of years earlier. Although he could not confirm it, presumably this woman had the mammogram shortly after a flight she was on had landed. The woman had augmented breasts, but none of her other screening mammograms had ever shown gas.

The finding debunks the myth that implants expand enough to explode on airplanes, which was even tested on the Discovery Channel television show "MythBusters," Lewin noted. In episodes aired October 3, 2003, and June 8, 2004, the hosts of MythBusters placed a silicone implant in a hypobaric chamber set to simulate an altitude of 35,000 ft -- there was minimal expansion and no explosion.

Lewin's discovery should set to rest such concerns for women who've undergone breast implants or reconstruction.

Politics blocks widespread use of breast MRI for implants
VIENNA - In the region served by the Ribera public hospital, around 10,000 women have received defective Poly Implant Prothese (PIP) implants, a population...
FDA: Breast implants reasonably safe, but still get checkups
Breast implants filled with silicone gel have a "reasonable assurance" of safety and effectiveness when used as labeled, but women still should have routine...
Copyright © 2013 AuntMinnie.com