November 12, 2020 -- As radiology's oldest modality, classic radiography sometimes gets overlooked in favor of more glamorous technologies such as CT, MRI, and PET. But the COVID-19 pandemic has demonstrated that digital x-ray still has some new tricks.

Healthcare providers on the front lines of COVID-19 have found digital x-ray to be a crucial tool in the diagnosis and management of patients. Much of that utility is due to radiography's flexibility and cost-effectiveness, with mobile x-ray systems able to be taken directly to the point of care and digital images distributed wirelessly to PACS.

There are major advantages to this approach, as potentially infectious patients don't need to be transported through hospital hallways, and mobile-x-ray equipment is much easier to disinfect than CT scanners, for example.

Radiology staff has also gotten creative during the pandemic by developing novel ways to perform radiography while keeping staff safe, such as shooting x-rays through glass partitions that separate patients from radiologic technologists. Try doing that with a CT scanner.

Radiography's move to digital operation has also opened up a host of exciting opportunities for advanced image reconstruction and analysis, such as with artificial intelligence (AI). Many AI algorithms designed for detecting pneumonia are being retooled rapidly for use in COVID-19.

At RSNA 2020, many of the themes below will be in evidence. In particular, keep an eye out for new AI algorithms (for a sneak peek at what's going on in AI, check out our Road to RSNA AI preview).

The first in line

When reports began surfacing in early 2020 of a mysterious flu-like virus circulating in Wuhan, China, x-ray and CT were the first modalities in line to provide insight into the clinical manifestations of the condition that would later become known as COVID-19.

Two early cases illustrate the role x-ray played as the SARS-CoV-2 virus began spreading globally. In the first, a man from Washington state presented to an urgent care clinic on January 19 with a four-day history of cough and fever that had begun after he visited family in Wuhan. Radiographs that were initially acquired showed no abnormalities, but on his fifth day of hospitalization, x-rays showed evidence of pneumonia in the lower lobe of the left lung, and images at 10 days demonstrated basilar streaky opacities in both lungs, consistent with atypical pneumonia.

Chest x-ray of one of the first COVID-19 patients in China. Image courtesy of the New England Journal of Medicine. © 2020.

In another early case, a Vietnamese man who had traveled to Wuhan presented to a hospital upon returning home on January 22 with low-grade fever and fatigue; his chest radiographs demonstrated progressive infiltrate and consolidation in the upper lobe of the left lung.

But these wins for x-ray were soon eclipsed by studies indicating that radiography also had a high miss rate for pulmonary nodules that were related to COVID-19 and were later discovered by CT. For example, a Korean study published at the end of March found that x-ray's sensitivity for lung opacities was only 25%. But that same study also found that radiography had a specificity of 90%.

Another study in early 2020 quantified the type of chest x-ray findings common in COVID-19 patients, with the top abnormality being bilateral rectilinear nodular opacities, found in over 52% of patients, with ground-glass opacities in over 47%. Other less common findings included pleural effusion, peribronchial thickening, and focal consolidation.

As the pandemic wore on, radiologists began to focus on the role in diagnosis and workup of COVID-19 for which radiography was best suited. Clinicians from Mount Sinai Hospital in New York City -- the site of one of the worst outbreaks early in the pandemic -- found that portable chest x-rays were most useful for predicting the prognosis of patients with known or suspected COVID-19, such as whether they would need to be hospitalized or intubated. In fact, they found that a single frontal-view chest x-ray was suitable for this purpose.

As radiologists learned to find the telltale signs of COVID-19 in x-ray images, radiologic technologists and administrators learned to adapt to the new reality of operating during a pandemic. To minimize the risk of infection, x-ray machines were sited on the other side of glass partitions erected inside the department or even in doorways for patients waiting in makeshift outdoor exam rooms. 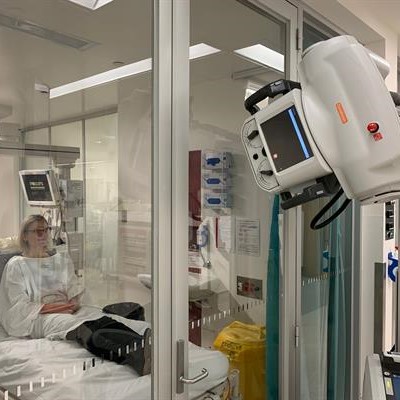 Radiology departments have gotten creative in how they use x-ray during COVID-19. Image courtesy of the Australasian College of Physical Scientists and Engineers in Medicine.

This approach was validated by a paper published on May 31 in Radiography describing how U.K. researchers measured the radiation dose and image quality of radiography images acquired through glass barriers. They found that there was no statistically significant difference in radiation dose with the method, nor was there any difference in image quality as perceived by an expert radiologist.

What's more, they found that imaging through the barrier resulted in a major improvement in workflow and productivity. They performed a time-motion study of radiographers working without a barrier and discovered that while acquiring the x-ray alone took six minutes, cleaning the mobile x-ray system, disinfecting the mobile detector stand, and putting on and removing personal protective equipment (PPE) added another 20 minutes -- an amount of time they found "astonishing."

Portable x-ray's utility during the COVID-19 pandemic has been borne out by the fact that the modality experienced the lowest drop in utilization among all imaging technologies during the period of "pandemic paralysis" immediately after the outbreak hit the shores of the U.S. and Europe in March.

A survey released in April by market research firm IMV Medical Information Division, a sister company of AuntMinnie.com, found that procedure volume for portable x-ray fell only 6.8%, compared with a 37.5% decline for CT, a 38.6% drop for fixed general x-ray systems, a 42.7% decline for ultrasound scanners, and a whopping 70.4% drop for mammography systems.

What does the future hold?

As RSNA 2020 approaches, researchers are beginning to look for ways to make digital x-ray even more useful for diagnosing and managing COVID-19 cases. One of the most obvious tools for this is artificial intelligence.

Fortunately, developers of AI algorithms have had a lot of practice with chest radiography images, thanks to the number of large databases that have been released in the past few years on which to develop and train algorithms. This has led to an explosion of AI offerings in development for COVID-19.

As the pandemic spread, AI developers quickly adapted algorithms designed to detect pneumonia and retooled them to recognize signs of COVID-19. One of the first was described by researchers from the University of California, San Diego, who showed in a March 20 paper that their algorithm was able to predict and localize COVID-related pneumonia in a small group of patients.

The open-source nature of AI development -- with developers working with common bits of computer code -- helped accelerate the rollout of new AI algorithms. A Canadian group was able to develop an algorithm called COVID-Net using two open-source datasets with nearly 6,000 chest x-rays. While they acknowledged that the algorithm did have some drawbacks, they posted the source code to the internet so others could pick up on their work.

And true enough, as 2020 wore on it appeared that the AI models were only getting better. A major help was the fact that developers soon were able to use actual COVID-19 cases for development and training, rather than repurposed pneumonia cases.

In September, researchers from Wisconsin unveiled their work on an AI algorithm developed specifically to address x-ray's shortcomings for COVID-19. They felt that part of the problem could be that many radiologists were seeing the disease for the first time, so they built a deep neural network called CV19-Net that generated heatmaps of possible SARS-CoV-2-related infection in the lungs. Its performance was comparable to or better than that of radiologists, they found. 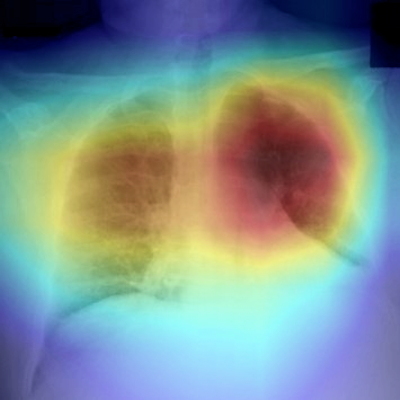 Image shows heatmap generated by CV19-Net overlaid on original image. Red area highlights regions that contribute most to the CV19-Net prediction. Image courtesy of the RSNA

In fact, one study in review at the Journal of Medical Internet Research indicates that the COVID-19 pandemic could be accelerating faster adoption of digital technologies such as AI. The speed of this adoption will definitely be one topic of discussion at RSNA 2020.

While this year's virtual conference will be a sharp departure from meetings of the past, one constant will be the relentless pace of technological and research innovation -- one that is transforming radiology's oldest modality.