An image-guided interventional radiology (IR) treatment using pulsed radiofrequency was able to relieve pain symptoms in a majority of patients with low back pain and sciatica, according to a presentation by Italian researchers on November 29 at this week's RSNA 2017 meeting in Chicago.

Low back pain affects at least 80% of the population at some point during their lives, according to RSNA press materials. Job-related disability is a frequent source of the condition, which affects men and women equally, and the pain can become chronic: 20% of people who experience low back pain have symptoms lasting a year or more.

Low back pain is frequently caused by a compressed and herniated disk in the back, in which the cushion between the vertebrae impinges on and damages nearby nerves. Such pain often radiates to the legs, and a vicious cycle can occur when the body reacts to pain by contracting muscles; this decreases the distance between the vertebrae and exacerbates the condition, according to Dr. Alessandro Napoli, PhD, from Sapienza University in Rome. Napoli presented the results at RSNA. 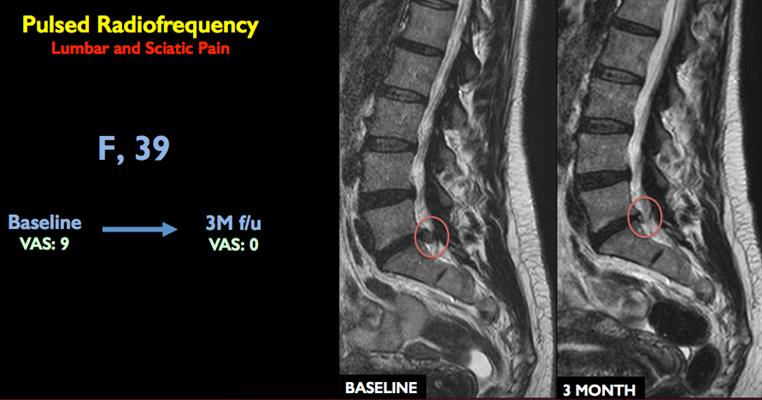 Napoli and colleagues conducted a prospective study that included 80 patients who had been experiencing back pain for at least three months due to a herniated disk that did not respond to more conservative therapy, such as exercise and medication.

Under CT guidance, interventional radiologists inserted a needle at the location of the bulging disk and nerve root. The clinicians then inserted a probe through the tip of the needle that delivered pulsed radiofrequency (RF) energy to the problem area over a 10-minute period. The RF energy resolves the herniation without touching the disk, Napoli reported.

Of the 80 patients who received a single 10-minute treatment, 81% reported they were pain-free after a year. Six patients needed a second pulsed RF session, and 90% of the patients were able to avoid open surgery.

As the pain dissipates, muscles relax and the distance between the vertebrae returns, Napoli said. What's more, there were no side effects to the treatment.

Napoli believes this image-guided treatment could occupy a niche between conservative therapies and surgical repair for patients with disk compression and herniation.

Imaging shows how yoga injuries affect tendons, cartilage
Yoga, that poetic and wildly popular integration of human body, breath, and mind that has swept the U.S. in recent years, does cause musculoskeletal problems,...