The presenter, Dr. Yasir Bahadur, chairman of the radiology department at King Abdulaziz University, told AuntMinnie.com that Saudi Arabia is the first Arabic country to offer this treatment.

After they saw the success of the technique in many Western countries, they decided to conduct this research in their country, he said. Breast cancer is the most common cancer in Saudi Arabia, with more than 1,500 new patients diagnosed every year.

He reported that IORT for early-stage breast cancer patients using the Intrabeam low-kV x-ray generator (Carl Zeiss Meditec) was easily implemented in their center and also had an acceptable toxicity profile.

"After we started this treatment, patients liked it so much that recently three other cancer centers in Saudi Arabia have adopted this technique," he said.

He explained that radiotherapy units are available in very few cities in Saudi Arabia, and patients have to travel to these locations and stay for six weeks to receive treatment, which is very inconvenient for them.

The Intrabeam system delivers a large dose of radiation to the tumor bed during surgery immediately after excision of the tumor mass, which can save the patient from having to make daily trips to the radiotherapy unit for the six weeks.

"This technology will be very convenient for patients as they wake up from their operation and their cancer is excised and radiotherapy is completed," he said.

Bahadur and colleagues conducted a prospective phase II study of IORT from December 2010 to November 2012 at King Abdulaziz University Hospital.

The study included 45 female patients between the ages of 27 and 79; the majority were older than 45. All of the patients were eligible for breast-conserving surgery, with a biopsy proving invasive ductal carcinoma and a clinical mass of 3.5 cm or less.

The patients underwent wide local excision and sentinel lymph-node dissection, and an axillary clearance was performed if the sentinel node was positive.

An appropriately sized applicator was surgically positioned in the excision cavity, and IORT using the Intrabeam system was delivered to the tumor bed immediately after surgical excision with a single dose of 20 Gy prescribed to the applicator surface.

Patients with a tumor size of more than 3 cm, lymphovascular invasion, multifocal lesions with an area of more than 3 cm, extensive ductal carcinoma in situ (DCIS), or lymph-node metastasis also received external-beam radiotherapy after IORT. 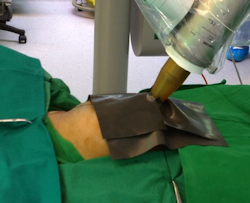 Most of the patients (36) had tumors smaller than 3 cm in diameter. The majority had pathologically negative axillary lymph-node metastases (30 cases). The median size of the applicators used was 4 cm (range, 3-5 cm).

The median follow-up period was 18 months, and during this time, none of the patients developed local or distant relapse. Also, following the operation, there were no instances of delayed wound healing or postoperative infection.

While most of the patients (29) received IORT, only 16 also received external-beam radiotherapy after IORT. Twelve patients developed fat necrosis proved by radiological findings (mammography and/or MRI).

"Unfortunately, we found that many of our patients had more-advanced disease, where the cancer had already spread to lymph nodes, and this technology is ideal for early-stage cancer," Bahadur said. "So, many patients who would have liked to be treated with this technology could not be, because they had more advanced disease which required postoperative radiotherapy."

For the patients who received the IORT treatment, it was safe and effective and not prohibitive in terms of cost or side effects.

"Cancer patients are treated for free in Saudi Arabia; however, in other countries, it is much cheaper to take this single treatment during the operation as compared with conventional postoperative daily treatment for six weeks," he said.

Also, it has fewer side effects because only part of the breast (tumor bed) is being treated, compared with conventional whole-breast radiotherapy.

While Bahadur and colleagues found the technique to be safe, easy to adapt, and convenient for patients, it's important to identify early-stage patients for treatment, he concluded.


Wish you all the best