CHICAGO - Study findings on the benefits of digital breast tomosynthesis (DBT) and how tissue density affects a woman's breast cancer risk as she ages were highlighted on Tuesday at the RSNA meeting.

Researchers from the University of Pennsylvania found that DBT reduced recall rates and increased cancer detection in a large breast cancer screening program. In addition, a group of clinicians based in London reported that the rate at which breast density changes in some women as they age may affect their breast cancer risk.

The benefits of tomosynthesis

Since October 2011, every patient screened for breast cancer at the Hospital of the University of Pennsylvania has been screened with breast tomosynthesis, regardless of their breast cancer risk or tissue density, said lead study author Dr. Emily Conant.

Dr. Emily Conant from the University of Pennsylvania.

"Everyone received DBT -- there was no other type of screening going on," she said at a press conference.

Conant and colleagues compared imaging results from 15,633 women who had DBT at the hospital beginning in 2011 to those of 10,753 patients imaged with digital mammography the prior year. Six radiologists trained in digital breast tomosynthesis interpretation reviewed the images.

The study showed that the average recall rate for DBT was 8%, compared with 10% for digital mammography, according to Conant. The technology also increased the overall cancer detection rate, from mammography's 3.51 per 1,000 patients to 5.24 per 1,000 patients, and demonstrated a 30% increase in the detection of invasive cancers.

"Tomosynthesis is still evolving, and it's not the solution to everything, but the technology is an exciting improvement on what we use routinely," she said.

Dr. Nicholas Perry, from the London Breast Institute, and colleagues compared breast density and cancer risk between younger and older women and analyzed how the risk relates to changes in breast density over time. Breast density on mammography is considered to be a strong and independent risk factor for breast cancer, Perry said.

"Assessing density is important, but we're not very good at it -- in fact, different radiologists may have only 60% agreement when classifying the two middle density grades," he said. "Using the automated system gave us an absolute measurement."

Breast cancer patients showed higher mammographic density than healthy participants up to the age of 50. The healthy controls demonstrated a decline in density with age that followed a linear pattern, while there was considerably more variability in density regression among the breast cancer patients, according to the researchers.

The results suggest that perhaps women could undergo an early mammogram to establish density, which would then lead to enhanced screening for those with the densest breasts, Perry said. For example, some women might undergo a modified exposure exam at age 35 to establish breast density levels, and those with denser breast tissue could then be followed more closely with mammography and additional imaging such as MRI or ultrasound for earlier cancer detection and treatment.

"Every year, 47,000 women under 50 are diagnosed with breast cancer," he said. "We need to develop tailored screening programs that consider a woman's personal risk."

Breast density advocate Cappello tells her story in JACR
The driving force behind the breast density notification movement -- Nancy Cappello, PhD -- tells her side of the story in the December issue of the Journal...
Breast density may play key role in tumor aggressiveness
High breast density may play an important role in tumor aggressiveness, especially in younger women, according to study results published online in Breast...
Tomosynthesis reduces mammo screening recall rate by 30%
When added to mammography, digital breast tomosynthesis reduces overall recall rates in breast cancer screening by 30%, with even greater reductions for... 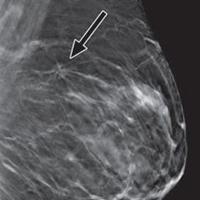