The researchers compared fractional anisotropy (FA) values in 10 war veterans diagnosed with MTBI with FA values in 10 healthy controls. FA measures the uniformity of water diffusion throughout the brain, with low FA tending to indicate areas of injury. The average time between the blast-induced injury and DTI-MRI among the patients was 51.3 months.

DTI-MRI showed significant differences between the two groups, with significant correlations between FA values and attention, delayed memory, and psychomotor test scores, according to co-author Thomas Malone, a research associate at Saint Louis University School of Medicine, and colleagues.

Because the victims were, on average, more than four years removed from their injuries, the results suggest the presence of a long-term impact of blast injury on the brain, the group concluded.

That impact could account for ongoing cognitive and behavioral symptoms in some veterans with a history of blast-related MTBI. The results also indicate that DTI-MRI is sensitive to group differences in blast-related MTBI, even in the postacute phase, Malone and colleagues noted. 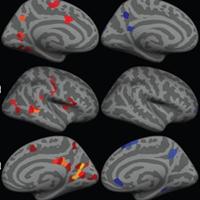