CHICAGO - A large Japanese lung cancer screening study found that few solid ground-glass nodules (SGGN) 5 mm and smaller grow to become invasive adenocarcinomas -- even when followed for five years or longer, according to a Tuesday presentation at RSNA 2013.

Researchers from the National Cancer Center Hospital in Tokyo followed more than 7,000 individuals screened for lung cancer for more than five years, including 438 people with SGGNs 5 mm or smaller at low-dose CT lung cancer screening. Over the study period, just 1% developed invasive adenocarcinomas, though 10% grew from their baseline diameter, providing some assurance that screening could easily be repeated -- and probably should be repeated -- in time to avoid the development of invasive cancer.

"Patients with solid ground-glass nodules smaller than 5 mm should be rescanned within no less than six years," concluded Dr. Ryutaro Kakinuma, PhD.

Fleischner Society guidelines state there is no need to follow up ground-glass nodules smaller than 5 mm, but uncertainty remains regarding exactly how many of these nodules can be expected to grow and become invasive tumors -- and, indeed, how fast they grow, he said.

Because there is little evidence to support the recommendation of not following up such lesions, the study aimed to examine the percentage of nodules that grew to become invasive adenocarcinomas in long-term follow-up.

The study included 7,294 participants who underwent CT lung cancer screening between February 2004 and December 2007. Solid ground-glass nodules were detected at baseline screening and at follow-up for five years or more as of March 2013. One incident SGGN developed into lung cancer and was removed during the follow-up period, Kakinuma said.

Growth of an SGGN was defined as an increase of 2 mm or more in the maximal diameter.

Among 961 screening subjects with SGGNs 5 mm or smaller, 438 were followed for more than five years (mean, 5.7 years). Over the follow-up period, 104 SGGNs disappeared, seven shrank appreciably, and 107 were lost to follow-up.

"Only 10% of SGGN 5 mm or smaller grew in size, with less than 1% of SGGN developing into minimally invasive or invasive adenocarcinomas," Kakinuma said, so these nodules should be rescanned in no fewer than six years.

A session moderator added that in discussions preceding publication of the Fleischner Society guidelines "this was one of the first issues they raised. The conclusion was that there was hardly any evidence to support the recommendation of no follow-up of nodules under 5 mm -- so this is really the data we need to readdress that if 10% of them are going to grow," she said. 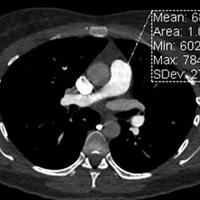 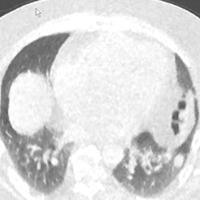 MDCT: Ultralow-dose CT lung scan needs more validation
WASHINGTON, DC - Ultralow-dose lung CT with iterative reconstruction looks to be quite robust, but more validation is needed before imaging facilities...
Raising threshold for positive lung cancer screen cuts workups
How big should a lung nodule be before it can be considered worthy of diagnostic workup? It's not just an academic question, as it plays into the growing...
Radiologists may not always comply with Fleischner guidelines
CHICAGO - The vast majority of radiologists appear to understand the Fleischner Society's guidelines on management of small pulmonary nodules incidentally...
Copyright © 2013 AuntMinnie.com