December 12, 2012 -- While utilization of high-tech imaging modalities soared and then slipped over the past decade, use of the humble chest x-ray has continued at a relatively stable rate, researchers found in a study presented at the RSNA 2012 conference.  Discuss
Adopting EMRs improves tracking of extravasation episodes
December 10, 2012 -- Adopting electronic medical records (EMRs) can help facilities improve their reporting of extravasation incidents that occur during contrast CT studies, researchers reported at the recent RSNA 2012 annual meeting.  Discuss
Imaging IT offers bright spot in gloomy imaging industry
December 7, 2012 -- Exciting developments are under way in the imaging IT sector, which is benefiting from overall momentum in health IT. The segment has promising growth potential despite an overall slowdown in the medical imaging industry, according to analysis from market research firm Frost & Sullivan.  Discuss
Mary's Musings: Head in the clouds at RSNA 2012

December 6, 2012 -- Not very long ago, it seems, I went to my first RSNA meeting. I was really impressed -- and I still am! Each year at RSNA, one gets a chance to peek ahead into the future: and ours is data. Data will allow us to step out of our black box of radiology and into our roles as physicians again.  Discuss
Increased CT use may boost breast cancer risk
December 5, 2012 -- Increased use of CT may boost breast cancer risk in certain women, such as younger patients and those who receive repeat exams, according to research presented at the RSNA 2012 meeting. Nuclear medicine exams may also raise the risk of breast cancer.  Discuss
USPSTF guidelines sparked decrease in screening mammo rates
December 4, 2012 -- Screening mammography guidelines issued by the U.S. Preventive Services Task Force (USPSTF) in 2009 led to a decline in breast screening, which, in the future, may lead to missed cancers, according to research presented last week at the RSNA 2012 meeting.  Discuss
Yearly screening breast US benefits women with dense tissue

December 4, 2012 -- Although the optimal frequency of screening breast ultrasound for women with mammographically dense breast tissue remains under debate, study data presented at last week's RSNA 2012 meeting suggest that this population would benefit from yearly scans.  Discuss
C-11 methionine PET aids diagnosis of adenomas, multiple myeloma
December 3, 2012 -- The radiotracer carbon-11 (C-11) methionine (MET) with PET/CT can help clarify negative or inconclusive FDG-PET findings in multiple myeloma patients, as well as differentiate between atypical and typical pituitary adenomas, according to two Japanese studies presented at last week's RSNA 2012 conference.  Discuss
Study: Hold the contrast for CT of asymptomatic hematuria
December 3, 2012 -- In young patients undergoing urograms after a finding of asymptomatic hematuria, it may not be necessary to perform contrast-enhanced CT, as a noncontrast scan may be sufficient, researchers suggested at last week's RSNA meeting.  Discuss
123456next »

Healthcare Informatics (with SR) Preview
November 16, 2012 -- Once again, this is a year focused on healthcare IT and imaging informatics at the 2012 RSNA conference. It would be an understatement to say that there are a staggering number of courses, scientific sessions, educational exhibits, and poster presentations -- even the subject of the Eugene P. Pendergrass New Horizons Lectures has an informatics slant.
MRI Preview
November 15, 2012 -- At this year's RSNA conference, look for MRI to garner increasing attention as a viable modality in clinical applications where radiation exposure is a concern. In addition, radiologists are using MRI to discover previously hidden secrets in the brain for afflictions such as Alzheimer's disease, cognitive disorders, multiple sclerosis, and stroke.
Women's Imaging Preview
November 14, 2012 -- Hot topics in women's imaging at this year's RSNA meeting include breast ultrasound and digital breast tomosynthesis (DBT), and attendees can expect to encounter everything from refresher courses to scientific sessions devoted to these technologies. But don't be surprised to hear a lot about breast MRI as well.
Digital X-Ray Preview
November 13, 2012 -- This year's presentations on digital x-ray at RSNA 2012 illustrate the rapid advances being made in this modality. Radiography's conversion to digital is making possible the use of advanced image-processing tools once reserved for more advanced modalities, raising the possibility of better patient care at lower radiation doses.
Advanced Visualization Preview
November 12, 2012 -- The growing power of advanced visualization technology will be ever-present in the scientific program at this month's RSNA meeting in Chicago. Hot topics this year include computer-aided detection (CAD) and computer-aided diagnosis (CADx) technology, as well as quantitative imaging. Look for a range of papers on CAD and, in particular, CADx, as researchers increasingly explore the use of computer-aided technology to assist in diagnosis, not just detection.
Molecular Imaging Preview
November 8, 2012 -- For molecular imaging, PET/MRI undoubtedly will garner considerable attention at the 2012 RSNA meeting in Chicago, as the hybrid modality gains interest with each new study that exalts its clinical potential. Preview the noteworthy molecular imaging and nuclear medicine scientific papers that will cover a wide range of clinical applications which will evaluate and benefit patient outcomes.
Ultrasound Preview
November 7, 2012 -- Could ultrasound be the primary screening test for breast cancer? Is the public served by the increasing use of handheld ultrasound? These questions and many more will be addressed at the upcoming RSNA meeting in Chicago
CT Preview
November 6, 2012 -- RSNA 2012 caps an extraordinary year for CT fans who like their technology high and their radiation doses low. The CT-focused scientific sessions at this year's show explore a broad array of CT topics that are driven, more than anything, by the need to get more image information with less radiation.
PACS Preview
November 5, 2012 -- A variety of PACS educational opportunities await RSNA attendees this year, including research on mobile devices, image sharing, teleradiology, compression, quality assurance, disaster recovery, cloud computing, and more.
RSNA 2012
Photo Gallery 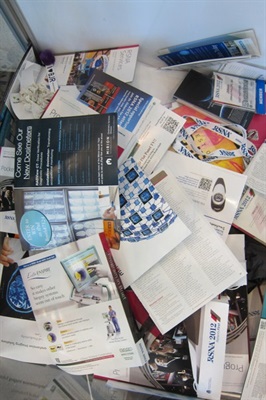