VIENNA - Researchers from the Medical University of Vienna have received a prestigious award for their ECR 2019 e-poster presentation about how to simplify the differential diagnosis of diffuse ground-glass opacifications (GGOs) using CT.

"Diffuse GGO is a commonly encountered pattern in CT scans of the lung and can prove to be a very time-consuming finding, as there are many possible differential diagnoses. Following a step-by-step approach can help to narrow down the differentials," noted lead author Dr. Sebastian Röhrich and colleagues Drs. Florian Prayer and Helmut Prosch.

Three essential questions can guide the differential diagnosis of diffuse GGO: Is it a pathology? Is the GGO acute or chronic? What is the patient's medical history? Once these questions have been addressed, it is important to review the imaging findings about the spatial and temporal distribution of GGO, in addition to the ancillary imaging findings, according to Röhrich and colleagues. 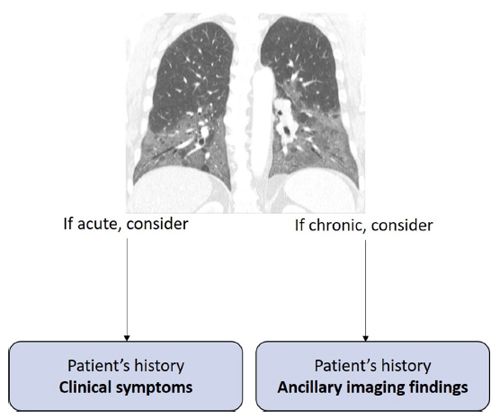 The diagnostic approach should be adjusted to whether GGO is acute (less than a few weeks) or chronic (more than six weeks). All images courtesy of Dr. Sebastian Röhrich et al.

One of the most common findings simulating GGO is insufficient inspiration depth and dependent atelectasis, they noted. "A look at the posterior membranous tracheal wall can help to make sure that the patient has inhaled sufficiently. The typical distribution of dependent atelectasis in the posterior parts and adjacent to vertebral bodies further helps to distinguish them from GGO," the group wrote.

A second scan in deep inspiration or a prone position can help ventilate previously less aerated lung regions, the authors continued. Another pitfall is the misclassification of normal lung tissue as GGO in mosaic perfusion or next to air trapping, and, in this situation, it is mandatory to perform scans during both inspiration and expiration.