VIENNA - A computer-aided detection (CAD) scheme outperformed experienced human readers in detecting subsolid nodules as well as cancers in data from more than 2,000 lung cancer screening subjects, researchers reported on Thursday at ECR 2017. At the same time, CAD agreement with human readers was only fair, suggesting that both reading methods will continue to have a role in screening.

"CAD detected a large number of relatively small subsolid nodules that were overlooked by visual detection," said lead author Dr. Mario Silva, a radiologist and doctoral candidate at the University of Parma in Italy. "In particular, part-solid nodules were detected more frequently by CAD compared to visual detection."

The challenge of subsolid nodules 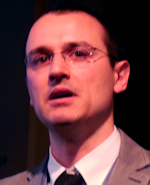 Dr. Mario Silva from the University of Parma.

Although CAD studies of the hard-to-see subsolid nodules have shown promising results, "there is no article testing the CAD system as a concurrent reader in a full database of CTs," Silva said. "So the aim of the study was to test the CAD system in a whole MDCT dataset for a lung cancer screening trial, and then to compare manual parameters to semiautomated parameters to evaluate the differences that might come from one or the other measurement."

The researchers studied participants in the Multicenter Italian Lung Detection (MILD) trial, in which 2,303 subjects underwent baseline low-dose CT screening; all were 50 years or older and had a minimum 20 pack-years of smoking history. All studies were visually reviewed for the detection of subsolid nodules, Silva said.

"We evaluated the potential differences between nodules that were detected just by CAD or just by visual detection, maybe to implement some more features into the CAD system to help detect the lost nodules, and also we finally compared the semiautomatic and visual metrics to see how the semiautomatic measures would perform based on international guidelines," Silva said.

Persistent subsolid nodules were detected by CAD after baseline in almost 50% of cases (11/23), Silva said.

"It is also noteworthy that all [eight] subsolid nodules growing into a tumor were detected by CAD," he said.

"In conclusion, CAD detected a large number of relatively small subsolid nodules in subjects that were overlooked by visual detection," Silva said. CAD revealed exceptionally higher sensitivity for part-solid nodules in particular. Some nodules were not detected by CAD in the initial screening round, but if they were persistent, they were detected at subsequent CT screening rounds.

With regard to international guidelines that are based on manual measurement of nodules, Silva urged caution. 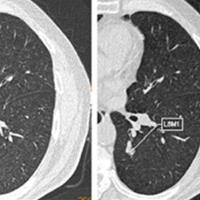 CAD finds most lung cancers undetected on CT
Computer-aided detection (CAD) finds most cancers that were missed in CT lung cancer screening, according to a new study in Radiology. CAD can... 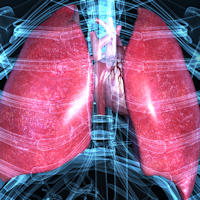