Dr. Paul Parizel, PhD, is the first radiologist to preside over both the European Society of Radiology (ESR) and ECR at the same time, but what do we know about the man behind the presidential mask? What really makes him tick, what does he do from day to day, and what are his views on the future of radiology? How does he relax and unwind? Here are 10 things you probably don't know about him. 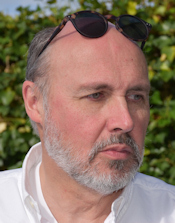 Since 2003, Parizel has been chairman of the radiology department at the Antwerp University Hospital (UZA) and a full professor in the Faculty of Medicine and Health Sciences at the University of Antwerp (UA). His team comprises 16 board-certified staff members, seven board-certified consultants, and 72 radiographers and nurses. They see about 350 patients per day and perform more than 450 procedures per day, or approximately 160,000 procedures per year, including 25,000 CT, 20,000 MRI, 6,000 ultrasound, and 5,000 mammography examinations. The department also has 11 administrative staff members and seven patient transportation staff.

2. "Lead by example" and "Meet patients" are his two core philosophies

"It's probably very old-fashioned now, but leading by example is the approach I try to follow, and I think it really works," Parizel said. "Almost 20 years ago, I enrolled in a micro Master of Business Administration program for hospital physicians, and this was one of the main things I learned during my studies."

Also, he urges radiologists to see more patients. If a radiologist is performing an MRI exam of the lumbar spine, for example, it can be important to observe how the patient climbs onto the examination table, because often this reveals much about the patient's posture, mobility, and discomfort and pain levels.

3. Parizel's current preoccupation is with CT

Between now and 2019, the three CT scanners in Parizel's radiology department will be replaced. The tender is currently under preparation, and the plan is to select one manufacturer to maximize the level of discount.

"It's the first time we've combined an acquisition like this," he said. "The tender process involves so much work, time, and effort that it would be ludicrous to have to repeat the exercise three times. It's not rocket science, just common sense."

Dr. Pablo Soffia, a radiologist in the Clínica Alemana in Santiago de Chile and past president of the Chilean Society of Radiology, and his wife, pediatric hemato-oncologist Dr. Julia Palma, visited Parizel's department in 2016. Soffia gave a lecture to staff in Antwerp and will be an invited lecturer at ECR 2017.

4. For the past two years, Parizel has traveled through Latin America & Asia

This is because of the growing interest of Latin American and Asian radiologists in the ESR and ECR. About 16% of ESR members are located in Central and South America. "Their soul is closer to Europe," he said. He is teaching himself Spanish, and, although his knowledge of the language is pretty basic, he can communicate at a simple level without too many problems, and his Latin studies are proving useful.

Asia also remains a very important growth area for ESR, Parizel added, and currently 23% of ESR members are located on the continent. He has visited China, India, and Kazakhstan, and he was very impressed by the high level of knowledge and radiological expertise. His top travel tip is to keep up with e-mails as much as possible, "because otherwise there is an avalanche of emails waiting for you when you get back!" 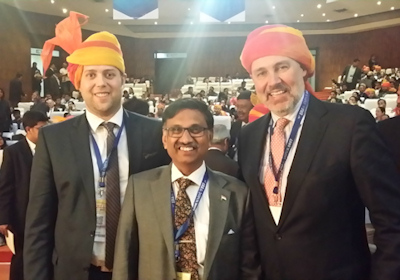 Going native: Parizel was an honorary lecturer and VIP guest at the 70th Annual Conference of the Indian Radiological and Imaging Association in Jaipur in January 2017.

Radiology is seen increasingly as a commodity, a medical specialty that can be run on autopilot, Parizel said. "Too often, radiology is seen as a laboratory producing images, images, and more images. The central role of the radiologist as a consultant physician, a gatekeeper, a key expert is often ignored, probably because the lawmakers and health insurance company managers have only a fuzzy knowledge about radiology. In many medical schools, radiology is struggling to maintain or regain visibility as an independent specialty, and, if medical students do not get sufficient exposure to radiology, they will not know the specialty and will not love it. Moreover, many administrators dream of replacing radiologists with other professionals, such as nurse practitioners, technologists, and radiographers."

Getting to know more than 100 staff members in his department is difficult for Parizel, but lunch meetings are an integral way of keeping in touch with his team.

The 600-bed tertiary referral academic and teaching institution admitted its first patients in January 1979. According to Parizel, "I remember that when we first entered the building, as medical students, it seemed like a huge, ginormous, megalomaniac project. Now the main complaint of our staff is that it is too small, there are not enough beds, not enough consultation areas, and not enough operating theaters. When the hospital was opened, it was the new kid on the block in a hospital landscape that was already highly competitive and saturated."

7. Four radiologists were a source of great inspiration for Parizel

They were Dr. Arthur De Schepper, PhD, at UZA (his mentor in general radiology), Drs. Juan Taveras and Kenneth Davis at Massachusetts General Hospital (his mentors in neuroradiology), and Dr. Danielle Balériaux at Hôpital Erasme and Université Libre de Bruxelles (who introduced him to MRI). He admits he nearly became a civil engineer.

"I thought of engineers as rather boring people, mainly locked up in rooms with slide rules and logarithmic tables, doing complicated calculations. So I decided to go for medicine (my father was a cardiologist). In medical school, I knew I wanted to do something with the brain, but neurosurgery seemed too bloody, while neurology seemed too cerebral and with not enough action, so neuroradiology seemed like a very interesting option." 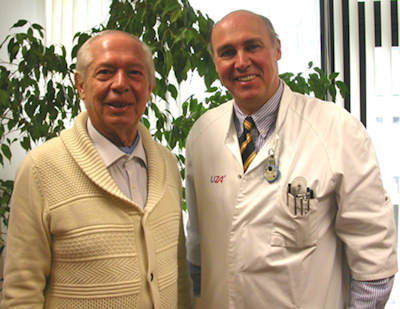 Between 1980 and his retirement in 2003, Arthur De Schepper trained more than 80 radiologists, including Parizel.

8. His main fields of interest are neuroradiology and MRI

Parizel obtained his doctorate in 1994. His dissertation was titled "The influence of field strength on MRI (a comparative study in physicochemical phantoms, isolated brain specimens, and clinical applications)." He continued his research due to a three-year Fundamental Clinical Research grant from the Foundation for Scientific Research in Belgium. His main focus now is on integrating scientific research with patient-oriented clinical applications.

9. Parizel fears for the future of U.K. research after Brexit

"I am convinced that British radiologists, and in fact the entire medical corps, voted en masse to remain in the European Union. But I think it is unavoidable that the U.K., which receives a very big chunk of the pie when it comes to European science subsidies, will now have to get by with a lot less, and radiologists will need to find alternative sources of financing their research," Parizel said. 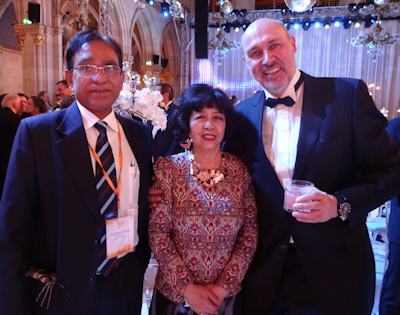 Building relationships with overseas colleagues is a vital part of Parizel's role as ESR president. He is shown here with Dr. Lilian Leong from Hong Kong and Dr. Prabhakar Reddy from Hyderabad, India.

10. Outside of radiology, his passion is political and military history

Parizel grew up in the late 1960s and 1970s, and he has read extensively about the Vietnam War. When living in the U.S., he became fascinated with the American Civil War and has visited many of the battlefields. Recently, he developed an interest in the Napoleonic Wars and Russian history, and he has visited the historic battlefield of Borodino, armed with an hour-by-hour map of the battle.

He also loves cycling and tennis, though a very serious bike accident effectively and irreversibly ended his tennis career in 2014. For more than 25 years, he has been an active member of the Harvard Club of Belgium, the official umbrella organization for over 900 Harvard alumni who live and work in Belgium or maintain strong links with Belgium.

Editor's note: The second part of this interview with the ECR 2017 president will follow next week. It will focus on Parizel's thoughts and observations about the congress in Vienna. 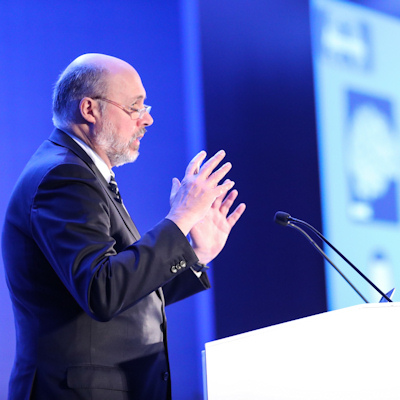 Parizel calls for more standardization of MRI protocols
DUBAI - The development of effective imaging biomarkers can spark a huge improvement in the diagnosis, management, and follow-up of patients with multiple... 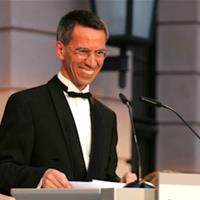 Interview with ECR 2015 President Dr. Bernd Hamm
As the boss of one of Europe's largest radiology departments, Dr. Bernd Hamm is used to coping with immense pressure and a heavy workload. He looks... 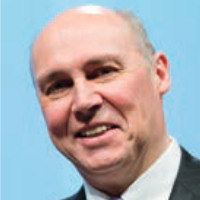