Conflict over recognition for MRI discovery resurfaces at ECR

VIENNA - The long-running and hostile dispute over who should receive credit for the invention of clinical MRI resurfaced during Sunday's Honorary Lecture at ECR 2014.

After many years of intense lobbying, claims, and counterclaims about early research on MRI, the Nobel Committee for Physiology or Medicine must have thought they had resolved the issue in 2003, when they presented the prize jointly to Paul Lauterbur, PhD, a chemist from the University of Illinois at Urbana in the U.S., and Sir Peter Mansfield, PhD, a physicist at the University of Nottingham, U.K., for their discoveries related to the modality. 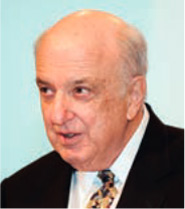 According to Dr. Morton Meyers, a radiologist and historian from East Setauket, New York, U.S., there should have been a third recipient of the award: Dr. Raymond Damadian, founder of Fonar.

"On one level, it [the sidelining of Damadian] illustrates the vindictive retaliation of an entrenched community ... when it is challenged and the weaknesses of peer review and of the integrity of award processes," he said in the Samuil A. Reinberg Honorary Lecture.

Comments from the audience are exceptionally rare after such lectures, but as soon as the applause for Meyers died down, Dr. Peter Rinck, PhD, chairman of the European Magnetic Resonance Forum and president of the Council of the Round Table Foundation, strutted to the microphone with obvious intent.

"You should get your facts and then talk," he said. Rinck added that Damadian had plagiarized earlier work by Dr. Erik Odeblad from Stockholm who should have received a Nobel Prize for medical MRI, because in 1955 he published the first medical nuclear magnetic resonance (NMR) studies, including relaxation time measurements, of living cells and excised tissue.

Meyers responded that with any new advance, there are numerous antecedents that sometimes go back decades. "Your point is well-taken, and I understand the issue you're raising, but to my mind this further represents the difficulty the Nobel committee faces in apportioning due priority and credit," he said.

After the lecture, Dr. Hans Ringertz, PhD, president of ECR 1997 and chairman of the voting committee that awarded the 2003 prize, told ECR Today that he felt Meyers did not present the whole picture. He also said that Meyers should have declared a conflict of interest.

"I'm a little bit frustrated by the fact that there is a group of people around Damadian who are still fighting this issue -- a campaign in a way -- and the fact they are all from the same university where Damadian is contributing economically considerable sums is not mentioned in the presentation," he said, pointing to a series of aggressive newspaper adverts published by the group, strongly urging the Nobel committee to fill the third spot that was available.

During the lecture itself, Meyers cited other cases of scientific misconduct and incorrect behavior.

"Let us ponder here, in conclusion, a few fundamental questions: What are the main factors that determine the attribution of priority and credit? Is it the one who first conceived an idea, who first uncovered the potential of a new observation or finding? Or is it the one who recognized the pattern and meaningfulness in order to establish it as an advance? Or is it the one who develops and nurtures it to bring to everybody's benefit?"

If you like this content, please share it with a colleague!
Related Reading
Mansfield honored at namesake ISMRM lecture
BERLIN - Currently recovering from surgery, Sir Peter Mansfield was unable to deliver a lecture on acoustic noise at the International Society for Magnetic...
MRI pioneer Lauterbur dies
Paul Lauterbur, Ph.D., who received the Nobel Prize for his role in developing MRI, died on Tuesday at his home in Illinois of kidney disease. He was...
Did Damadian’s mercurial past cost him the Nobel Prize?
Despite a newspaper campaign that encouraged readers to send in coupons protesting the omission of Fonar founder Raymond Damadian from the 2003 Nobel...
Fonar presses case for Damadian recognition
MRI developer Fonar of Melville, NY, has stepped up its efforts to pressure the Nobel Prize committee to recognize the work of its founder and president,...
Fonar NYT ad decries 'shameful wrong' in MRI Nobel award
A full-page ad in today's New York Times says the Nobel Prize committee "ignored the truth" when it decided to award the 2003 Nobel Prize for medicine...
Last Updated np 3/12/2014 12:41:07 PM