All Dutch institutions were asked to recall their patients and to operate on them if they found the PIP implants were ruptured. It is still up for discussion whether the implants should be removed if they haven't ruptured. Because of this mandate, the accuracy and interobserver variability of MRI is even more relevant as MRI will determine the need for surgery. 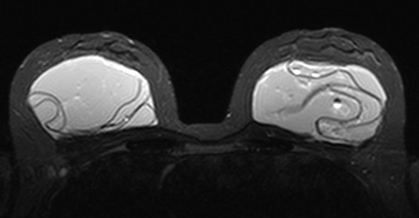 A prospective cohort study out of the Netherlands included 107 women with 214 PIP silicone implants who underwent explantation preceded by short-tau inversion recovery (STIR) MRI. Most of the patients were asymptomatic (70%), and all patients had not previously visited a doctor -- the women wouldn't have been seen if it weren't for the recall, according to Marike Maijers, a doctoral student and resident in plastic surgery at VU University Medical Center in Amsterdam. Maijers wrote her thesis on safety in the imaging of silicone breast implants, with a particular focus on PIP implants.

The study involved two reporting rounds. In the first round in 2011, three radiologists went about their normal, day-to-day work and imaged women as they came in; last year, two of the three radiologists were asked to re-evaluate all images again in dedicated time slots, blinded to earlier results and explantation.

A structured protocol was developed to describe the MRI findings, and the ex vivo findings served as the reference standard.

"We were inspired by BI-RADS, because what we saw in the first round was sometimes the text of some MRI reports were inconclusive," Maijers said. "It was up to the plastic surgeon to decide whether the radiologist thought [the implants] were ruptured, yes or no. Sometimes only signs were mentioned or there wasn't really a conclusion. So we forced radiologists into a conclusion by using a level of confidence [called the Silicone Implant Reporting and Data System, or SI-RADS]."

In 208 of the 214 explanted prostheses, radiologists agreed independently about the condition of the implants. In five of the six cases in which they disagreed, they subsequently reached a nonimposed consensus, she said.

"To conclude, this study was one of the first to be free from any biases, because we were sort of lucky because of the recall, and we captured women with no symptoms," she said.

"MRI has a high accuracy in diagnosing rupture, and it's a consistent test if we look at the kappa values of interobserver agreement," Maijers said. "And we do advise to use this simple, uniform reporting protocol, as we feel it definitely improved the communication between the radiologists and plastic surgeons." 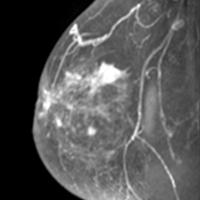 MRI adds to cancer detection in women with breast implants
When used as an adjunct to mammography and ultrasound, MRI can find additional cancers and provide more detail about their location in patients with breast...

Politics blocks widespread use of breast MRI for implants
VIENNA - In the region served by the Ribera public hospital, around 10,000 women have received defective Poly Implant Prothese (PIP) implants, a population...
Radiotherapy's impact on breast implant failure still unclear
Does radiation therapy affect the failure rates of implants used for breast reconstruction after a mastectomy? Although a study published online September...
FDA: Breast implants reasonably safe, but still get checkups
Breast implants filled with silicone gel have a "reasonable assurance" of safety and effectiveness when used as labeled, but women still should have routine...
Copyright © 2014 AuntMinnie.com