VIENNA - Europe might not be ready to start screening all high-risk individuals for lung cancer, according to Friday talks at ECR 2014 that addressed the question from both the U.S. and European perspectives.

Unlike the large U.S. National Lung Screening Trial (NLST) that showed a 20% mortality benefit from screening, trials in Europe have recruited fewer patients, and they haven't yet shown significant mortality reductions. That's understandable because those trials have had comparatively less time to follow their screening subjects, and they generally screened subjects at lower risk of lung cancer from the start. 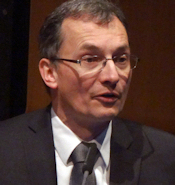 But the effort has paid off in other ways, as European radiology used its long experience in screening to become the leading authority on nodule management, coming to understand in a unique way which nodules to follow and which to let go, according to Dr. Mathias Prokop, PhD, professor of radiology and department chair at Radboud University Nijmegen in the Netherlands. Time will tell if CT-based screening will be the solution for the high mortality rates associated with lung cancer from smoking, he said.

"There are contradictory results to NLST, and we don't know yet," Prokop said. "The European studies we have now are too small, and we actually don't know what's going on there."

On the other hand, Europe has learned how not to screen -- for example, by avoiding hard size-based thresholds for what constitutes a positive screening result. "The reason for that is some nodules have morphologic criteria that make them likely benign, even if they are large, or likely malignant, even if there are very small," he said. Morphologic assessment is key to malignant potential.

Similarly, growth assessment is a tricky job depending on the nodule being followed, and volumetry is the only possible way to measure nodule size. One-time commercial screening programs are bad news because they create more opportunities for litigation than they actually detect cancers, Prokop added.

If screening is to be done, it should be reserved for high-volume centers that know what they're doing, he said. It should also rely on radiographers to help with the reading, and it should use computers to keep the quality high and keep personnel from jumping ship to avoid death by boredom.

An advantage of European CT screening trials is that most have used isotropic data, Prokop said. On the other hand, participation has been low: only the Nederlands-Leuvens Longkanker Screenings Onderzoek (NELSON) screening trial has achieved any kind of critical mass. Yet even that trial, which recruited 15,000 patients and just added another screening round at year six, had grander designs, with an expected 40,000 patients that never materialized. However, the first outcomes data are expected within two years, he said.

Meanwhile, the Danish Lung Screening Trial (DLST), with 4,000 screening subjects, and the similarly sized Multicentric Italian Lung Detection (MILD) trial have published their first outcomes data. Also, the U.K. Lung Cancer Screening (UKLS) trial has finished its screening rounds, as has the German Lung Cancer Screening and Intervention (LUSI) trial. But that's not to say that any of the trials have emerged as a glowing endorsement of low-dose CT screening.

In DLST, 46 people died in the screening arm, compared with 31 in the control arm. "Why is that? We don't really know," Prokop said. The trial found a lot of early-stage cancers, which is good, but also a lot of late-stage cancers, which is not. Adenocarcinomas have been found to be more prominent in screened cancers because they are mostly slow-growing.

"It basically means we have to be cautious," he said. "The published trials have shown no positive effect; most have shown a negative effect in all-cause mortality," due to their short follow-up (34 to 48 months versus 78 months for NLST) and smaller size. Most important, the inclusion criteria in European trials have been less stringent, with most requiring 20 to 40 pack-years of smoking history, compared with 30 for NLST, and the results have borne out those differences so far.

Once the NELSON data are published in two years, "we'll see whether that will go more toward the direction of the NLST trial," which spoke strongly in favor of screening, Prokop said.

On the brighter side, Europe has made good use of its screening trials to learn all about what works and what doesn't in terms of nodule management, according to Prokop. For example, perifissural nodules (PFNs), which are probably caused by lymph nodes close to fissures in the lung, can grow rapidly and look quite malignant. But Hoop et al (Radiology, 2012, Vol. 265:2, pp. 611-616) found that none of the 919 perifissural nodules they followed developed into a malignancy, despite malignant-appearing growth rates of 5% to 8%.

"These triangular lesions look very different from malignant PFNs, which have a more classic rounded shape," Prokop said. "They usually grow rapidly, and then they usually shrink again. They are lymph nodes, so they react to infections in the lung." You can't distinguish malignant from benign by looking at the growth rate, so forget about them, he said.

"It looks like smooth lesions and lesions attached to something like fissures have extremely low cancer rates," Prokop said. "On the other hand, lesions that have volume doubling times of less than 400 days have a higher rate of malignancy."

In 2009, Xu and colleagues also found that lobulated (3.5%), intraparenchymal (3.9%), 130 mm3 and larger (5.8%), nonspherical (7.3%), or spiculated (14.5%) lesions had higher malignancy rates, he said. And using NELSON data, Horeweg et al reported last year that there are more cancers in the right than left side of the chest, in the upper than lower lobes, and in the peripheral lung versus the central lung parenchyma.

So location, morphology, and size all make a difference. But how do you measure nodules? Using calipers to show lesion diameter leads to wildly different results, sometimes making a significant growth look very minor, Prokop said. For example, using calipers, a 1-pixel difference in nodule size produced a 1.8% growth rate by diameter for one lesion, but when the same lesion was measured volumetrically, there was 15% growth.

It's become clear that diameter measurements aren't suitable for nodule measurement, according to Prokop. The problem is that no volumetric measurement is the same, even when the same patients are scanned twice in rapid succession, as reported in 2007 by Gietema et al.

"So if you want to use software to measure lesion growth -- and you should -- you need to use the same software for baseline and follow-up scans," he said.

Growth rate matters, too, at least for most nodules. Looking again at nodules in the NELSON trial, van Klaveren et al reported in 2009 that volume doubling time of 400 days or less was associated with a 75% malignancy rate. In comparison, this rate was 9% for nodules that doubled in size in 400 to 600 days and zero for nodules at 600 days or more, Prokop said.

What investigators call positive has a big effect on yields in lung cancer screening and on false-positive rates, Prokop noted. For example, NLST labeled as positive any noncalcified nodule 4 mm or larger, but it conferred a false-positive rate of 94% to 96%.

NELSON criteria are more cautious, characterizing as positive the solid component of any nodule larger than 500 mm3, any solid component of a pleural nodule 10 mm or larger, any growing nodules with a volume doubling time of less than 400 days, and any nonsolid nodule that grows 20% or more by volumetry. Using these criteria, the false-positive rate drops substantially to 58% to 64%, and the positivity rate rises to 1.8% to 2.4%, handily outperforming NLST.

Changes to the NELSON criteria for positivity in 2002 produced other improvements in follow-up, Prokop said. Neglecting perifissural nodules cut out 25% to 30% of all follow-up. Three-month follow-up for 5- to 8-mm nodules is too short due to variations in volume doubling times; six months makes much more sense, he added.

Three-month follow-up for ground-glass nodules (GGNs) is also too short because of how slowly GGNs grow, if they grow. One year and even up to two years for pure GGNs is sufficient. Part-solid nodules are managed based on the solid component; if larger than 10 mm, they can be treated first with antibiotics to see if they resolve, Prokop said.

The experience with NELSON -- more than 100 screenings a day for years -- has made it clear that screening is a huge job that can wear out radiologists and radiographers alike, Prokop said. In his center, radiographers do the reading, and radiologists are called in only when there is a suspicious lesion.

"The problem you run into is that screening is really, really boring work," he said. "It wears you down big time ... and it also wears down your radiographers. The one who did that [for us] basically quit because she couldn't stand it anymore. It's nice to talk about screening, but really doing it means you need massive amounts of personnel, and have them do something in between times or otherwise they'll be dying of boredom."

Radiographers don't perform quite as well as radiologists in lesion detection, but the differences are relatively minor, he said. Fatigue is a bigger problem, and computer-aided detection (CAD) can help. The hope is that someday soon it will become the first reader of choice.

"If you really want to do screening, you need computers because they can speed up your workflow, do the volumetry and mass measurements automatically, and you can do all the calculations of volume doubling times," Prokop said. In addition to lesion detection, CAD may also soon be able to estimate the risk of malignancy based on nodule density and morphology.