Russian radiology prepares to step into limelight at ECR 2014


When the ECR begins on 6 March, these phrases are likely to be heard ringing out through the corridors of the Austria Center: dobroe utro (good morning), rat teebya veedet' (nice to see you), kak pazhivayesh? (how are you?), neeploha (not so bad), bal'shoye spaseeba (thanks very much), and da sveedaneeya (goodbye).

For the first time, there will be a Russian president of the congress: Dr. Valentin Sinitsyn, professor and head of the radiology department at Moscow's Federal Center of Medicine and Rehabilitation, who is also one of the youngest ECR presidents at 53. As of 5 February, 390 Russian delegates have already preregistered for ECR 2014, compared with the 410 Russian radiologists who attended ECR 2013, and many of the nation's attendees are participating in this year's event as speakers and moderators.

"Having an 'ESR [European Society of Radiology] meets Russia' session at ECR 2014 speaks to the recognition of Russian radiology by the European and international radiological community," Sinitsyn noted. "In some aspects, it reflects the ever-increasing activities of radiologists and radiographers from my country. This year we have witnessed a 160% growth in the submission of oral papers for the ECR from Russia. I hope that this trend will continue in future congresses." 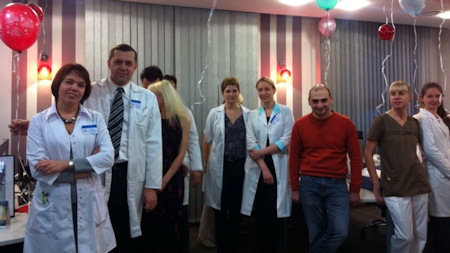 Sinitsyn (second from the left) celebrated his 53rd birthday last year with colleagues from his department. On the far left is Dr. Elena Mershina, who is his deputy and an active member of ECR subcommittees. The duo has worked together for almost 20 years. All images courtesy of Dr. Valentin Sinitsyn.

During Friday's session, the Russian Association of Radiology, led by its president, Dr. Nadezhda Rozhkova, and Dr. Igor Tyurin, chief expert in diagnostic radiology at the Russian Ministry of Health, will discuss CT perfusion in the differential diagnosis of central nervous system pathology and advances in imaging of pancreatic masses. Tyurin will also give a presentation on tuberculosis management, which is a real challenge for a national radiological service in a country as large as Russia. The panel discussion will address future developments in Russian radiology and explore which paths to take.

Russian radiographers will be involved in another plenary session. The European Federation of Radiographer Societies (EFRS) is organizing an "EFRS meets Russia" session. A direct flight between Moscow and Vienna takes only 2.5 hours, and this means ECR is relatively easy and cheap for Russian radiographers and radiologists to attend, particularly compared with RSNA, according to Sinitsyn. 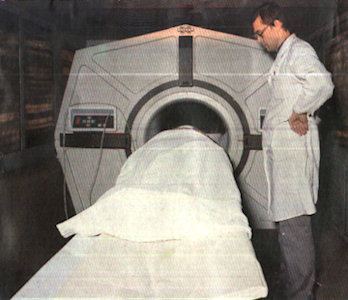 The first MRI machine was installed in the former Soviet Union in 1984 at Sinitsyn's previous hospital, the Cardiology Research Center in Moscow. This photo was taken in 1986. In 2008, he started to work in his current institution, the Federal Center of Medicine and Rehabilitation in Moscow, and he helped to produce Russia's first MR images of the heart.

"Overall, there has been a sharp rise in publications by Russian radiologists, and they are becoming more and more visible on the world stage, but we can't expect too much to happen all at once," he said. "The long-term goal is to bring more Russians into ESR, and this tendency will increase."

Historically, Russians' ability to present in English has been a major obstacle, but this is gradually becoming less of a problem, particularly among the younger generation, he added. Russian school children are now learning English at a much younger age; for instance, Sinitsyn's five-year-old grandson, Dima (Dmiytry), can already communicate in basic English, whereas he himself did not learn the language at all until he was 12 years old.

Family life is very important to Sinitsyn. In these photos, he is shown with his mother, Raisa, and his older grandson, Dima. His younger grandson is called Kirill.

Sinitsyn is the oldest person working in his own department constituting 25 full-time radiologists and 40 full-time radiographers. Also, he very much welcomes the lower average age of ECR participants, which reflects the emphasis on youth of the ESR and its strategy to involve more trainees in the congress. A decade ago, the average age of ECR attendees was 47, but now that figure is nearer to 40.

Although he accepts that making available more of the congress materials online might deter a small number of potential delegates from attending ECR, Sinitsyn remains convinced that the number of participants in the meeting will continue to rise steadily.

"Face to face meetings with people are always more pleasant and valuable, and it's important to get away from the daily routine," he said. "It's also essential to remember the fun element of going to conferences and meeting new people. You can't put a price on that, and you can't replace it with a digital experience."

The organizers of ECR 2014 hope that displays of Russian culture and music will add to the enjoyment of attendees. There will be a performance by Russian artists and musicians, the vocal ensemble Kumushki and the trio Artlang, who will play and sing at the congress on Friday, 7 March. There will also be performances during the lunch break on the special stage in the entrance hall. 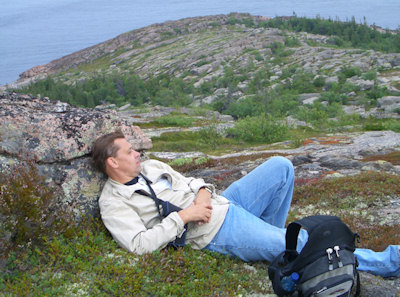 In his leisure time, Sinitsyn enjoys hiking, particularly with his wife Maria, who is an assistant professor of internal medicine in Moscow. He is shown here in Solovki, an archipelago located in the Onega Bay of the White Sea.

Along with the congress committee members and ESR staff, Sinitsyn has worked tirelessly over the past year or more in promoting ECR 2014 and to build a successful meeting. He has taken about 30 overseas and domestic flights during the last 12 months. During the second half of January alone, he attended meetings in Vienna, as well as going to the Mexican national radiology conference in Mexico City and the Arab Health show in Dubai, United Arab Emirates. In addition to Russia, the other two host nations for ECR 2014 are Mexico and Serbia.

Sinitsyn hopes these efforts will bear fruit when the conference takes place between 6 and 10 March.

Editor's note: In the second part of our series of articles looking forward to ECR 2014, we will be asking what's new at this year's congress. Check back for part two next week.

Vienna's 20th ECR: Hidden gems and other reflections
ECR 2014, which begins on 6 March, is the 20th ECR to be held in Vienna. Four European radiologists, including three members of AuntMinnieEurope.com's... 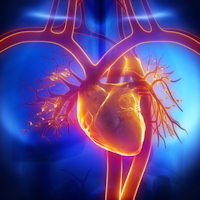