VIENNA - Go back to basic anatomy and mechanism of injury to understand which structures could possibly be injured in a particular scenario. That was the overriding message of a leading musculoskeletal (MSK) radiologist in a lunchtime session on trauma on Thursday at ECR 2013.

Born in Lebanon and of Armenian origin, Dr. Ara Kassarjian trained at Harvard University Medical School in the U.S. and now works as a consultant radiologist in Corades, S.L., Madrid. Speaking in a room bursting at the seams with audience members keen to learn from his wide experience, he focused on joints in acute trauma and the best ways to image and interpret the scans with various modalities. 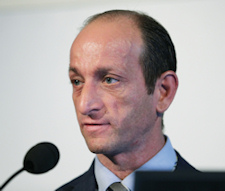 When you see an injury, you need to know what the other associated injuries might be so you know to look for them, according to Dr. Ara Kassarjian of Madrid. Image courtesy of the European Society of Radiology.

"Importantly, my main message is that when you see an injury, you need to know what the other associated injuries might be so you know to look for them," he remarked. "If you don't look for them specifically, then you won't see them."

He added that if you know what to expect, then you can focus in on the situation in hand, specifically the mechanism of injury. "If the scan you already have is not sufficient, then you need to know which imaging modality to move on to next. When the imaging and clinical scenario don't match, as is often the case, it's important to know what to look for."

Kassarjian's talk took the listeners on a journey through typical musculoskeletal injuries that a general radiologist might come across from upper to lower extremities, pointing out possible injuries that might easily be missed.

One of the most common injuries seen by generalists is the anterior cruciate ligament (ACL) injury often seen in skiers and footballers. "After a radiologist has made a diagnosis of the ACL tear, the associated meniscal injury, and maybe a medial collateral meniscus injury, as well as bone contusions due to the mechanism, they always have to look at the posterolateral corner and the posteromedial corner specifically, because injuries to these structures will alter outcomes if they are not addressed at surgery," Kassarjian warned.

Driving the point home, Kassarjian added that a general radiologist might not know the names of all the ligaments and structures in the posterolateral corner, but they should be aware that there is a need to look for injury there. He added that if edema and distortion of the anatomy are found, then a radiologist needs to raise the possibility of posterolateral injury.

"Get the textbook and look up the ligaments there, and if you can't actually see them, then they are probably injured," he asserted.

"Even if a radiologist does a great job of diagnosing the ACL injury and the meniscal injury, if you miss the posterolateral corner injury and the patient is operated on to repair the ACL, they may still have an unstable knee postoperatively, leading to a worse prognosis."

Kassarjian's experience extends from common everyday sports injuries to those experienced by elite athletes in major sporting events in Boston and Spain and professional tennis players on tour. He is the tournament staff physician for Madrid Open Tennis. "When you work with elite athletes, you need to know all the basic information, mechanisms, and lesions but to a greater level of detail, because different activities have different sports-specific injuries. You need to know the sport to understand the significance of the lesion."

In his take-home message, Kassarjian highlighted that, instead of trying to memorize all the fine detail, radiologists should go back to basic anatomy and the mechanism of injury to help explain the structures that are most likely to be injured in any particular case.

"Musculoskeletal injury is all about anatomy. With MRI we see a lot more anatomy than we saw in medical school, so you have to go back and learn the details if you want to read these scans."