March 14, 2019 -- Cancer detection could receive a boost from two new radiotracers that have achieved substantially shorter image acquisition times than FDG-PET scans and required no fasting or dietary changes, according to a proof-of-concept study published in the March issue of the Journal of Nuclear Medicine.

The radiotracers are based on gallium-68 (Ga-68) and act as a fibroblast activation protein inhibitor (FAPI). They are considered a new class of radiopharmaceutical, designed to target cancer-associated fibroblasts, which promote tumor growth, migration, and progression. In fact, fibroblast activation proteins are present in more than 90% of epithelial carcinomas -- including breast, lung, colon, pancreatic, and head and neck cancers -- making them a viable option for both diagnostic imaging and therapy.

"Having an additional diagnostic tool opens up a new door for cancer patients," added study co-author Dr. Uwe Haberkorn, professor of nuclear medicine at the University Hospital Heidelberg and the German Cancer Research Center in Heidelberg, in a statement. "For those who are facing unmet diagnostic challenges -- unclear tumor segmentation for radiation therapy, suspicion of false-negative findings, or selection of last-line experimental treatment -- Ga-68 FAPI may help to provide answers."

In this study, the researchers used Ga-68 FAPI in scans of 50 patients who appeared to have an abundance of fibroblast activation proteins and whose conditions could not be definitively diagnosed through conventional means. Preliminary dosimetry estimates for Ga-68 FAPI-2 and Ga-68 FAPI-4 were based on two patients who were examined 10 minutes, one hour, and three hours after tracer injection. PET/CT scans (Biograph mCT Flow, Siemens Healthineers) of tumor patients were acquired one hour after injection, with 25 subjects given Ga-68 FAPI-2 and the other 25 administered Ga-68 FAPI-4 (J Nucl Med, March 2019, Vol. 60:3, pp. 386-392). 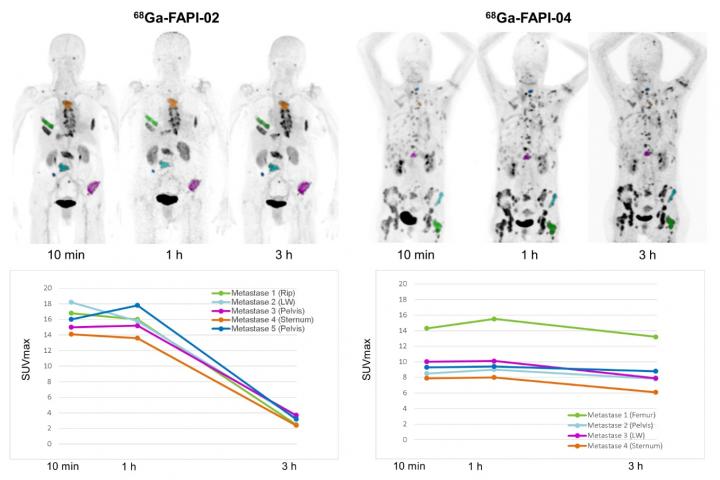 PET images of Ga-68 FAPI-2 and Ga-68 FAPI-4 were obtained at 10 minutes, one hour, and three hours after injection. Rapid tumor targeting and fast blood clearance are followed by a long plateau phase without relevant change in image contrast (top). In comparison with Ga-68 FAPI-2, Ga-68 FAPI-4 is characterized by a prolonged tumor retention time (bottom). LW = lumbar body. Images courtesy of Giesel et al and the J Nucl Med.

The tracers provided high-contrast images with quality equal to or better than that of the standard FDG-PET/CT imaging, without the need for patients to undergo any dietary restrictions or a fasting regimen before the scans. All of the patients tolerated the examination well, with no reports of any adverse symptoms or reactions.

"A shorter waiting time and shorter scan time can increase patient comfort, which can be especially important for sick patients," Haberkorn added. "The possibility of early imaging -- for example, after only 10 minutes instead of an hour -- could also play a part in simplifying clinical workflow."

Given these preliminary findings, the researchers are hopeful FAPI PET imaging someday may be used to assess and manage cardiac diseases or fibrotic diseases of the lung, liver, and kidneys.