March 20, 2013 -- PHILADELPHIA - Vendor-neutral archives (VNAs) can save millions over a traditional PACS storage model, while improving efficiency across a healthcare enterprise, according to a March 18 presentation at the Society for Imaging Informatics in Medicine (SIIM) regional meeting.

At the Children's Hospital of Philadelphia (CHOP), implementing a VNA will save the institution nearly $3 million over five years by avoiding the costs associated with a conventional PACS storage model, according to Christopher Tomlinson, administrative director for radiology. He spoke on Monday about integrating a VNA into a PACS production environment. 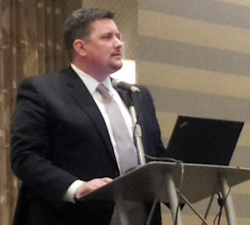 Christopher Tomlinson, administrative director for radiology at the Children's Hospital of Philadelphia.

CHOP first installed PACS in 2000, followed by full dictation capability in 2002. In 2005, the institution implemented an enterprise medical storage platform. A VNA was installed in 2009.

The institution then launched a teleradiology company in 2010 to utilize the VNA with functionality to support healthcare information exchanges (HIEs) and teleradiology to be able to move patient data between different sites within and across the region, Tomlinson said.

An enterprise clinical viewer was also installed in 2010. Additional "-ologies" began coming online to the VNA in 2011.

The institution's VNA was provided by Acuo Technologies, while Philips Healthcare's iSite software serves as the institution's diagnostic viewer. Medical Insight's EasyViz is used for the enterprise viewer, while CHOP's electronic medical record (EMR) and RIS are furnished by Epic Systems.

One of the driving factors in the decision to implement a VNA stemmed from the institution's move to a new PACS software, iSite, in 2009. However, iSite at the time couldn't work with third-party archives, and the vendor's iVault storage solution was expensive, he said.

In examining the five-year ownership cost of PACS with a couple different vendors, the traditional PACS archive strategy was estimated to cost CHOP $2.84 million, including conversion, migration, project management, and other costs. Switching to a VNA approach with an iSite image viewer, however, would avoid these costs, Tomlinson said.

In addition, going the VNA route would improve current and future asset utilization as data volumes skyrocket; it also would reduce future data migration effort and costs, he said.

Switching to a vendor-neutral platform would work with any application, hardware vendor, or storage tier. Any new PACS viewer could also be able to access images using standard formats, he said.

CHOP also saw the opportunity for improved efficiency and patient care. Physicians could look up a patient's image record at their own diagnostic desktop. The performance, uptime, and reliability of radiology systems would also be enhanced, Tomlinson said.

Radiology, cardiology, oncology, nuclear medicine, and other departments could also view images across the enterprise at their own desktops within the departments, he said.

When choosing to pursue a VNA, it's important that PACS be removed as the center of the universe, he said. In addition, one vendor must be designated as accountable for the overall system.

A policy covering information lifecycle management (ILM) should be determined prior to the implementation phase so that the PACS storage vendor and VNA vendor don't duplicate image storage, he said.

Tomlinson also noted that redundancy and parallel processes offer great uptime, but they are difficult to troubleshoot.

"Make sure your vendors can work with each other and have experience doing so," he said.

The VNA also doesn't have great dashboard tools at the moment, which is something to be aware of, he said. He also emphasized that disaster recovery work and business continuity plans should be performed in parallel with the project.

"Make [disaster recovery and business continuity] a deliverable for all of your vendors that are involved, so that you're not chasing them after the fact," he said.

A number of VNA components are still developing in the market, Tomlinson said.

For example, enterprise viewers for all "-ologies" are still maturing, making it difficult to find a viewer that can please everybody. Some zero-download clients may also have trade-offs on features, he said.

Handling of image presentation states and annotations needs to be accounted for in the VNA. Because DICOM is probably not going to become the standard for all "-ologies," the handling of non-DICOM data also needs to be addressed, Tomlinson said.

"Are you 'wrapping' everything in DICOM, or do you have an archive that handles document management in medical imaging?" he asked.

Other current challenges with VNA include determining what is going to be used to drive image workflow as workflow moves from a radiology-centric model to an enterprise-centric approach. The inclusion of video from departments such as the operating room, endoscopy, and interventional radiology/cath is also looming, Tomlinson said.

"And get ready for the big slides in pathology," he said.

Those planning to implement a VNA should be sure to cut through the sales/marketing hype, Tomlinson recommended. It's also important to find the right partner.

"In my opinion, a VNA and a PACS vendor are two different things," he said. "To me a PACS vendor that owns your archive kind of defeats the whole purpose."

The information systems department should also be engaged. "Allow them to 'own' enterprise imaging but not radiology strategy," he said. "That difference is key."

Radiologists should be empowered to "own" their viewers, but the clinicians should "own" the enterprise viewer, Tomlinson said.

He also advises creating an enterprise imaging governance committee to drive decision-making. This committee should include creators of data such as radiology, cardiology, pathology, etc., as well as users of data such as orthopedics, urology, the emergency department, and so on, he said.

In the end, keep in mind that enterprise viewers are not PACS viewers, Tomlinson said.

"When you change them, you're going to get some pushback," he said. "Make sure to manage that, and make sure people know why you're doing it and don't think that you are taking away a radiology viewer with all of this functionality and giving them a clinical viewer in its place."